Ethnic intolerance has surfaced in an increasingly vicious political battle. 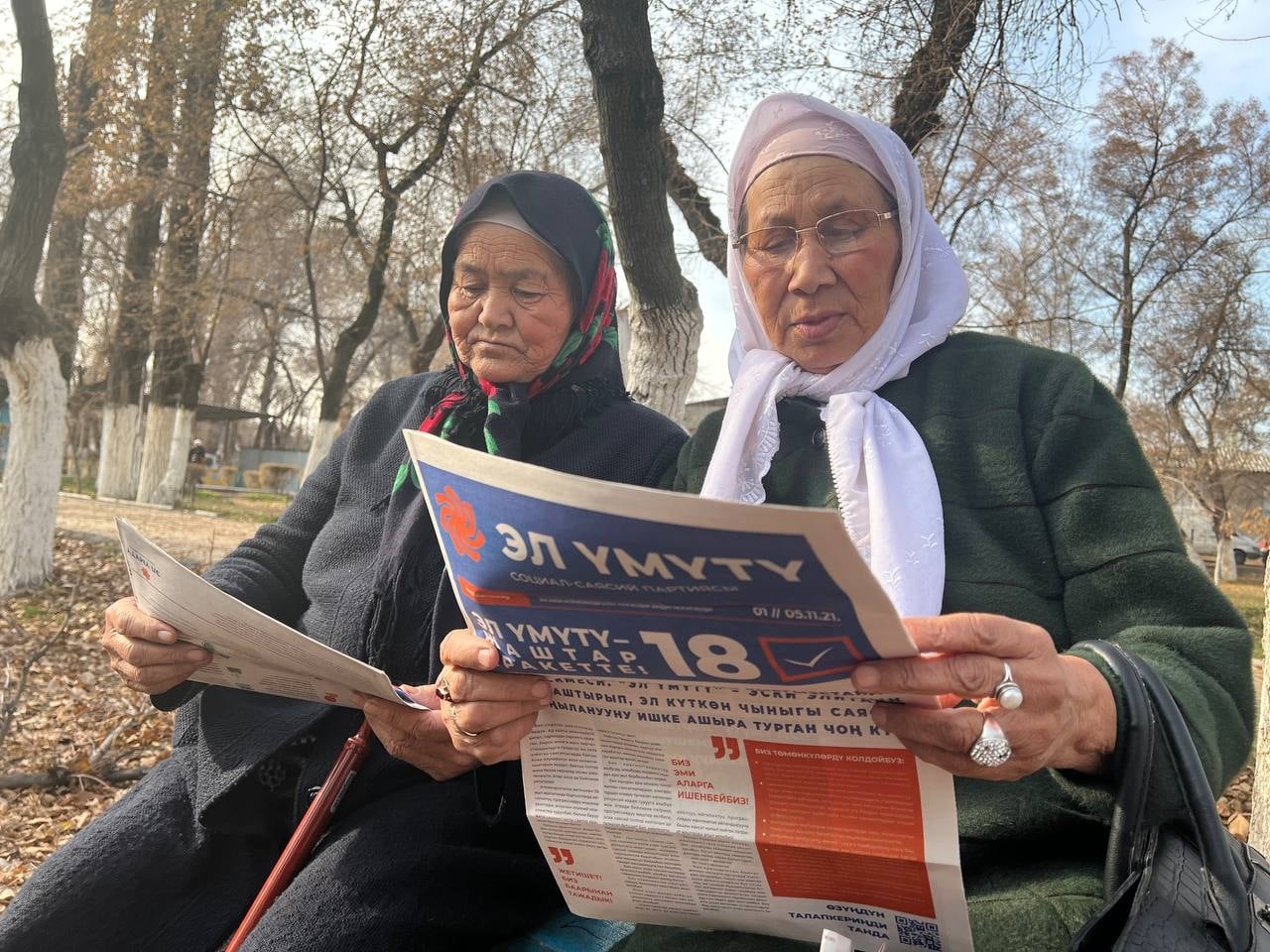 Read all about it – but not in Uzbek? (El Umutu/Facebook)

With a large chunk of the population in the southern Kyrgyzstan city of Osh being represented by the ethnic Uzbek community, disseminating at least some advertising material in Uzbek ahead of this month’s parliamentary elections feels like politics 101.

The first candidate in the city to produce campaign material in three languages – Kyrgyz, Russian, and Uzbek – was Sherzod Sabirov, who is running with the newly formed El Umutu, or People’s Hope, party.

Sabirov’s attempt to broaden his electoral appeal has been met, however, with voluble indignation, highlighting how intercommunal tensions are liable to be exploited. Osh was the epicenter of ethnic violence in 2010 that left hundreds of people, mostly Uzbeks, dead.

“We live in Kyrgyzstan. The core ethnic community in this country are the Kyrgyz. That means all signs and shop names, and election material, should be written in the state language,” 48-year-old Osh resident Kalmurza Mamatkadyrov told Eurasianet.

While Kyrgyz and Russian are both official languages in Kyrgyzstan, Uzbek is not and should not enjoy its same status in society, said Mamatkadyrov, echoing a widely expressed view.

Sabirov, 35, an ethnic Uzbek businessman, is dismayed by the furor, but he suspects there may be more to this claimed indignation than meets the eye. He says that despite his party’s brief history, its apparent popularity has rivals running scared.

“El Umutu is for them a real splinter in their eye, because we will without a doubt be taking away a part of their votes. That is why they have resorted to such unpleasant measures, up to and including smearing me just because I spoke to voters in Uzbek during my meetings with them,” Sabirov told Eurasianet. “They’re afraid of the fact that members of our young party are telling the truth and opening people’s eyes.”

Sabirov said that people in any country are fully entitled to speak in whatever language they wish and that there is no law that prevents it.

Indeed, in previous elections, such as the abortive parliamentary polls held last October, other parties used Uzbek advertising materials without provoking any scandal at all. The same is happening now.

“Besides us, there are other parties, like Ata-Jurt Kyrgyzstan, which are using Uzbek, but nobody is outraged by that for some reason,” Sabirov said.

The main allegation circulating in nationalist Kyrgyz-language social media circles is that an election poster featuring Sabirov violates the law. Critics of his campaign materials have gone so far as to reach out to election officials.

“We were approached by a group of Osh residents who provided Uzbek-language campaign materials belonging to the El Umutu party and they demanded that measures be taken against the candidate in question,” Bakyt Almatov, the head of the Osh territorial election commission, told Eurasianet.

Almatov said the rules require them to pass on the complaint to law enforcement bodies, who are required in turn to determine whether the poster is in fact illegal.

But given that the original charge was so spurious, the whole matter quickly ran its course.

Interior Ministry spokesman Zamir Sydykov said there was nothing for the police to do since no known offense had been committed.

“We do not have the authority to punish anyone for this or take other measures,” Sydykov said in an interview with Eurasianet.

Rights activists are still worried about these developments, however, seeing them as evidence that interethnic intolerance is still being deployed for devious political ends, even though the country’s laws afford some formal degree of protection to minorities.

Utkir Jabbarov, a lawyer for Spravedlivost, a rights advocacy group based in the southern city of Jalal-Abad, reprised the point that there was nothing in Kyrgyz legislation that prevented politicians from using whatever language they pleased.

“Our laws state that the Kyrgyz Republic guarantees representatives of all ethnic groups in Kyrgyzstan the right to preserve their native tongue, to create the conditions for its study and development, and, therefore, to use it during political campaigns,” Jabbarov said.

That the ethnic card is being played attests to the viciousness with which the political battle is being waged ahead of the November 28 vote. The number of seats in the coming legislature will be only 90, down from the current 120. With the threshold thus raised, the competition feels more desperate.

“The less time that is left before parliamentary elections, the more opponents resort to dirty political strategies and vilifying each other through all kinds of techniques. Sometimes this can take the form of referring to the ethnicity of candidates,” political analyst Mars Sariyev told Eurasianet. “This is all creating strong tension.”