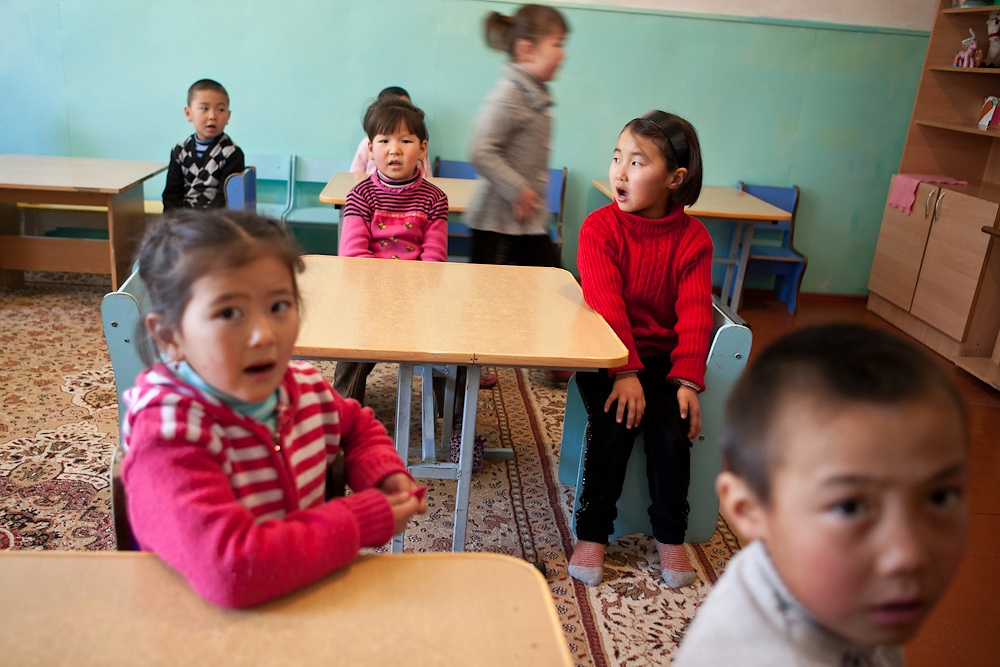 Children sing in a Kyrgyz-language kindergarten in Barskoon, located on Kyrgyzstan’s Lake Issyk-Kul, in February 2013. Most schools teach in Kyrgyz or Russian, while Uzbek-language schools are becoming fewer, dropping from 141 Uzbek schools in 2002 to 91 schools in 2012. (Photo: David Trilling)

Among the numerous recent hardships endured by Uzbeks in southern Kyrgyzstan, the closure of Uzbek-language schools ranks among the most discouraging.

Uzbek schools were already starved of funding before the outbreak of inter-ethnic violence in southern Kyrgyzstan in 2010, during which Uzbeks suffered disproportionately. But the closure rate has accelerated over the past two-plus years.

“A human should be educated in his or her native language, and then in other languages. Every year the number of Uzbek schools is decreasing,” said Izatilla Rahmatillaev, the head of Law & Order, a legal-support non-governmental organization (NGO) in Osh, Kyrgyzstan’s southern capital. “Today, constitutional norms in relation to the Uzbek minority are not respected.”

Over the past decade, the number of students enrolled in Uzbek-language schools – where Uzbek is the primary language of instruction – has fallen by over 60 percent. Officials contend Uzbeks are choosing to send their children to Kyrgyz schools to learn the state language. They also claim that Uzbeks themselves are requesting the conversion of schools from Uzbek to Kyrgyz. But many Uzbeks counter that no one sought their input, and tell EurasiaNet.org they are opting for Russian-language schools, rather than Kyrgyz-language.

“Ethnic Uzbek parents are outraged,” said Rahmatillaev, himself an ethnic Uzbek. He added that many are afraid to complain, even though their children are at a disadvantage.

Developments in the Nookat District, southwest of Osh, reflect the school-closure trend. Seven Uzbek schools in the district were converted in 2012, according to Abdumitalip Payazov, the deputy head of the Education Department there. Out of 109 schools in Nookat, 13 continue to offer instruction primarily in Uzbek, he added. “Most likely, in the coming years they will be converted into Kyrgyz, too,” Payazov said. “Parents want their children to be educated in Kyrgyz, so they will have employment opportunities in the future to work in government.”

Madina Akhmezhanova, a young Uzbek mother of two, is among those who are grappling with the new reality. She has decided to enroll her six-year-old son, who will start school this September, in a Russian school, rather than an Uzbek one, because she expects the nearby Uzbek school will be closed within a few years, interrupting her son’s education.

She also believes that an education in Russian will present her son with more opportunities than one in Kyrgyz. “Many Uzbeks are trying to get out of this country, to obtain Russian citizenship because there is no future here for the Uzbek language and Uzbeks,” said Akhmezhanova, a housewife from Osh. Her concerns appear justified: Gulmira, a cloth trader in Osh, says her 13-year-old son is struggling since his Uzbek-language school was suddenly converted to Kyrgyz last year.

Kyrgyzstan’s constitution guarantees minorities the right to study in their native tongue. Uzbeks, the largest minority, comprise approximately 14.4 percent of Kyrgyzstan’s population, according to the latest census, which lists 22 minorities. On a practical level, Kyrgyz officials are unable to develop curricula in all minority languages. Currently, schools operate in Kyrgyz, Russian, Uzbek and a few part-time in Tajik.

Russian is Kyrgyzstan’s “official” language, giving it status on a par with Kyrgyz, the “state” language. Uzbek has no official status in Kyrgyzstan, and there are no longer any higher education programs offered in the Uzbek language.

Kyrgyz education officials and politicians try to frame the school conversion issue in benevolent terms. For example, Kerez Zhukeeva, a spokesperson for the Ministry of Education, described conversion as “a positive step because parents think about the future of their children.”

Abdimitalip Satybaldiyev, the head of the Ata-Meken Party in Osh, also supports switching Uzbek-language schools to Kyrgyz, but emphasizes that it should be voluntary. “If parents want to have a good future for their children, they must take their children from Uzbek schools so that they can get educated in Kyrgyz or Russian. This will help a new generation enter universities without problems and then work in various fields, including government,” he said.

In the Uzbek neighborhoods of Osh, school conversions seem to be deeply unpopular. Many say that arguments about government opportunities are hollow and that state posts are closed to Uzbeks, even if they speak fluent Kyrgyz. Some blame Kyrgyz nationalism, which has surged since the 2010 violence. And Kyrgyz have long dominated local government, even though ethnic Uzbeks comprise about 36.5 percent of the population of Kyrgyzstan’s south.

Tavakkalhan Kamilova, a teacher from Uzbek-language School No. 94 in the outskirts of Osh, says that few Uzbeks want their children to attend Kyrgyz schools and that many, regardless of ethnicity, are dreaming about leaving impoverished Kyrgyzstan. For that, an education in Russian is considered the best choice. “Uzbeks prefer to send their children to Russian-language schools,” said Kamilova. “But even Kyrgyz parents prefer that their children attend Russian-language schools so that in the future they can continue their education in Russia.”