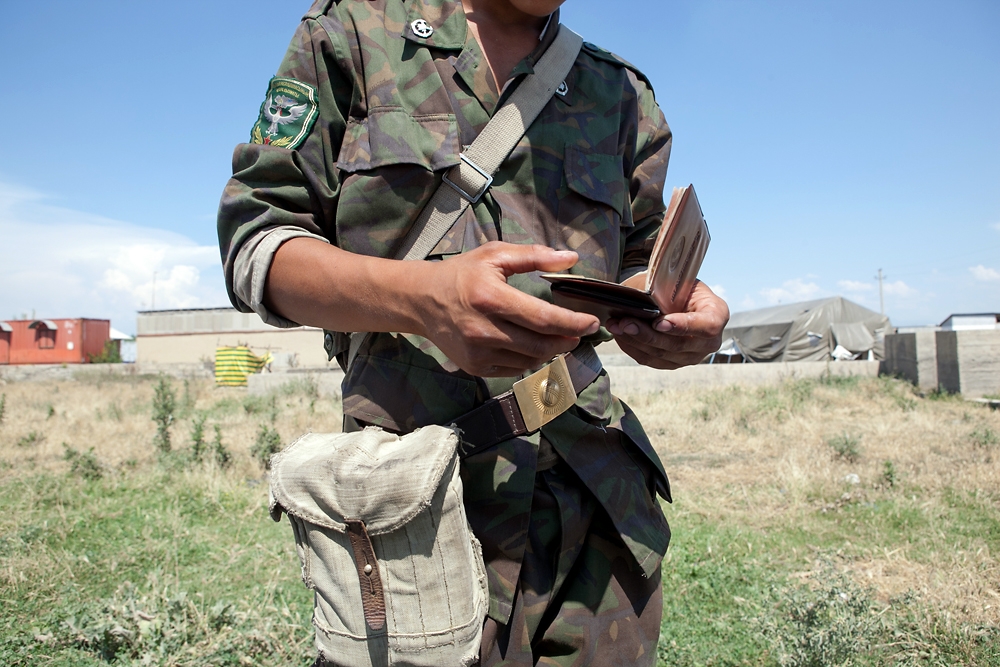 A Kyrgyz border guard checks passports at a roadblock near Osh in southwestern Kyrgyzstan shortly after the deadly ethnic violence in June 2010. In the first three years after the 2010 clashes, the number of 16-year-olds taking “Uzbek” as their ethnicity upon applying for a first passport fell steadily. (Photo: David Trilling)

It has been over four years since ethnic violence in Kyrgyzstan’s southern provinces caused widespread death and destruction, and the wounds are still raw. Members of the Uzbek community, which suffered disproportionately in the violence, complain about being treated like second-class citizens and many are adopting documents stating they are ethnically Kyrgyz in an attempt to keep career and social opportunities open.

Like Soviet documents before them, all Kyrgyzstani passports contain a line – now called the “sixth point” – marking the bearer’s ethnicity. By default throughout Central Asia children usually obtain their father’s ethnicity. But statistics show that in Kyrgyzstan, an increasing number of young people are choosing not to identify as Uzbek when they get their first passports at age 16. Some are also changing their names to sound more Kyrgyz.

“In 2010, when I turned 16, I decided to take the ethnicity of my mother, a Kyrgyz, as it is easier to live as a Kyrgyz here,” said Choro, a student in Kyrgyzstan’s capital. The passport office in Bishkek, he says, asked him not to indicate ongoing ethnic tensions when he wrote his formal request to adopt Kyrgyz as his ethnicity.

Two years later, Choro changed his family name because it was “too Uzbek” and, he says, he regularly faced intimidating or uncomfortable questions.

“When I registered for a driving class in Bishkek, the lady [at the driving school] looked at my passport and asked if I was a ‘real Kyrgyz’ or not.” She could not understand how a Kyrgyz person could have such an Uzbek-sounding name. Tired of the questions, and their chauvinistic undertones, he applied to change his name, a bureaucratic process that is legal, but time-consuming. “Now no one asks me any questions and I feel better,” Choro said.

Another student, Feruza (not her real name), took Kyrgyz as her ethnicity at age 16. But she says she still faces discrimination at her university. For example, other students opposed her attempt to run for class office. “Because you’re Uzbek,” one told her.

During the first three years after the 2010 violence, the number of 16-year-olds taking “Uzbek” as their ethnicity upon applying for a first passport fell steadily, from 29.77 percent of the total (2010) to 21.53 percent (2013), according to statistics provided by the State Registration Service.

In September 2010, shortly after the interethnic conflict, Topchubek Turgunaliev, then a presidential adviser on political affairs, suggested Kyrgyzstan eliminate the “sixth point” in national passports and instead indicate “Kyrgyzstani” – a term inclusive of all citizens, regardless of ethnicity.

But the “sixth point” remains in passports and so do the awkward interrogations. “You have an Uzbek name, so why does your passport indicate you are Kyrgyz?” a security officer at a large corporate office in Bishkek asked a EurasiaNet.org correspondent with an Uzbek-sounding name recently when she handed over her passport to enter the building.

Marat Kazakpaev, a professor of political science at the Kyrgyz-Russian Slavic University in Bishkek, explains that Uzbeks are changing their ethnicity to get ahead in the public sector, where titular ethnicity is an informal requirement. He argues that dropping the “sixth point” is “nonsense,” however: “Because every person belongs to a specific ethnicity.”

Article 38 of Kyrgyzstan’s Constitution says that everyone has the right to determine his or her own ethnic identity, and that no one can be forced to “determine and state” their ethnicity. But after the initial passport is issued at age 16, changing the “sixth point” is hard.

At age 22, after a grueling interrogation from Kyrgyz border guards who threatened him with drug and terrorism charges, an Uzbek living in Bishkek, Timur, tried to change the “sixth point” in his passport to read “no ethnicity.” The passport agency refused.