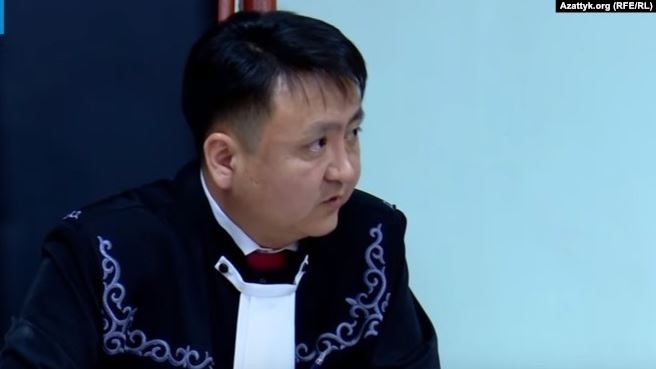 A judge in Kyrgyzstan who cleared a man accused of sexually assaulting a 13-year-old girl in 2016 is facing mounting calls for his dismissal.

The verdict was handed down by Judge Aibek Ernis uulu last year and was subsequently upheld on appeal, but the case has now regained public attention with a public petition calling for the case to be reviewed.

One lawmaker last week demanded that the Supreme Court, which is now poised to consider the matter, pursue the episode more thoroughly than Ernis uulu.

“I appeal to Aibek Ernis uulu, does he have any kind of conscience? The rapist destroyed the life of a child, and now so has he,” said Aisuluu Mamasheva, a member of the Ata-Meken party. “The case has now gone up to the Supreme Court. I ask that they consider this matter objectively. This should not be happening in our country.”

A petition calling for the judge’s dismissal has drawn more than 2,500 signatures.

The alleged assault is said to have occurred in 2016 before the girl was due to embark on a group trip to a summer camp on the Issyk-Kul lake. The accused attacker cornered the girl in the toilets of a cinema where the participants of the group had gathered and committed an act of sexual violence against her, the mother of the alleged victim said.

None of the names of the people involved have been made public.

This incident only came to light two years after the fact, when the mother noticed that her daughter was self-harming and had suicidal thoughts. But although the case was taken to court, the judge failed to give the accusation a proper hearing, the mother said.

“We demand a fair verdict. The criminal should be punished to the full extent of the law. My daughter was 13 when he committed this act of violence against her,” she said. “Instead of trying to discover what happened and issuing an objective and just verdict, Judge Aibek Ernis uulu set the rapist free. And I am supposed to pay some kind of fine. This is just lawlessness and an outrage. Nobody is listening to us.”

The accused man has denied his guilt.

The mother has appealed to the Council of Judges to consider sanctions against the judge and the Bishkek city court for what she described as procedural violations.

Ernis uulu is no stranger to charges of administering defective and suspect judgements. He is mostly known for his administration of highly politicized trials, such as the one that culminated with opposition politician Omurbek Tekebayev being sentenced to eight years in prison on bribery charges in 2017.

Tekebayev’s case was initiated after he mounted an energetic campaign to thwart efforts by then-President Almazbek Atambayev to effect amendments to the constitution.

In 2018, a group of prominent civic activists compiled a list of more than 20 judges assessed by them as being especially corrupt and guilty of passing unjust and unlawful verdicts. Ernis uulu was on the list.

Judicial reform has been described as a top priority for the administration of president Sooronbai Jeenbekov, who has said complaints about judges account for around 70 percent of the petitions he receives from the public. His pledges to take action and the waves of public clamor notwithstanding, however, the reform agenda has proven anemic.