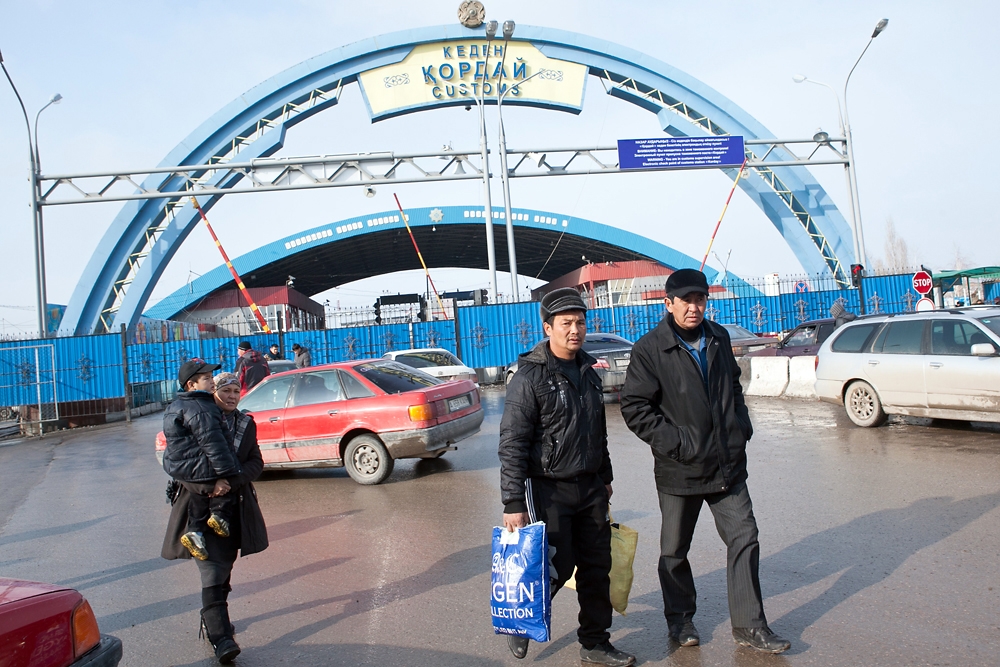 Kyrgyzstan is planning to join its northern neighbor Kazakhstan in a customs union that also includes Russia and Belarus. (Photo: David Trilling.)

Kyrgyzstan is moving decisively to join a Moscow-led trade body, but the process will take time as Bishkek seeks preferences that would protect its garment industry and legions of migrant laborers, says a top Kyrgyz official.

First Deputy Prime Minister Djoomart Otorbaev, whose portfolio focuses mostly on economic issues, spoke with EurasiaNet.org this week about the Customs Union, the troubled mining sector, and described how Bishkek plans to plug a financial hole after American troops depart next year.

The Customs Union of Belarus, Kazakhstan and Russia, which opened in 2010, is intended to be a single economic space somewhat analogous to the European Union. To critics, it is a means for Russian President Vladimir Putin, who has done little to hide his expansionist aspirations, to reestablish the Kremlin’s hegemony over the former Soviet empire. Yet Otorbaev says membership is natural because Kyrgyzstan’s principal markets are formerly Soviet republics.

Kyrgyzstan is in no blind hurry, however. “Now we are harmonizing legislation with Customs Union countries. In 2013 we will establish a roadmap and next year we will make very concrete practical steps [toward membership],” Otorbaev said, speaking in English. The decision is natural: excluding gold (which “everyone is ready to buy”), “all our exports are going to the countries of the Customs Union. [Membership] will make life easier for our businesses by cutting the costs of delivering what we produce here to our neighbors.”

But Otorbaev is also sanguine about the challenges. “It will definitely not only be positive,” he said, noting concerns especially among entrepreneurs in apparel and textile industries. The sector relies on cheap raw materials from neighboring China. The garments are assembled in Kyrgyzstan and exported, largely to Kazakhstan and Russia. Otorbaev estimates the industry is worth about $1 billion, a sixth of GDP.

It remains unclear how membership in the Customs Union would impact the sector; both Kyrgyzstan and China are World Trade Organization (WTO) members; Russia also recently become a member. Joining the Customs Union, some entrepreneurs fear, could stanch the flow of raw materials from China to Kyrgyzstan.

“There is a lot of work to be done,” Otorbaev added. “We have to harmonize more than 200 different pieces of legislation.”

Otorbaev feels membership benefits will outweigh any negative effects, such as inflation. “I don’t expect a price shock. We will see some increases, but also our farmers who are exporting their products to neighboring markets will benefit from the free trade. … At the moment, crossing the border [with Kazakhstan] is really difficult – there’s customs clearance, corruption, other obstacles. These definitely increase the transaction costs for our farmers and other producers exporting their products.”

Another reason Kyrgyzstan is so eager to join the Customs Union is its reliance on labor migration. The World Bank last year named Kyrgyzstan the third-most remittance-dependent country in the world, calculating that money sent back to Kyrgyzstan totaled the equivalent of 29 percent of GDP. But Otorbaev says not all transfers are from laborers. “Kyrgyzstan is the de facto trade hub for Central Asia. We have huge bazaars. Some of the transactions we receive from Kazakhstan and Russia are just profits and sales returns,” he said.

Otorbaev says job creation is one of his government’s top three priorities, but there is little authorities can do to stop the labor outflow – estimated between 500,000 and 1 million (out of Kyrgyzstan’s 5.5 million overall population). “It’s obvious that living next to oil-producing countries [Kazakhstan and Russia] our citizens will find a place where they can earn more [than at home in Kyrgyzstan].”

That gives Russia a lever to pressure Bishkek, and potentially other Central Asian states such as Tajikistan (the world’s most remittance-dependent nation, according to the World Bank), to join the Customs Union. “With time Russia will tighten migration rules,” Otorbaev said. Customs Union membership “will allow our citizens to work in Kazakhstan, Belarus and Russia without lengthy and very bureaucratic and sometimes corrupt obstacles.”

Kyrgyzstan’s natural resources are a potential source of jobs that could give migrants a reason to stay. But a protracted fight with the country’s largest investor, Toronto-listed Centerra Gold (which owns the country’s largest gold mine, Kumtor), has frightened investors. Otorbaev says he is forced to explain to “emotional” MPs that talk of nationalization is wrongheaded, and not honoring contracts does not help the country in the long term.

In mid-May, the government faced a setback when the tender for another large gold deposit, Jerooy, failed. Some officials, including Otorbaev, blame a government commission for setting the starting price at $300 million. Otorbaev says the deposit will be retendered at a lower price.

Another subject of widespread speculation with economic implications for Bishkek is the fate of the US-run Manas transit center outside of Bishkek. President Almazbek Atambayev has repeatedly said that American forces must clear out when the current lease expires in July 2014. But beyond the $60 million annual rent that Washington pays – about 3 percent of Bishkek’s budget – Kyrgyzstan stands to lose roughly $350 million in local contracts, airport fees and jet fuel purchases annually.

Atambayev has pushed for Manas to be converted for civilian use, which Otorbaev says is well on its way to becoming reality. The Americans are invited to participate, but not in uniform: “We want it to continue being a reliable logistics hub, but without a military component,” he said. That means no military aircraft and no soldiers, he stressed.

“We have to cover that gap,” he added, noting that the number of flights to international hubs like Istanbul have tripled (to three a day) in the past year. Lufthansa and Turkey’s MNG Kargo are looking at setting up freight hubs. “We want to compete with regional airports like Almaty, offering better services at lower costs.”

How? Cheap fuel. For the past year, a Kyrgyz-Russian joint venture has supplied the American base with a majority of its fuel. Gazpromneft-Aero is eager to sell to civilian clients, Otorbaev said. “We want to use this fact, this synergy to attract big players who can see the reliability of our services and our manageable costs.”