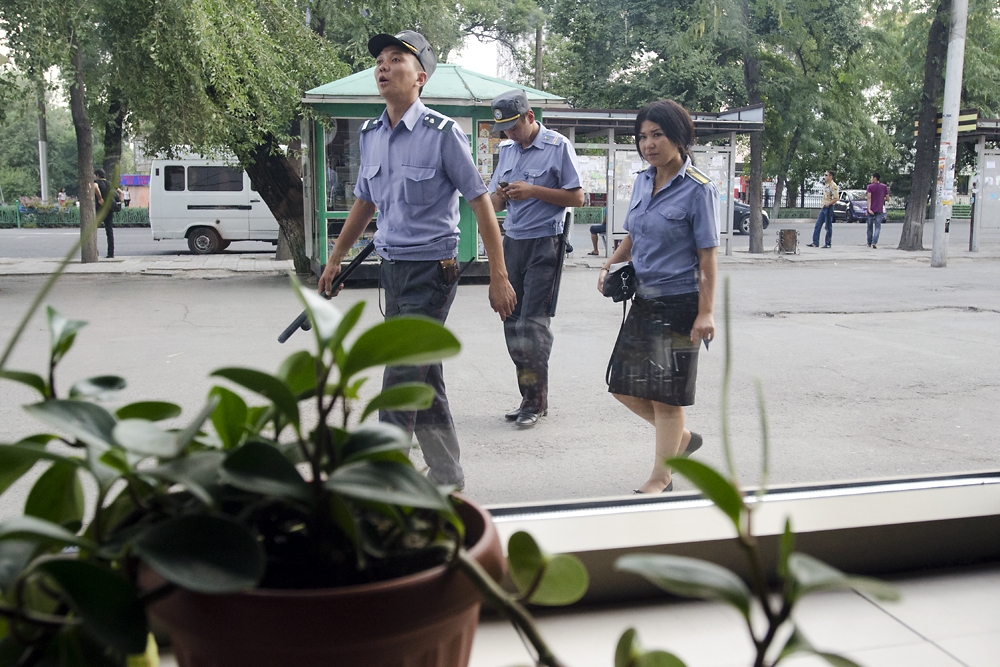 Kyrgyzstan’s sex workers accuse the police of shakedowns although prostitution has been legal since 1998. (Photo: Dean C.K. Cox)

Nights are quiet now on Pravda Street. Only a few older women are to be found in Bishkek’s notorious red-light district. They are the mamochki – elsewhere known as “madams,” female pimps. The girls are hidden away, often in taxis parked next to the road.

“There used to be hundreds of girls on the street, now they either hide in cars, or work secretly in saunas or apartments,” says Nailia, a 37-year-old mamochka with 20 years’ experience in the flesh trade.

The change occurred after Kyrgyzstan’s Interior Ministry established a vice squad last year, known formally as the Department for Combating Human Trafficking and Crimes against Public Morality. Authorities contend they are battling criminal networks, not prostitution, which Kyrgyzstan decriminalized in 1998. Yet human rights activists and public health workers say the stepped-up police efforts against sex workers and are making it harder to track sexually transmitted diseases (STDs) and ensure the girls’ safety. They want sex work out in the open where it can be better monitored.

The activists also wish to keep sex workers – whom they estimate to number 7,500 across Kyrgyzstan including 2,000 in Bishkek – out of the reach of Kyrgyzstan’s notoriously venal police as much as possible, concerned the police are more interested in lining their pockets than in matters of public health.

Since the vice squads started hitting the streets in November, sex workers complain that though they are not breaking the law, they are often rounded up and taken to police stations. There, police catalogue their fingerprints, along with photos and contact details; some are also forced to submit to STD tests. During a two-day police operation in December, for example, 70 women were detained, fingerprinted and tested.

“Each week we have several cases of girls going missing,” explained Salamat Adylov, the chief of Bishkek’s vice squad. “In 2013, it was 613 altogether [in Kyrgyzstan]. They are usually between 16 and 25 years old and many of them are sent to Turkey or the United Arab Emirates for prostitution or the organ trade. This database helps us identify the victims of human trafficking and murder.”

Though women have complained that police hold their passports until they submit to blood tests, Adylov insisted the testing is voluntary and referred to Kyrgyzstan’s criminal code, which says no one may deliberately infect someone with a disease. “Our nation’s health is one of our main goals,” he told EurasiaNet.org, claiming 70 percent of the women his squad has detained turned out to be a carrier of an STD, with roughly half found to have syphilis. Though he could not provide a percentage, he said some were HIV-positive. The United Nations Development Program has stated that in Kyrgyzstan, “the virus is spreading at one of the fastest rates in the world,” largely through intravenous drug use, but increasingly through unprotected sex.

But how effective are the police, one of Kyrgyzstan’s least-trusted institutions? With the increased raids, a shy, 24-year-old sex worker told EurasiaNet.org, the girls are losing a large proportion of their earnings to bribes. “It costs about 1,000 som [about $20] if you don’t want to go to the police station,” she said. That is about as much as she earns per client. Adylov said he is aware of the problem. He also claimed certain groups had impersonated police officers for the sole purpose of collecting bribes.

Beyond the evident corruption, the police approach is counterproductive, contended Shahnaz Islamova, the head of Tais Plus, a local non-governmental organization (NGO) that educates sex workers on how to protect themselves and about their legal rights. “Most of the sex workers are girls from very poor families. They leave their villages to find a job in Bishkek to support their families, or pay for university. They don’t plan on doing this their entire life. They hope to have another job and a husband in the future. They don’t want a record saying they were once sex workers,” said Islamova.

Tais Plus distributes free condoms as well as coupons for free, anonymous blood tests. Since 2007, the NGO has recruited pimps and mamochki as outreach workers. Nailia, the mamochka on Pravda Street is one of them and on the night a EurasiaNet.org correspondent talked to her, she was working for the NGO. “I know most the women here. We talk as friends and usually they understand the importance of disease prevention,” Nailia told EurasiaNet.org.

Tais Plus has its own statistics about STD rates that are less alarming than the ones the police distribute. The NGO says 20 percent of sex workers tested in 2013 had syphilis, a decline compared to the previous year, when the rate was 45 percent. Tais Plus adds that 2 percent of the women are HIV-positive.

Kyrgyzstan should encourage tests for sex workers and others engaging in risky behavior, not force them to test and stigmatize them with registration, said Islamova, who worries the powerful new vice squad is pushing the girls into the shadows.

“Sex work will never disappear no matter how much pressure the government applies,” Islamova said. “The workers will just go underground and therefore only disappear from our HIV-prevention programs.”