The footage has generated much online outrage. 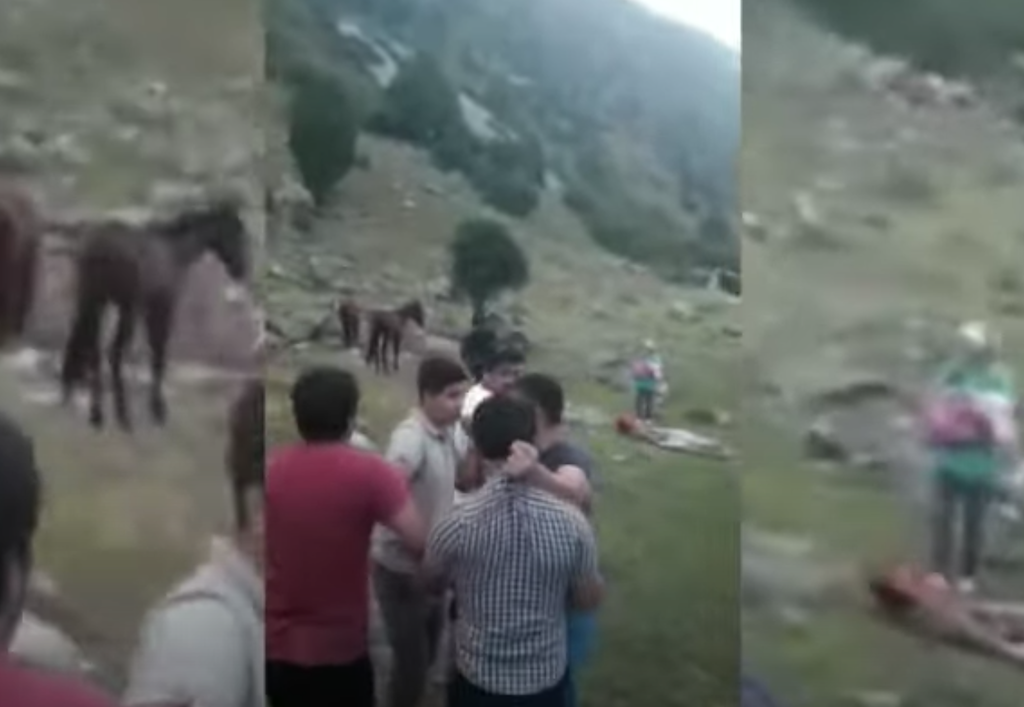 A screenshot of the footage showing the assault on the Pakistani students.

A pair of video clips circulating online are reawakening difficult conversations in Kyrgyzstan about the seemingly unshakeable scourge of xenophobia.

One, which surfaced last week, shows an assault on a pair of Pakistani medical volunteers by a group of Kyrgyz men. Another was self-filmed by a group of Kyrgyz expatriates in Russia, who warn in the footage they will beat up any Kyrgyz women who date men of other ethnicities.

These episodes have sparked a furious reaction online among commenters expressing dismay over a kind of recurrent hostility to foreigners felt to be threatening the country’s social fabric and reputation for hospitality.

The assault on the Pakistani men, who are studying for medical degrees in Kyrgyzstan, occurred outside a resort complex near the village of Koi-Tash, just outside Bishkek. To begin with, one attacker warned the victims that they should leave the country.

“We asked him to calm down and leave us alone. But after some time, he came back, and not alone, but with five or six other guys,” one of the students, Shah Abbas Ali, told Kaktus website in an interview.

The assault left Abbas Ali with abrasions and a broken nose.

What has particularly aggrieved the public is that Abbas Ali had shortly before the incident volunteered at a drop-in center in Bishkek, to help the teetering healthcare system cope with the intensifying burden of the coronavirus emergency.

Before the furor over that attack had died down, another video appeared online showing a gang of Kyrgyz men in Russia warning women to avoid starting relationships with foreign men.

“We do all kinds of jobs and we have many ethnic groups working with us – Uzbeks, Kyrgyz, all kinds. In these places, we invariably find Kyrgyz women. And we say to them, once, twice: If you do not obey, we will kick your ass,” the man in the video says. “We have gathered here because we are burning with pain for our Kyrgyz women. They go to nightclubs with other ethnicities, laughing the whole time.”

The men were later tracked down and questioned by representatives of the Kyrgyz Interior Ministry based in Russia.

In a subsequent direct-to-video statement circulated by the police, one of the men in the original video apologizes, albeit only very half-heartedly, for his words and warns fellow Kyrgyz men to refrain from whipping up trouble. He does not appear to specifically disavow his previous sentiments, though.

At least 800,000 Kyrgyz nationals are officially registered as working and living in Russia. In contrast with Uzbek and Tajik communities, that expatriate population includes large numbers of women, a fact that has occasionally given rise to tensions among chauvinist Kyrgyz men.

In 2012, for example, a self-styled patriotic group posted videos online in which women were seen being mocked and physically assaulted, and even tortured, for the perceived offense of being seen socializing with non-Kyrgyz males. Another wave of similar videos was posted online in 2015 and 2016, in which the women were insulted for their relations with Azerbaijani and Uzbek men.

The criticism also extends to women inside Kyrgyzstan deemed to have offended public morals for their relations with foreign men. In another high-profile case in 2017, also captured on camera, a young woman was punched in the face while out shopping at a bazaar in Bishkek with a male Afghan companion, who was threatened and told to “get out of Kyrgyzstan.”

Students from India and Pakistan, many of whom pursue medical studies in Kyrgyzstan, meanwhile, say they are regularly targeted for xenophobic attacks – not for dating Kyrgyz women, which they rarely do, but just for being foreigners.

According to RFE/RL’s Kyrgyz service, Radio Azattyk, there are about 8,700 Pakistanis and 9,000 Indians studying in Bishkek alone. There are also smaller contingents of Pakistani and Indian expats in other regions, like Osh, Jalal-Abad and Issyk-Kul.