Kyrgyzstan: Vodka is no Elixir for Budget Woes 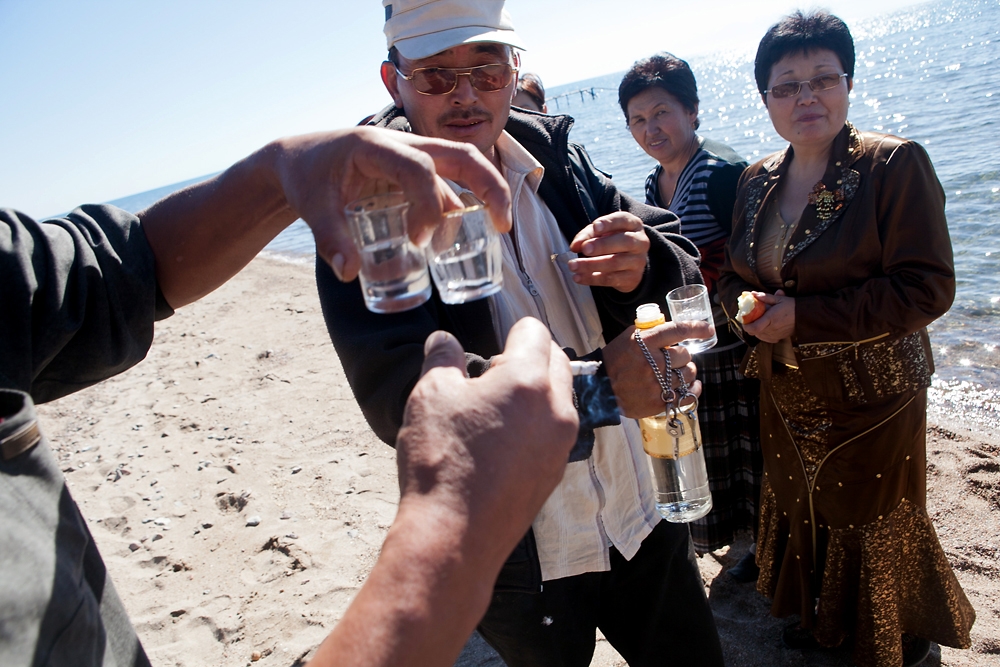 Kyrgyzstan’s collective thirst for vodka should provide a nice revenue stream for a government budget consistently starving for funds. But instead of reaping benefits from an excise tax, the state is mostly feeling high and dry.

Vodka is already a major employer – at least 2,000 people work in the bottling plant of Ayu, the local market leader. But trade in fake excise stamps is said to be flourishing, meaning the government is missing out on much-needed revenue. According to the Economics Ministry, the sector contributed just $7.5 million in taxes last year. Officials estimate that 72 percent of Kyrgyz vodka is distilled in the shadows and goes untaxed.

The heartbeat of local vodka is undoubtedly Ayu, producers of Shpilka (Stiletto), a brand enjoying moderately successful sales in the United States. Local media outlets portray the firm’s ultimate beneficiary, MP Sharshenbek Abdykerimov, as a kind of Kyrgyz Rockefeller, capable, as the local newspaper De Facto wrote last year, of “finding a common language with any government” to protect and expand his business interests.

De Facto’s assessment may have some truth to it. In February last year, a state-anti corruption squad reportedly found 100,000 bottles of vodka bearing fake excise stamps in an Ayu warehouse. But charges have since been quietly dropped, according to a government source. Contacted by telephone, Ayu representatives refused to speak with a EurasiaNet.org correspondent about the charges.

Critics say Ayu is developing a monopoly that is bad for both consumers and government revenues. Ayu, along with another company described as an affiliate by Kyrgyz media, Kyrgyz Alko Trade, account for roughly 80 percent of domestically produced vodka sales, says The Association of Alcohol Producers, a lobby group.

Tursunbek Kurenkeyev helped found the association in 2009 to counter Ayu’s growing domination of the domestic market. He says gray-market alcohol production predominates across the sector, as corrupt officials are easily bought off to look the other way.

Despite Russian “concerns,” Ayu’s Shpilka line is slowly gaining a reputation as a premium vodka in the United States, where it retails for around $25 a fifth. Harvey Wagar, a Louisiana-born lawyer and a minor stakeholder in importer Phenix Brands, claims Shpilka regularly beats other better-known premium vodkas such as Grey Goose, which is French, in blind taste tests. “One of the most important components in vodka is water. Kyrgyzstan has some very high-quality water,” Wagar explained.

Although Wagar could not provide precise numbers for Shpilka sales in the United States, he said the nature of the US vodka market – “mostly cocktails” – forces Ayu to focus on marketing as well as taste. The Shpilka bottle features a long-limbed heroine wearing a red dress and red stilettos. Recently, St. Louis-based rapper Chingy began pushing Shpilka. He’s said he is planning a performance in Kyrgyzstan. “It’s dangerously smooth – it’s almost as smooth as me,” said Chingy of Shpilka in a December interview with St. Louis Magazine.

Back home, Ayu’s main competitor relies on simpler advertising gimmicks. Alsuu, which produces Syemkhoz, a vodka featuring a cartoon lamb on its label, has a lottery that awards a whole sheep for winners to enjoy with their vodka.

Such gimmicky advertising campaigns don’t seem to be slowing Ayu’s momentum in cementing its position as the country’s dominant vodka producer.

At the beginning of this year, six of nine domestic producers lost their licenses when they failed to meet the minimum 100,000-decaliter annual requirement introduced in 2009 for vodka producers. Some media have accused the family of the former president, Kurmanbek Bakiyev, of having a hand in the legislation, and of colluding with major producers to drive smaller rivals out of business.

Pressure was “much worse in the Bakiyev period,” recalls Mirlan Sadykov, director of Alsuu. Sadykov accuses his competitors of having “state inspectors check on other businesses and paying newspapers to write dirty articles about other vodka companies” prior to the riots that ushered out the Bakiyev family in 2010.

The vodka wars are not entirely over, says Kurenkeyev of The Association of Alcohol Producers, noting that producers of other liquors do not face any minimum production requirements. The sector is still defined by a “small group of men playing cat and mouse,” he told EurasiaNet.org. “The losers are the state and the market.”