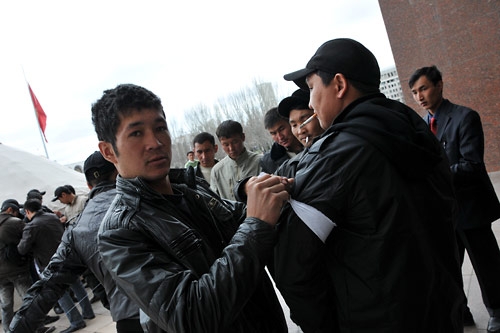 Donning white armbands torn from old bed sheets, roughly a dozen men were signing up for the units outside the National Security Service (SNB) headquarters in central Bishkek on the afternoon of April 8.

One young man who declined to be identified said he was signing up because "tonight maybe there will be a second war." A fight for control over the Bishkek department of the Ministry of Internal Affairs was reported late on the afternoon of April 8.

But 25-year-old Adil, who spoke on condition that his last name not be revealed, offered a more restrained assessment. Citing the previous evening's looting, he said that community organizations are "necessary because people live here in Bishkek and we should protect our houses and businesses."

"We are just people who live in Bishkek and have no relations with [estranged President Kurmanbek] Bakiyev and just want peace here."

The volunteers are organized by neighborhood. Information on where to sign up is being spread by the local news agency AKIpress and by word of mouth.

"Our friends called and said that we should protect our own houses and businesses. We're just simple citizens; we want to stop the marauding," one volunteer said.

In Ala-Too Square, the scene of heavy fighting on April 7, organizers erected a yurt to draw volunteers. Near a pool of blood left from yesterday's violence, they sat at a desk looted from the nearby White House.

"It is our duty as the youth and future of Kyrgyzstan to protect our country," said one organizer, who asked to remain anonymous.

Kumat, who called himself a deputy organizer, said that within 30 minutes he had signed up over 40 volunteers and more were joining rapidly. "The tying of the ribbon is an act of solidarity and brotherhood," he said, referring to two men affixing white strips of cloth to each other's arms.

Another organizer said that 1,000 volunteers have signed up around Bishkek. They will patrol in groups this evening, carrying phone numbers for sympathetic armed national security officers stationed throughout the city.

"We have no guns; we have phones," Adil said. Asked where the regular police are currently, he said, "Nobody knows."

The Ministry of Internal Affairs could not be reached for comment.

Dalton Bennett is a freelance photojournalist based in Bishkek.