On top of the exhausting work, stresses are compounded by having to reject heartbreaking requests. 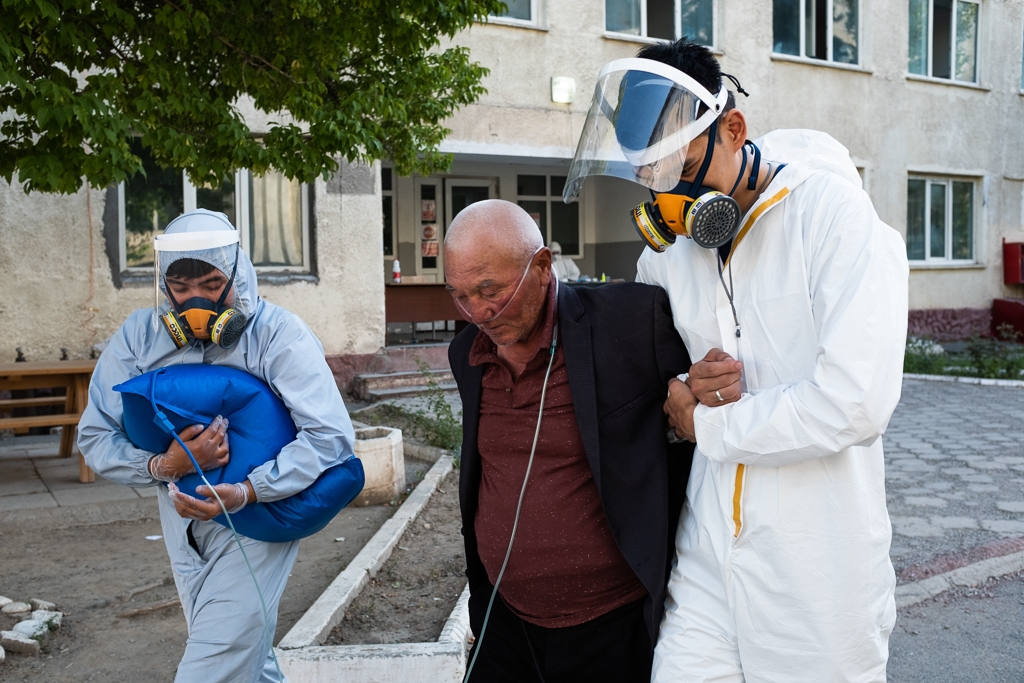 Volunteers Nurlis Madimkulov and Almanbet Yrysaliev give oxygen from a pillow to an elderly man whose blood oxygen saturation decreased and had been refused admission to a hospital.

Earlier this month, football player and entrepreneur Aidana Otorbayeva took to Facebook to offer a helping hand to the doctors on the front line of Kyrgyzstan’s battle with coronavirus.

“I am not a doctor,” she wrote. “But! I am ready to volunteer. To help medical personnel, run errands for them, take them food … to at least somehow ease their work.”

She then appealed to the public to do their bit too.

Her volunteer group, called Soobsha, now has around 35 members daily assisting doctors, making deliveries of medical materials, providing food, and manning drop-in health centers. In some cases, they are even transporting patients to hospital or delivering medicine to the homes of sick people.

“When I wrote the post, I did not expect such a response on Facebook and Instagram. The first to get in touch were friends and acquaintances. And then people I didn't even know,” Otorbayeva told Eurasianet. “On average, the volunteers are working every day for five-six hours. Some guys are working from morning till night.”

The surge of volunteerism arrived after the alarm was raised by Yegor Borisov, head of the intensive care unit at Bishkek’s Emergency Medicine Center, who wrote on Twitter about the challenges facing health personnel.

“The pressure is still very intense. The number of patients in serious condition is growing. We cannot help everybody,” he wrote. “Crews are working very hard, some people are fainting from exhaustion and the heat of the protective gear.” 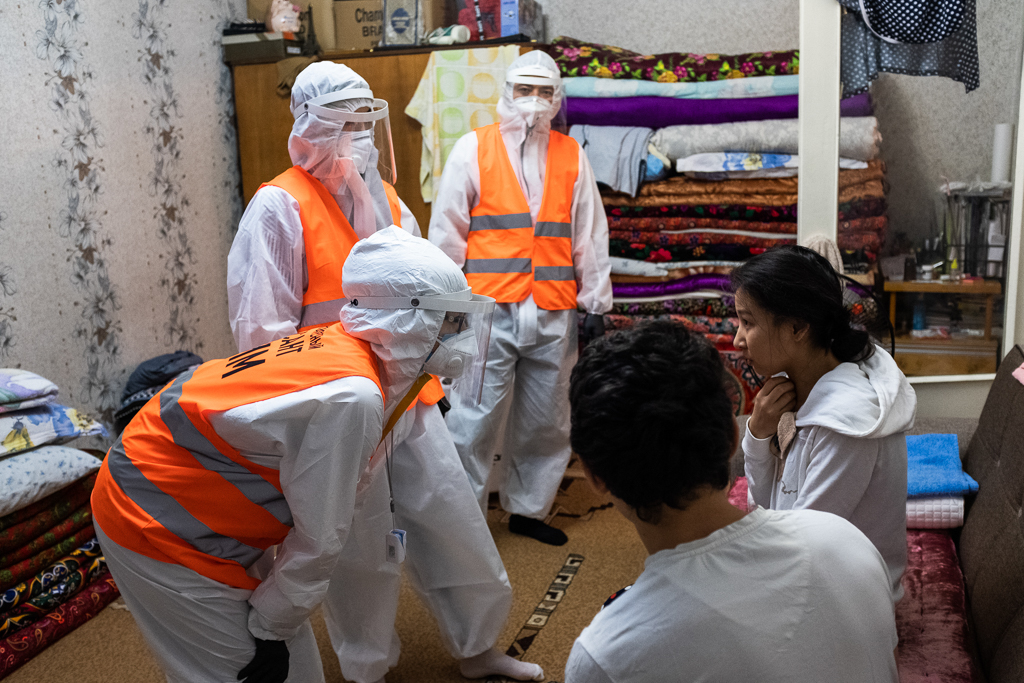 As of July 17, 2,199 health workers have been infected with the coronavirus. At least five have died. The government has promised to pay compensation worth 200,000 som ($2,500) to any medic who contracts COVID-19, but only a few dozen have actually been given the payment.

Many medics are also succumbing to what is being diagnosed as pneumonia, which would have made them ineligible for compensation. There have been lingering suspicions that the pneumonia cases are, in fact, COVID-19 that has not been properly identified.

The government radically changed tack on July 17, however, merging pneumonia cases into its overall COVID-19 tally, thereby taking the total number of detected coronavirus infections to 23,000 and the death toll to 785.

Otorbayeva said she receives messages and calls daily from businesspeople wanting to help financially. She directs those offers of assistance to under-resourced hospitals, but she warns that people need to know that they should be in it for the long haul.

“In a couple of weeks, we might run out of people wanting to help, because everybody will burn out. I tell businesspeople: ‘Come in a week or two, we’ll need that help then too, do not do everything at once,’” she said.

A lot of help has come from the anonymous curator of the restaurant review Instagram account food_navigation_kg, who has spearheaded the operation of providing free hot meals for medics. By clubbing together with chefs and restaurants, she managed to deliver almost 1,000 meals over the space of one week.

“Doctors say that they are not getting food from the state. Not enough to keep up their immunity, so we are supplying them with extra meals. The priority is health workers monitoring the sick, those in red zones, staff running drop-in centers and doctors who came from the regions and Russia to help,” she told Eurasianet.

A group called the Bishkek Initiative Youth Center is taking help directly to the sick, bringing them oxygen concentrators, a device that supplies pure oxygen and thereby assists the process of breathing. The team has taken their 12 machines, bought with donations, to more than 500 people.

“We get all kinds of situations. Sometimes we are literally pumping oxygen into people to keep them alive until a space frees up in the critical care unit,” Sofia-Aidana Murzayeva, one of the team members, told Eurasianet. “We have volunteer drivers taking us from place to place. We’re about 35-40 people, but the core team is 10 people.”

Prime Minister Kubatbek Boronov said on July 2 that the government had taken delivery of 500 oxygen concentrators and was buying another 500. But here too the voluntary sector is helping bolster numbers.

When pop singer Anjelika Kairatovna set up a fundraising initiative, she managed to drum up $85,000 in donations that were then used to buy 200 oxygen concentrators, as well as PPE and medicines, which hospitals also have in short supply. Other local celebrities have followed with their own fundraising.

It may be too early to know yet just what emotional and physical toll the voluntary work will take on people.

At least one volunteer, 21-year-old medical student Adinai Murzabekova, has died. Murzabekova died on July 14 – it is believed with coronavirus, although this is still subject of uncertainty – after finishing a shift at a pop-up hospital in Bishkek.

Murzayeva works sometimes for 20 hours in a day. On top of the work, her stresses are compounded by having to regularly reject heartbreaking requests. Murzayeva said, for example, that some people have asked her to sell one of her team’s oxygen concentrators, but that she has to refuse. And many people just don’t make it.

“We often see death. There are cases when the machine doesn’t help and you cannot save the person. I had one case when I knew from the outset that the woman would die. My job was just to keep her alive for another two hours, so that her relatives could arrive and say their farewells. The woman died in my arms. Her last gaze was at me,” she recalled. “Every death is a terrible blow. I cry often, it takes a toll on the spirit.”