It can take four days to get to the front of the line at this bitterly cold pass almost two miles high. 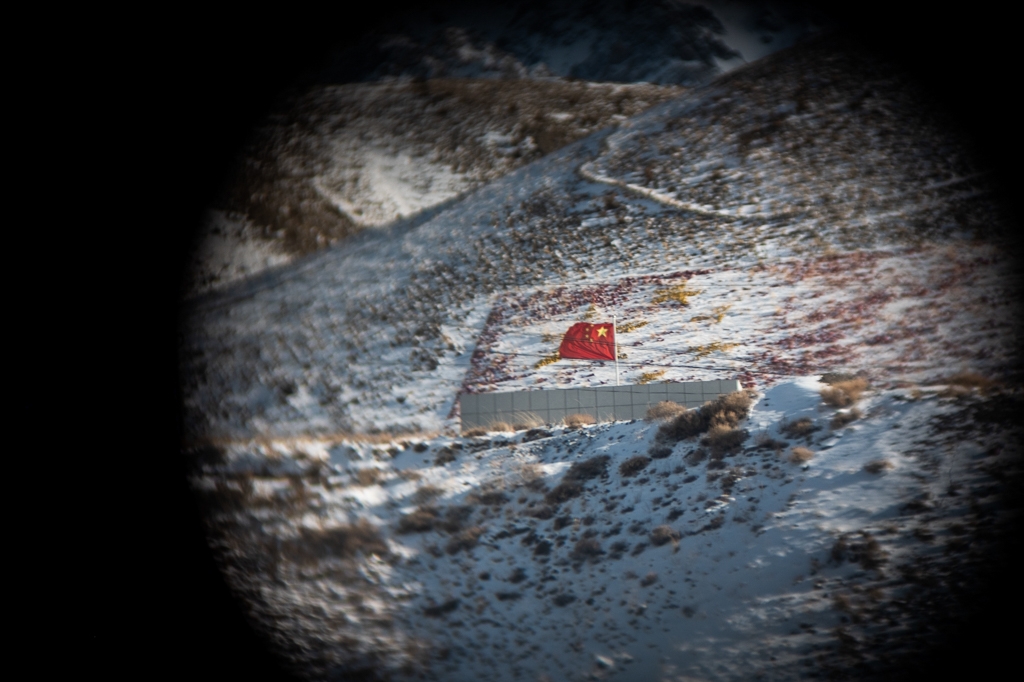 This is as close as most Kyrgyz can get to China. (all photos by Danil Usmanov)

The drive from Osh up to Irkeshtam, at southern Kyrgyzstan’s high-altitude border with western China, began early in the early morning. It was December and freezing.

We got stuck for a while at Taldyk Pass. Road workers were out sprinkling sand and clearing snow. By lucky chance, Prime Minister Artyom Novikov happened to be visiting around that time.

“It’s only because Novikov that they’re doing this. Usually, nobody clears it. They only do it when the road gets blocked,” my driver complained. 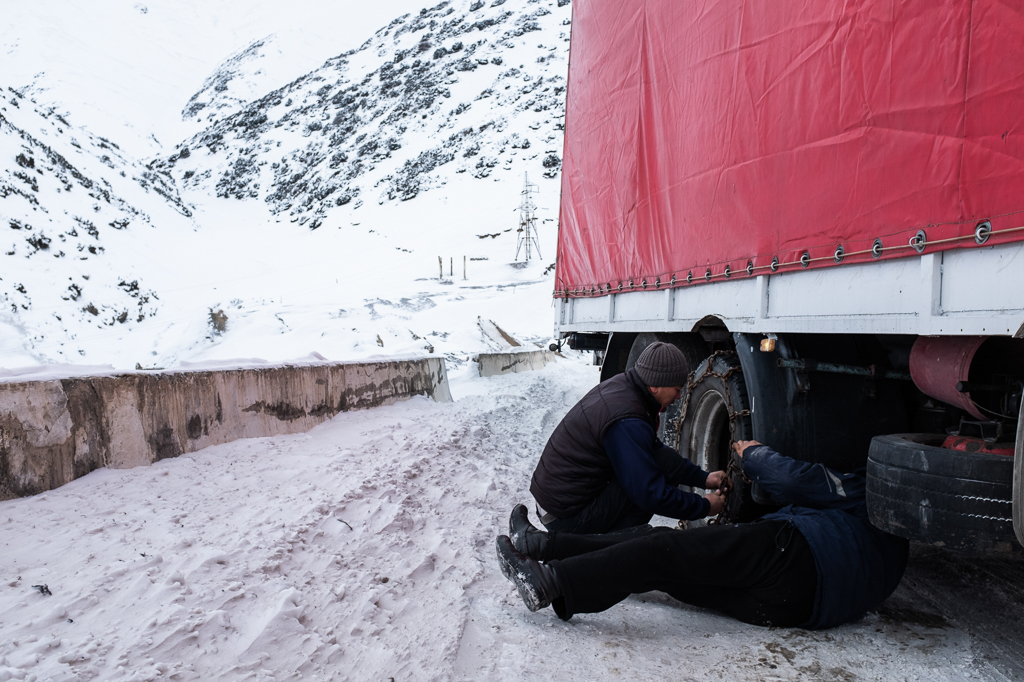 At Irkeshtam, I was met by border guards manning the Andrei Bestsenny frontier post – named after a Red Army soldier killed fighting Basmachi insurgents in 1931. 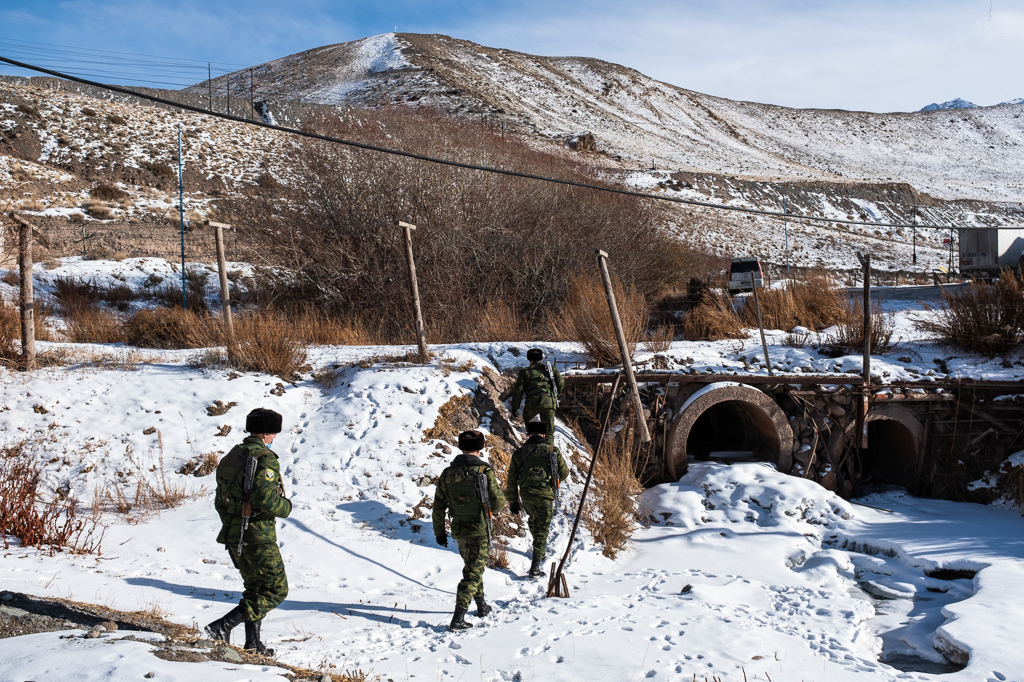 There was no going across to the Chinese side, but even from here I could make out the hangar they had built to disinfect the trucks arriving from Kyrgyzstan.

The drivers are required to scrupulously wash their trucks before crossing. Anybody found with a vehicle not meeting the standards of Chinese border personnel is turned back.

Coronavirus messed everything up.

“There used to be a line going all the way back to Nura, about 150 vehicles, around 50-60 vehicles were allowed through daily,” said one driver called Timur, referring to a village down the road from the Irkeshtam crossing.

Then the lockdowns came. Passage eased up after April-May, but then got bad again.

“After the reopening, they let through 20-30 trucks a day. Now it is seven or eight tops,” Timur said.

A representative from a trading company was more resigned.

“What are you going to do? They dictate the terms. We depend on them,” she said while dealing with Kyrgyz customs officials. 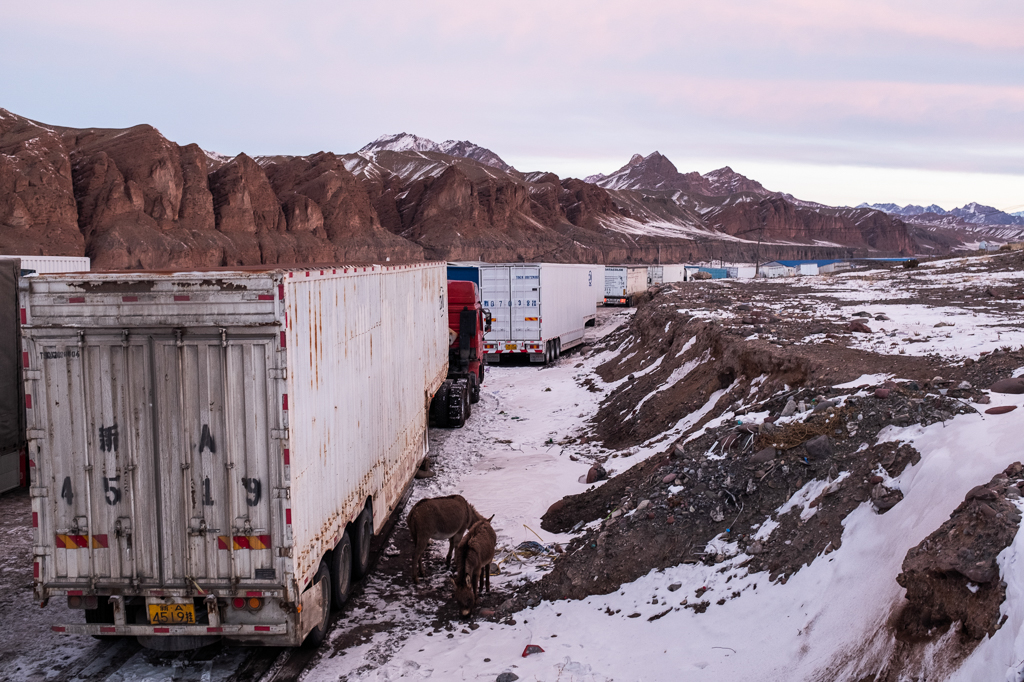 The border procedures have become far more complicated. Initially after the lockdowns, it took Chinese officials 20 minutes to send a vehicle through. Now, between disinfection procedures and the collection of samples for analysis, it is more like 90 minutes.

For that whole time, drivers are blocked inside their trucks. Many take a plastic bottle with them in case they need to go to the bathroom.

It’s all about waiting. It can take up to four days to get to the front of the line.

There’s not much to do. Some stroll. Others repair and clean their trucks. Sleeping is another pastime. Time drags unmercifully. 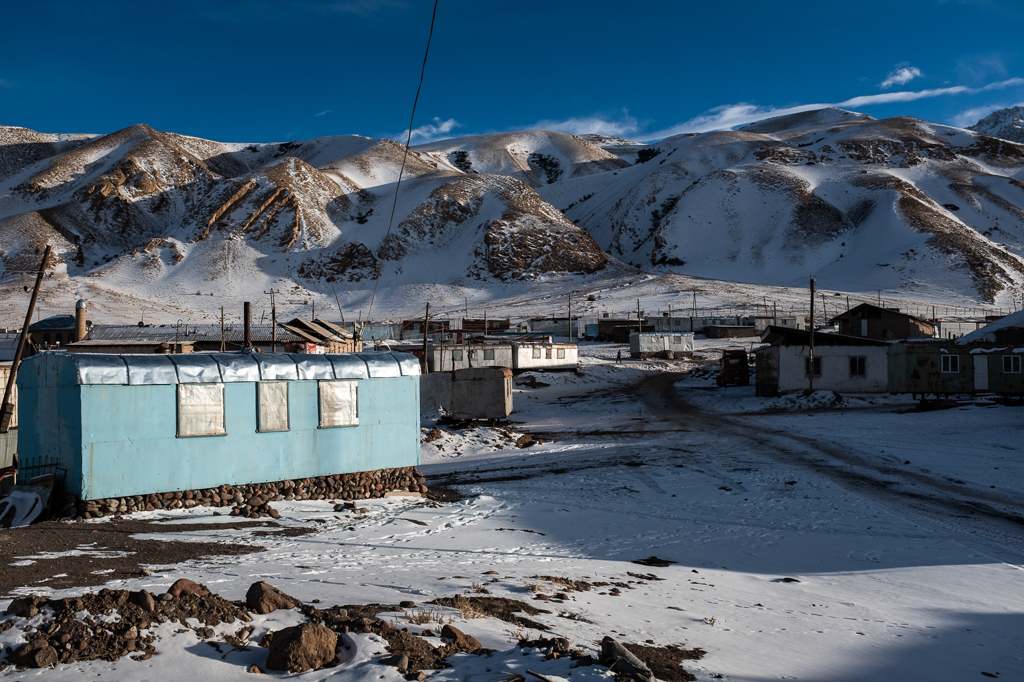 A small settlement of repurposed railway cars serves the needs of the expectant community of truckers. There’s fewer of them these days, though. In busier times, there were about 100 cars, now there are only a couple dozen.

The checkpoint closes for the night. If you pop into one of the railway car cafés for dinner, the chances are good a communal drinking bout will be in session. A shot of heavy spirits here is not the standard 50 grams. It’s a whole 100 grams. More efficient that way. 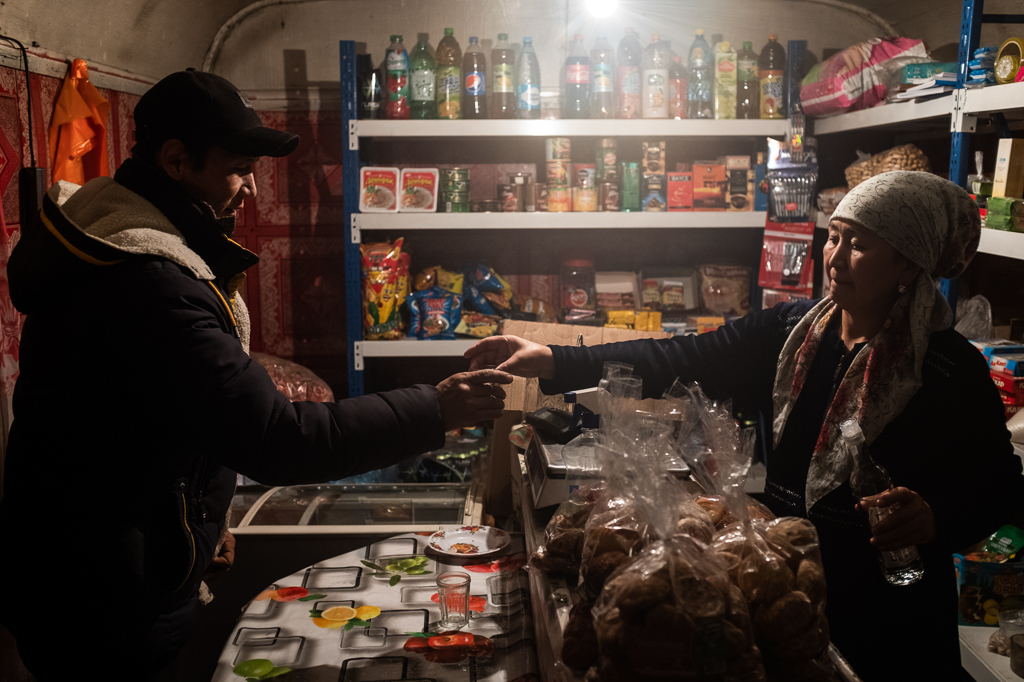 You soon learn to distinguish who’s arrived recently. They look clean and fresh. Veterans are tired and smeared with oil and caked with dirt from the fumes. 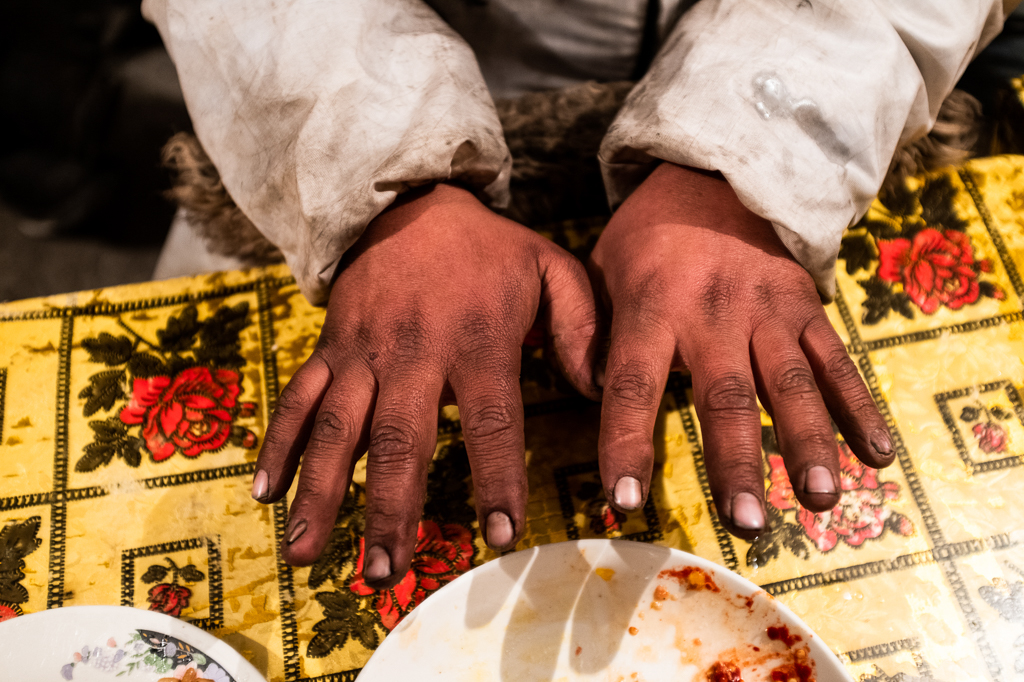 “A driver’s life is a dog’s life,” said Kadrali Topchubayev. “You leave the house and roam like a dog. Sometimes, when you return home after you’ve been away for too long, your little one looks at you funny.”

Once the boozing session is over, drivers disperse for their trucks. Some stay at the hotel. 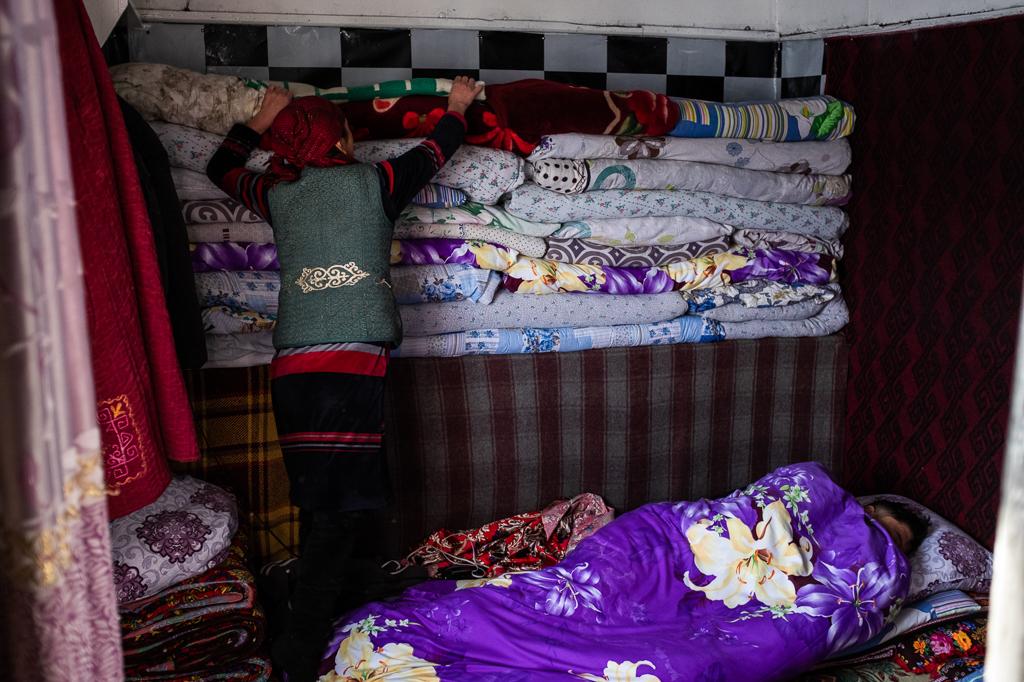 At seven in the morning, they wake and fire up their vehicles. The whole encampment is a rumble of engines and a fug of exhaust gases. 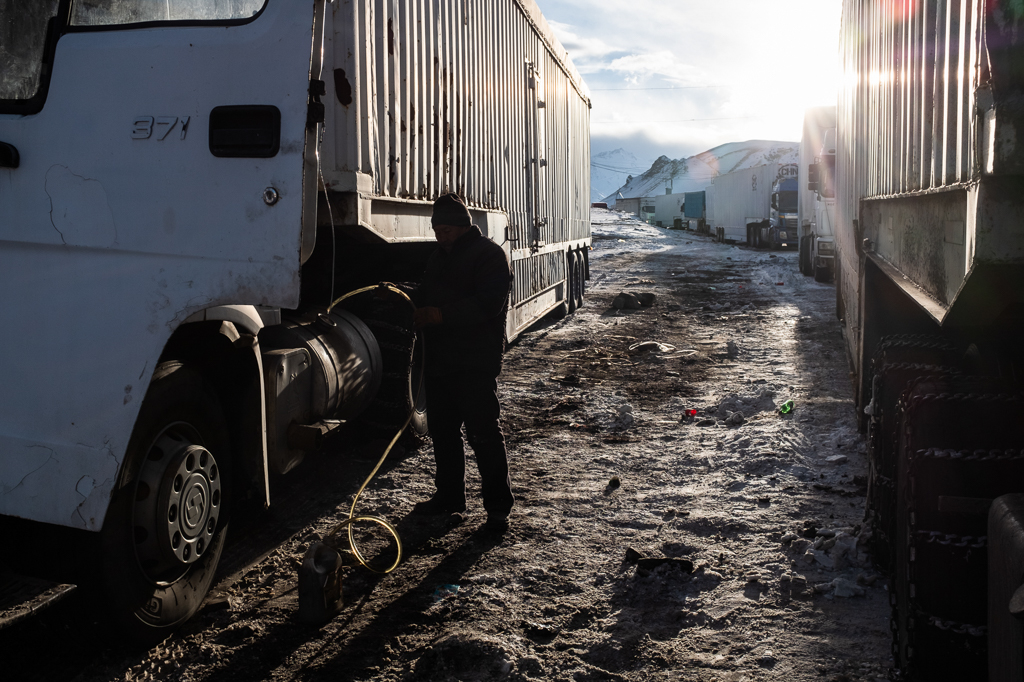 The line inches forward toward China. Some make it across. Those who don’t head back to the café for breakfast. Nursing hangovers is a common daybreak activity. More drinking is one way of doing it. 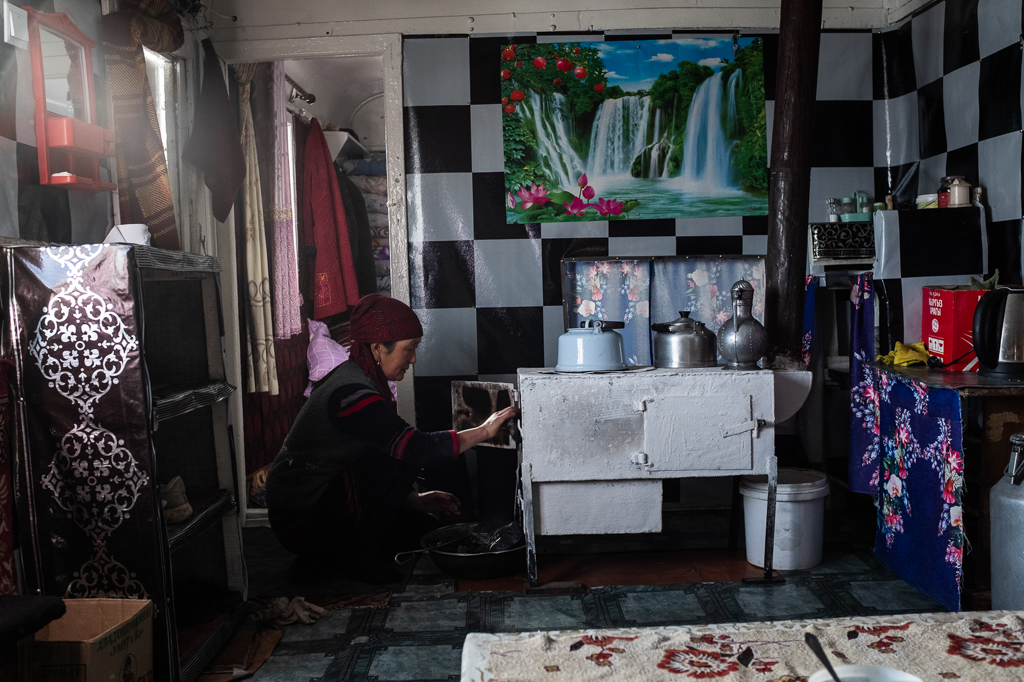 The lucky ones who get across leave their driving partners back in Kyrgyzstan. Truckers often travel in pairs in case of emergency. 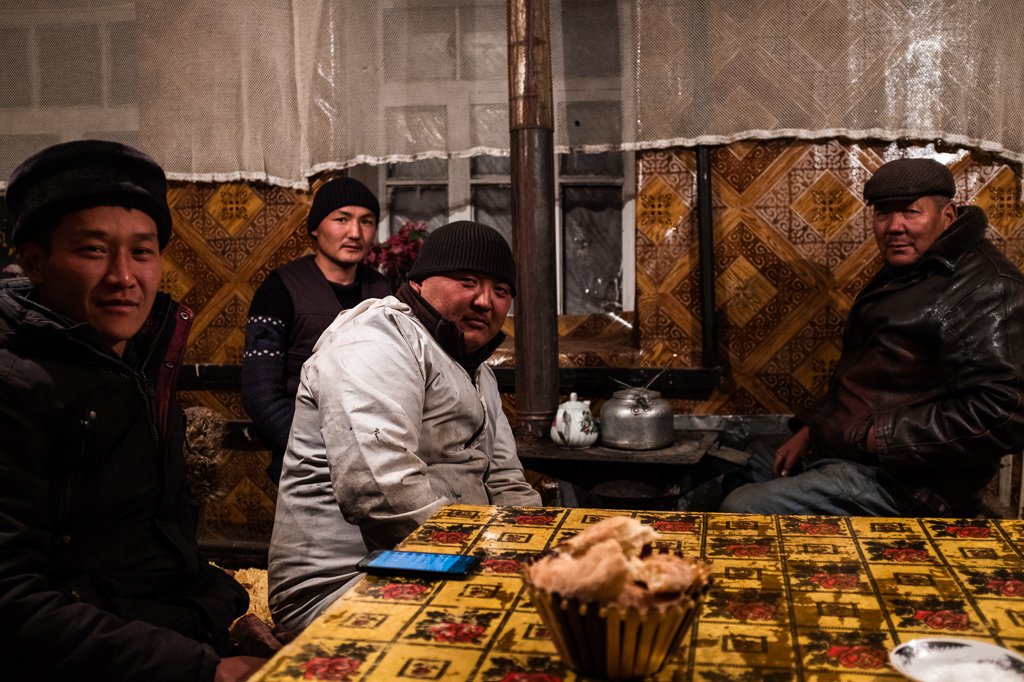 On the Chinese side, once the disinfection procedures are through, the container is unhitched. Leaving Kyrgyzstan it is usually empty. A full container of Chinese goods is then attached. And the trip back begins. The drivers do not go into China proper.

After I was at the camp a few days, one driver lost his patience waiting and decided to head back down from the mountains, so I hitched a ride.

On the way, the fuel in the cabin’s autonomous interior heater froze solid. Within 10 minutes, the cold had become unbearable. A car stopped to help out, so I decided to join them for the ride to Osh.