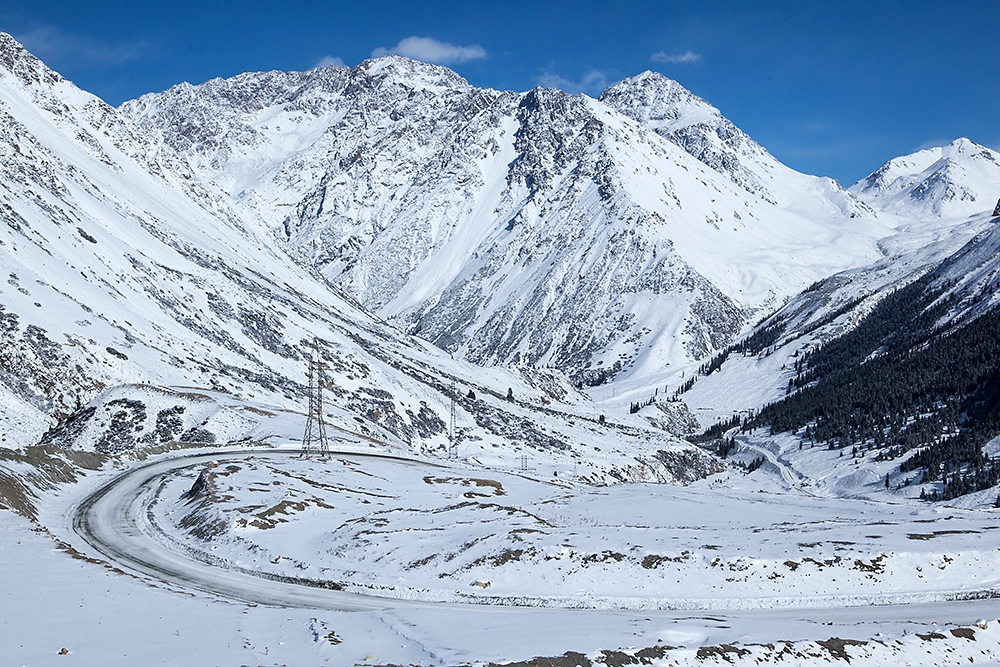 Mountains surrounding a pass in Kyrgyzstan’s eastern Issyk-Kul Province are buried under snow in February 2013. Officials fear that global warming, responsible for warmer winters, could lead to more unpredictable avalanches and increase risks for those living and working near Kyrgyzstan’s mountains, which cover around 90 percent of the country’s territory. (Photo: David Trilling)

Vyacheslav Miroshkin’s childhood in Kyrgyzstan three decades ago was characterized by long, cold winters. “You could pour a few buckets of water on the ground and you would have an ice rink for the whole season. In recent times we have not had many like that,” said Miroshkin, head of Heli-Ski on Tien Shan, a mountain sports company based in Bishkek.

This winter has been especially warm. Environmental experts in the Central Asian country are convinced that warmer winters increase risks for those living and working near Kyrgyzstan’s mountains, which cover around 90 percent of the country’s territory.

Avalanches have always been a problem in spring, but the warmer winters – a product, many scientists believe, of climate change – are making disasters harder to predict. And following the fall of the Soviet Union, Kyrgyzstan no longer has the monitoring or emergency resources to deal with the dangers. While Bishkek has signed numerous documents acknowledging climate change and its consequences, a lack of financing and political will has left officials struggling to respond to the threats.

Last year, avalanches and mudslides killed eight people, according to the Ministry of Emergency Situations (MES). So far this year, four locals and a Russian tourist have died. In neighboring Tajikistan, the season has been even worse, with a single avalanche claiming six lives in February in the country’s Pamir region. Further south, Afghanistan has had its worst season in recent memory, recording over 200 deaths so far, according to a count by the Australian Associated Press.

Tajikistan and Kyrgyzstan, along with Albania, were the regional countries listed as most susceptible to climate change by a 2009 World Bank study. Four of the five Central Asian states were also found to be least able to adapt to the potential effects of climate change.

The tail end of winter – Kyrgyzstan’s ski season officially finished in mid-March – is an especially dangerous time. Avalanches happen “when a sharp warming follows a cold period,” Muhammad Svarov, head of the Center for Crisis Situations at the MES, told EurasiaNet.org. Global warming has compounded “the problems inherent to an extreme continental climate.”

Miroshkin, the mountain sports guide, believes the official and actual death tolls from avalanches may differ. In the years since independence, Kyrgyzstan’s majestic peaks have tempted more risk-takers. That includes tourists like 30-year-old Muscovite Vera Kusakova, who was reportedly killed by an avalanche on February 26. Shepherds routinely disregard weakly enforced environmental statutes in order to forage for wood and food in specially designated national parks and they are also at risk.

It is the latter group whose deaths are less likely to be reported.

“There was an instance a few years ago when six or seven boys were buried by snow while foraging in a protected area. The villagers covered it up because they did not want the government to know they were doing it,” said Miroshkin.

Avalanches and landslides not only threaten human lives. In Tajikistan and Kyrgyzstan, average economic losses from natural disasters total up to 1.5 percent of GDP annually, according to a 2012 report by the United Nations Environmental Program.

Shamil Ilyasov, deputy director of the National Climate Change Center, a non-profit that advises the Kyrgyz government on sustainable development, says authorities have been unable to compile research that might mitigate the economic damage. “Our government agencies are not always interested in systematized data gathering,” Ilyasov told EurasiaNet.org. He asserted that he has evidence of “corrupt schemes” in government records, under which compensation payments were misdirected.

“People who live up mountains and in steep valleys close to rivers, the poorest part of the population” are most vulnerable, he added. But instead, it is often “someone’s relative” in a less affected area that receives the lion’s share of government compensation.

The Ministry of Emergency Situations (MES) claims it has improved its preventative activities in recent years. The MES sends out regular SMS messages to the country’s mobile phone users, says Svarov, and it tries to prevent disasters by artificially triggering avalanches with artillery rounds to reduce tension on mountain passes.

While these snow shootings are “cool to watch,” the MES remains under-funded and under-qualified in how it responds to natural disasters, Miroshkin argued. “During the Soviet era we had a big emergency rescue team. Now there are only a couple of guys stationed on the bridge on the Bishkek-Osh road,” which winds for 12 hours over two passes above 10,000 feet.