A lot of goodwill, but not much else for the time being. 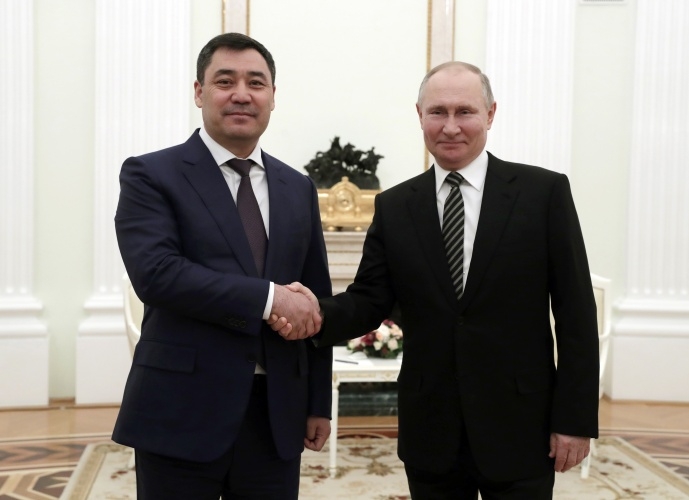 In accordance with a now-established custom, Kyrgyzstan’s president performed his first foreign visit by going to Russia and paying tribute to President Vladimir Putin.

The trip produced little of substance beyond mutual commitments of goodwill. That was important enough in and of itself, however, since Sadyr Japarov’s credentials with Moscow have to date not looked wholly solid.

Japarov took along the entire government when he flew to Moscow on February 24.

Finance and Economy Minister Ulukbek Karymshakov oversaw one firm bit of business – the signing of an agreement to receive 623 million rubles ($8.3 million) in aid from Russia to assist in creating a system of goods labelling that should cut down on smuggling.

The most symbolically important business occurred during two-way talks between Japarov and Putin. The Russian leader congratulated his Kyrgyz counterpart on winning the January 10 elections. Those polls took place just a handful of months after Japarov had used the streets to unseat former President Sooronbai Jeenbekov, whom Putin in 2019 thanked in person for ensuring there was a “calm, stable environment in Kyrgyzstan that makes it possible to resolve social and economic problems.”

Putin was unable to resist obliquely referencing the political turmoil that brought Japarov to power.

“We very much hope that you will be able to normalize the internal political situation,” he said.

While Japarov has ridden to high office on his nationalist firebrand credentials, this does not mean he has gone down the route of anti-Russian chauvinism. Quite the opposite.

Putin went so far as to thank his Kyrgyz partner for preserving the official status of Russian in Kyrgyzstan, observing that it was a matter of “extreme importance” for Russia. He then pledged to provide more opportunities for prospective migrant laborers from Kyrgyzstan to study Russian.

“This is important for the citizens of Kyrgyzstan, since it gives certain advantages in the labor market in Russia,” Putin said.

Around 600,000 Kyrgyz nationals are estimated to live and work in Russia.

Japarov doubled down on this issue in an interview to Russian state daily Rossiyskaya Gazeta. He told the newspaper that his government was devoting “great attention” to perpetuating knowledge of Russian in his country and that plans are in place to bring Russian teachers to teach in provincial cities in Kyrgyzstan.

Talk also turned to the help Moscow could offer Bishkek in combating the COVID-19 pandemic. Speaking to RIA-Novosti news agency, Japarov said import procedures for Russian-made vaccines had been eased – specifically by scrapping certification requirements for an interim period.

Bishkek is still at early stages of its vaccination program, however.

“The algorithm for the distribution of the incoming vaccines has been prepared and warehouses have been primed to take receipt of them. Preparatory work has begun on training healthcare workers how to store, handle and deploy the COVID-19 vaccines,” he said.

Japarov told Rossiyskaya Gazeta that he had asked Putin to give particular consideration to Kyrgyz migrant laborers in the vaccination programs or to allow then to be vaccinated on a payment basis.

The Kyrgyz leader’s intent was to make as good an impression as possible. He was stewing in a prison cell on kidnapping charges less than five months ago, something that Russian newspapers have not been shy to point out.

“Undoubtedly, my first foreign visit as president of the Kyrgyz Republic to you demonstrates the high level of bilateral relations between our countries,” Japarov told Putin.

He also presented Putin with a handcrafted sword as a token of his appreciation.

Not that friendship with Moscow is any guarantee of job safety. At his 2011 inauguration, former President Almazbek Atambayev spoke fulsomely about Russia as a “strategic partner.” He is now in jail. Jeenbekov likewise in 2019 called Russia a “long-term strategic partner,” only to be ousted from power the year after.

Still, pledges of friendship and support are far from built on nothing.

Kyrgyzstan has been getting sizable chunks of Russian assistance even since Japarov has been in charge. In February, Russia allocated $5.2 million to the Kyrgyz Interior Ministry for its anti-narcotics operations. Two months earlier, Moscow gave Bishkek $20 million in budget support funds. Over the past 15 or so years, Russia has forgiven Kyrgyzstan around $700 million in debts.

Trading volumes remained robust in 2020, notwithstanding the pandemic. According to preliminary figures, bilateral trade turnover amounted to $1.5 billion. That is 92 percent of what it was in 2019 – a relatively modest dip all things considered. The vast majority of that total, however, is taken up by Russian exports, which came in at $1.3 billion.

With Russian courting duties out of the way, Japarov will be turning his attention to other diplomatic ties.

Indeed, even before going to Moscow, Japarov got on the phone with Chinese leader Xi Jinping on February 22 for a general chat about bilateral relations. After also congratulating the Kyrgyz leader on his election win, Xi invited him to visit China.

Japarov’s most immediate follow-up trip, though, will be to Kazakhstan. That visit is scheduled for March 2-3.

Another neighbor, Uzbekistan, will reportedly be rolling out the red carpet for Japarov later in the month.

Note: This article was updated with news that Japarov is scheduled to make his second foreign visit to Kazakhstan. A previous version, published before that news was made public, stated only that he was due to travel to Uzbekistan.