Thousands of election posters and billboards have cropped up across Kyrgyzstan ahead of the October 4 vote for parliament. Photographer Alimjan Jorobaev documents the curious dissonance between electioneering optimism and real life. 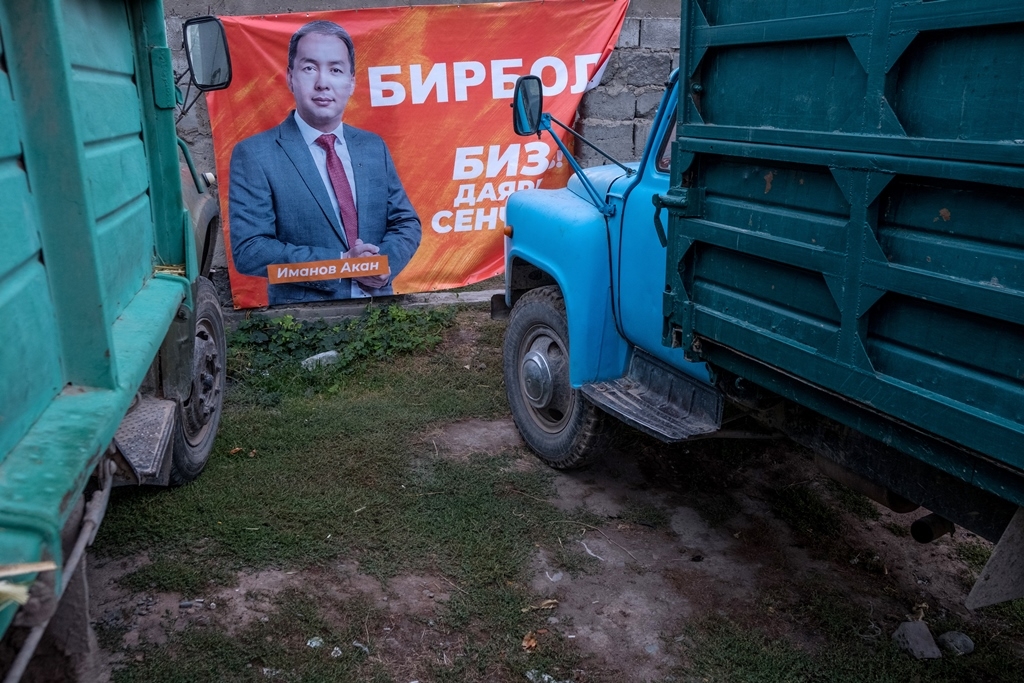 Bir Bol is one of the smaller parties currently represented in parliament. Their pitch here is: “We’re Ready. Are You?”

The idea to do this series came to me when I saw the faces of the candidates on campaign posters against the backdrop of our city, Bishkek.

They all felt too glossy and optimistic for this place we live in.

What seemed interesting to me was not just to photograph where the billboards stood, but to somehow represent the scene around it.

To show the dirt, the squalor and the poverty. That is, after all, the reality of this place.

With time, I decided to extend my range, to go further afield from Bishkek and explore rural areas. What I found there was more of the same. There was little difference, as it turned out, between the city and country villages. 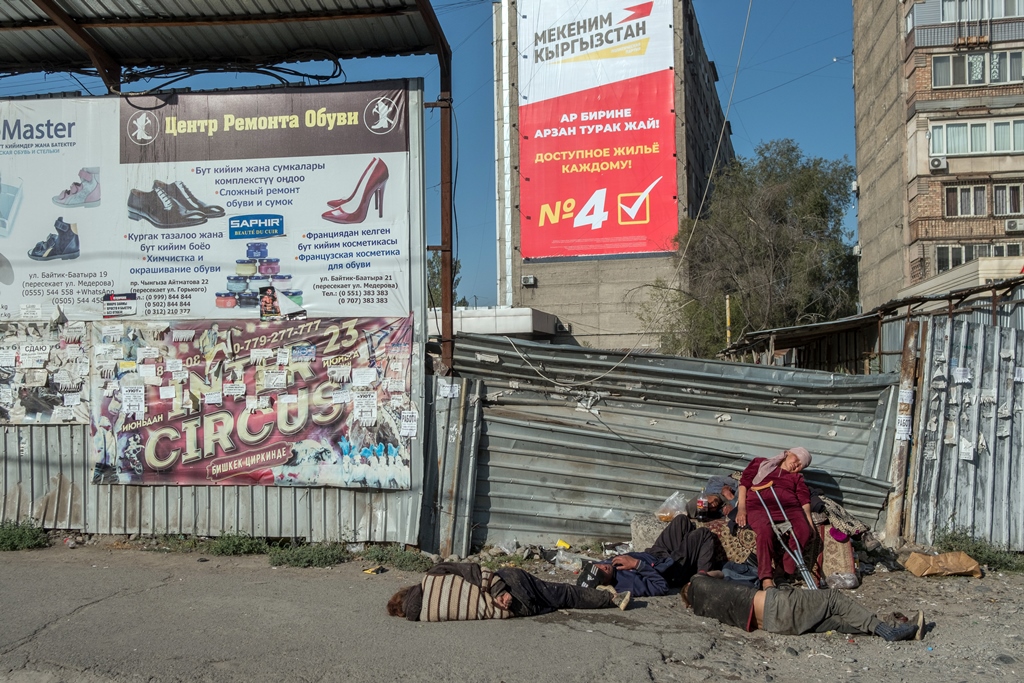 This giant poster for the Mekenim Kyrgyzstan party, which is expected to be one of the strongest performers in the election, hangs on the side of an apartment block in the center of Bishkek. The slogan reads “Affordable Housing for Everybody.” The homeless people seen here are lounging by a building site near some fast-food restaurants, where they often panhandle for change from passers-by. 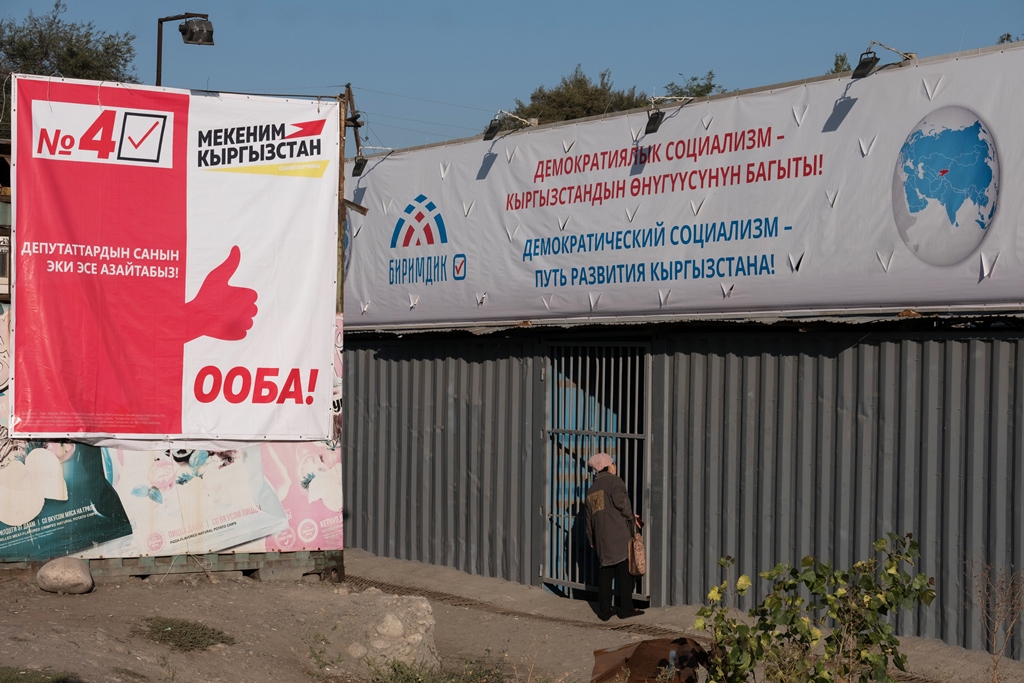 There are two posters here, on the grounds of a bazaar. One for Mekenim Kyrgyzstan, left, carrying the simple slogan Ooba! (Yes). The other is for another likely frontrunner, Birimdik. Their slogan is “Democratic Socialism – the Path to Development in Kyrgyzstan.” 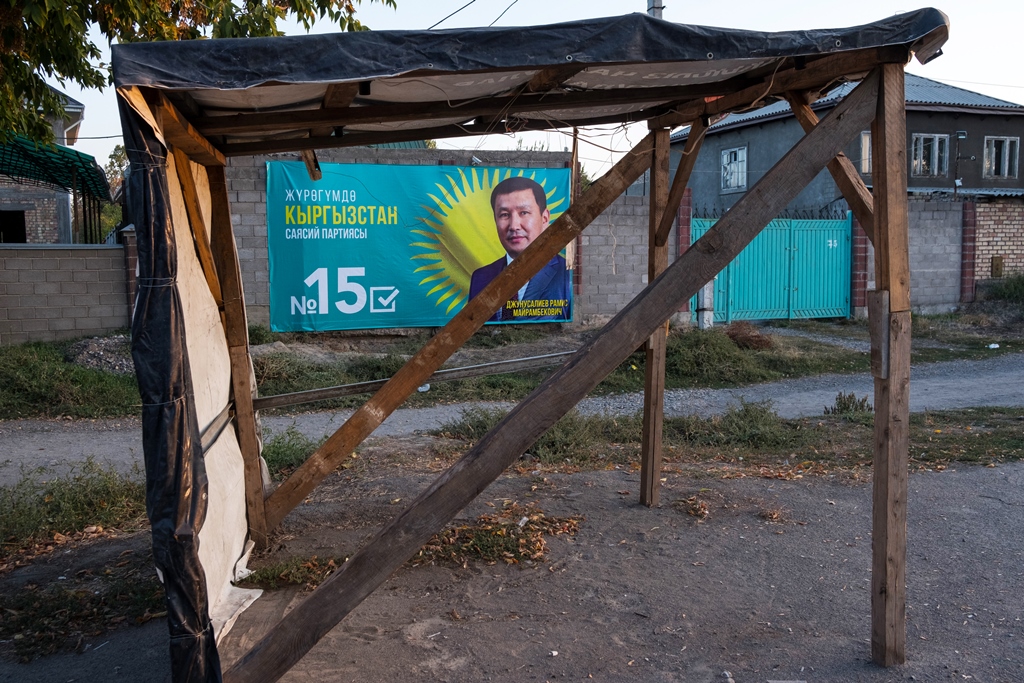 The Kyrgyzstan Party is a bland, business-powered collective that is a loyal member of the outgoing ruling coalition. Their name is basically their message. The poster reads “Kyrgyzstan is in my heart.” It is unclear if they mean just Kyrgyzstan the party, or the whole country. 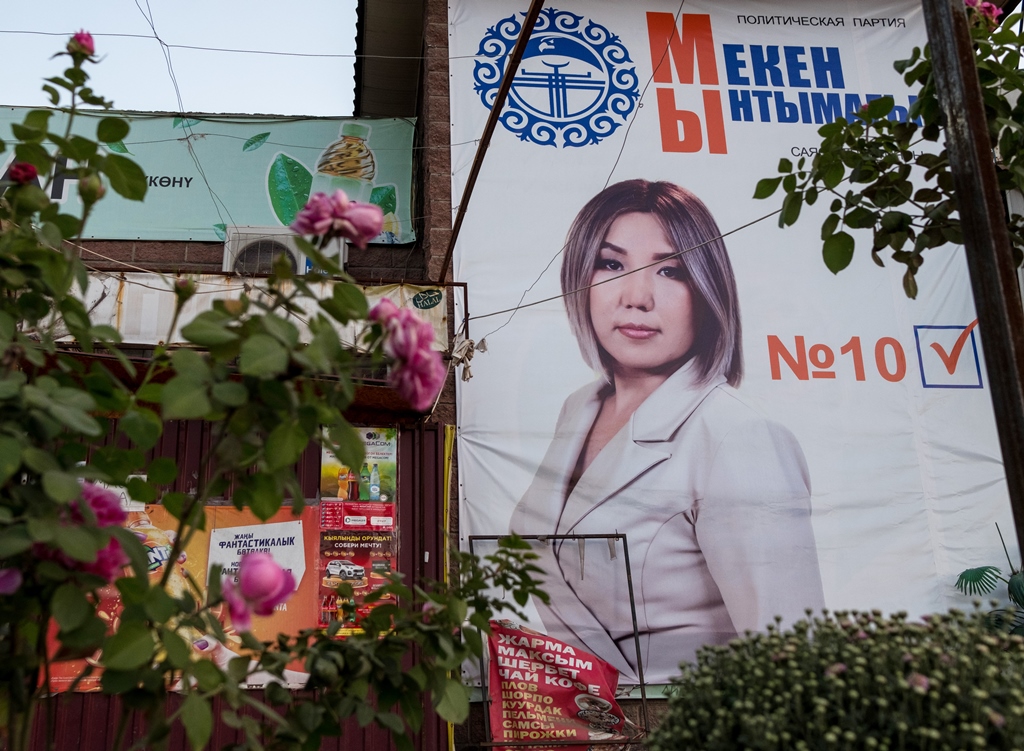 Meken Yntymagy is one of the smaller parties on the ballot. It was set up in 2010 by a veteran of the Soviet war in Afghanistan. Their campaign has focused on the importance of stability for the country’s economic development. The poster is jostling for room with a smaller one advertising popular local drinks and food. 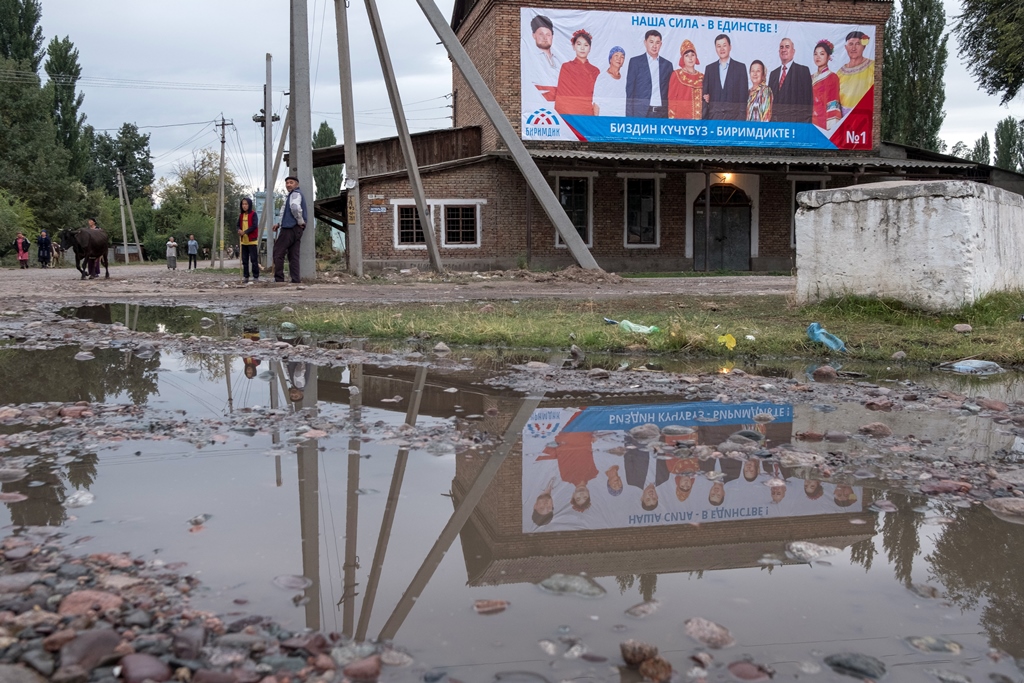 Birimdik again. In this poster they declaim that “Our Strength Is in Our Unity.” The party is closely linked to President Sooronbai Jeenbekov and is evidently positioning itself to become the party of government. 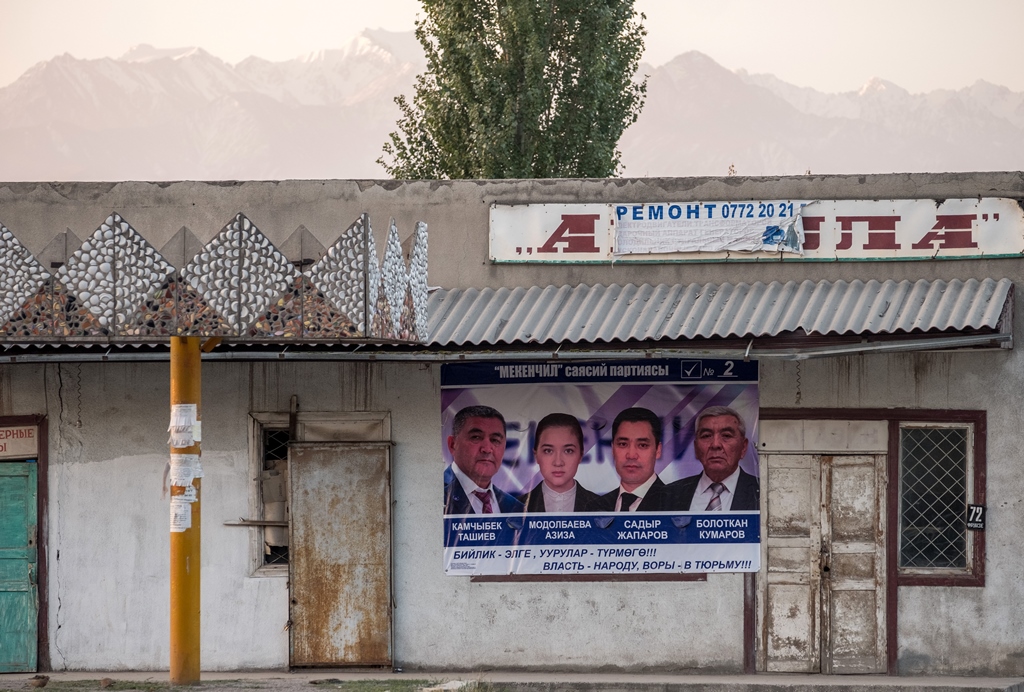 Mekenchil is another smaller party. It’s chances of getting into parliament are slim, although its party features some well-known faces, like nationalist firebrand Kamchibek Tashiyev, seen on the far left in this photo. The slogan at the bottom of the poster reads “Power to the People. Thieves Should be in Prison.” Another person on the poster, Sadyr Japarov, second from right, actually is in prison. A court in Bishkek in 2017 sentenced him to 11-and-a-half years in relation to the kidnapping of a regional governor in 2013. 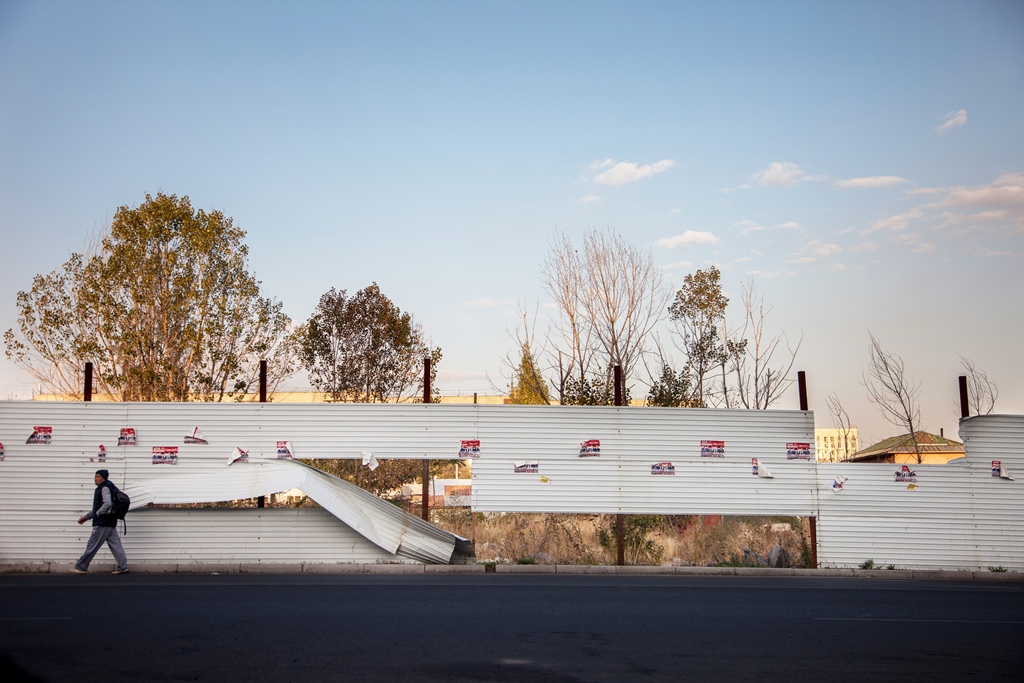 Leaflets are affixed on any available space. These are hoardings around a building site. 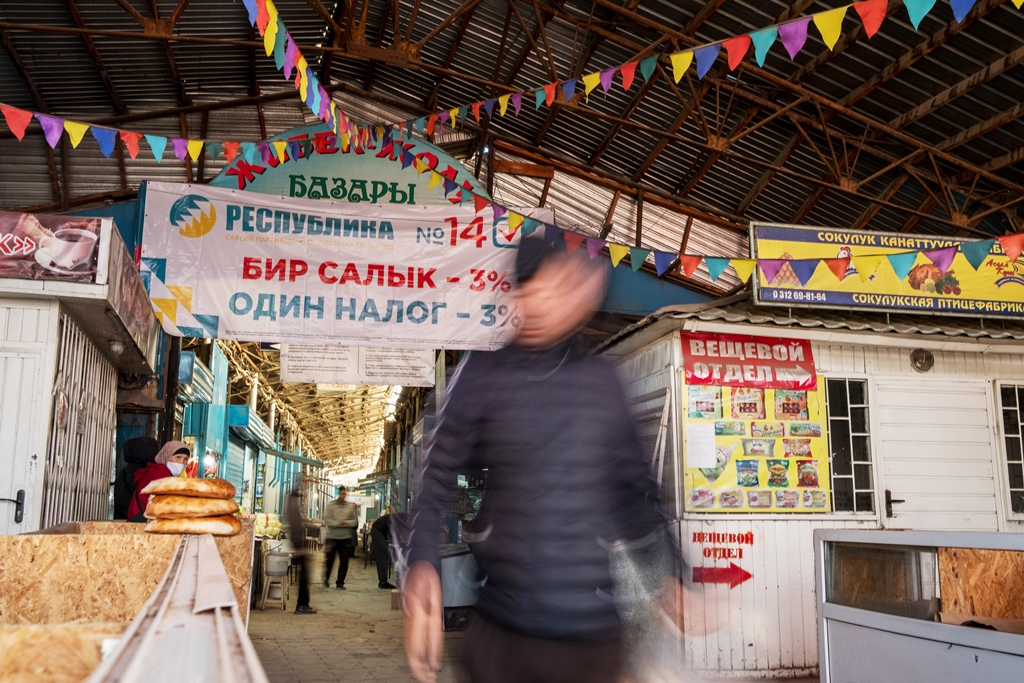 This poster for the Respublika party, which is bankrolled by multimillionaire businessman Omurbek Babanov, is covering the sign for a bazaar. Respublika, which bills itself as a pro-business party, is represented in the outgoing parliament, but it is highly uncertain that they can repeat their 2015 performance, when they formed a coalition with a popular nationalist party and thereby garnered 20 percent of the vote. 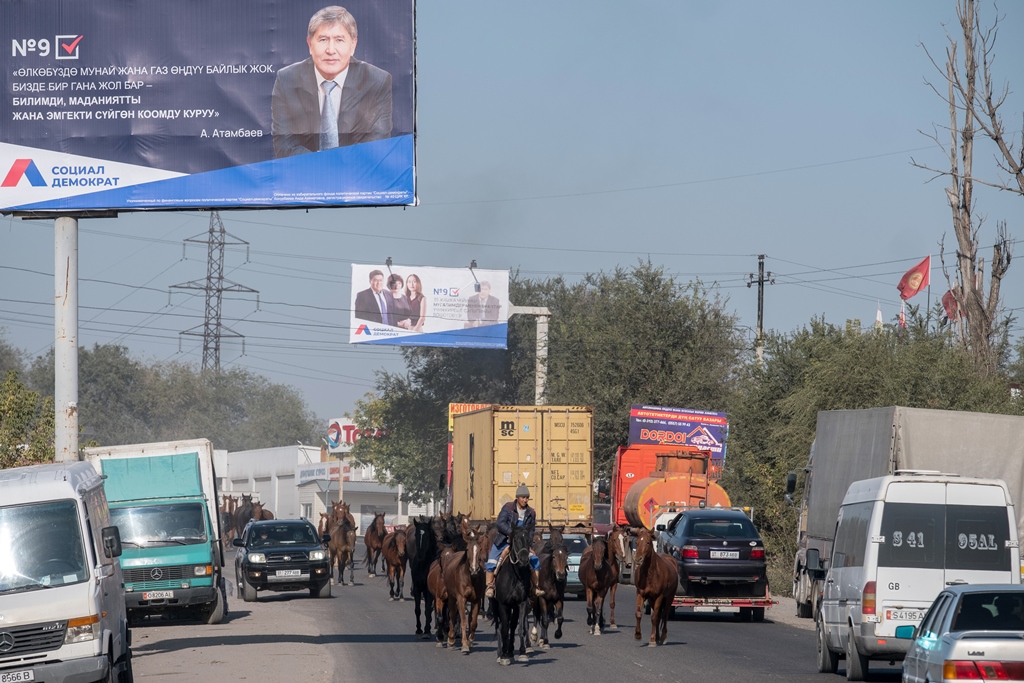 Both these billboards are for the Social-Democratic Party of Kyrgyzstan, or SDPK. The collapse of this one-time party-of-government has been startling for its rapidity. Its founder, former President Almazbek Atambayev, seen on both billboards is in prison and the party stands almost no chance of winning seats. 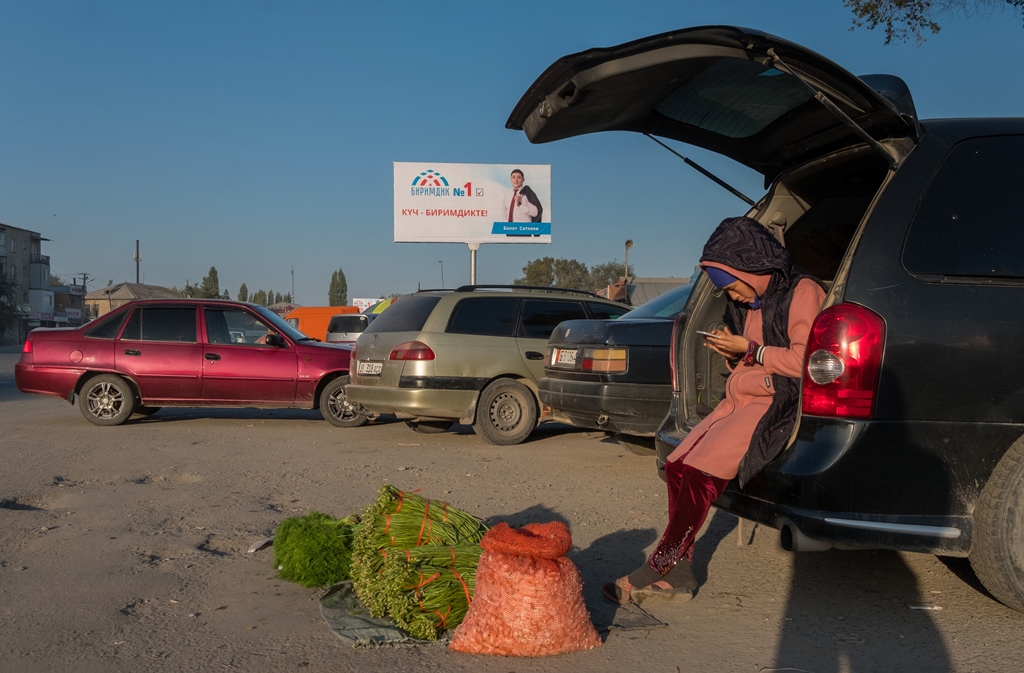 Birimdik, once more, informing its voters that “Our Strength Is in Our Unity.” 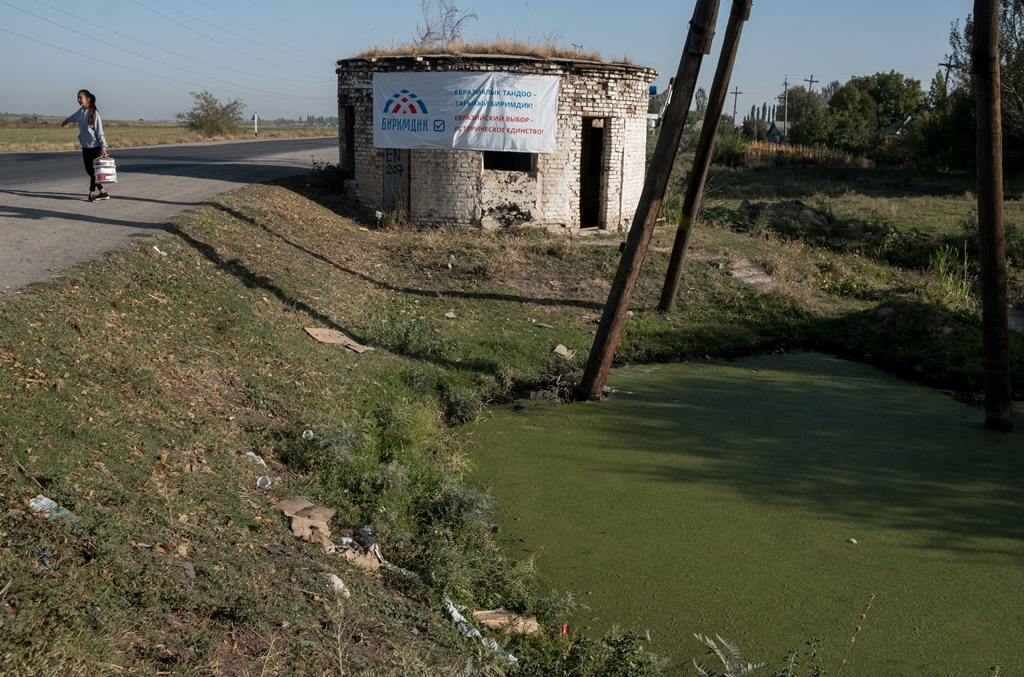 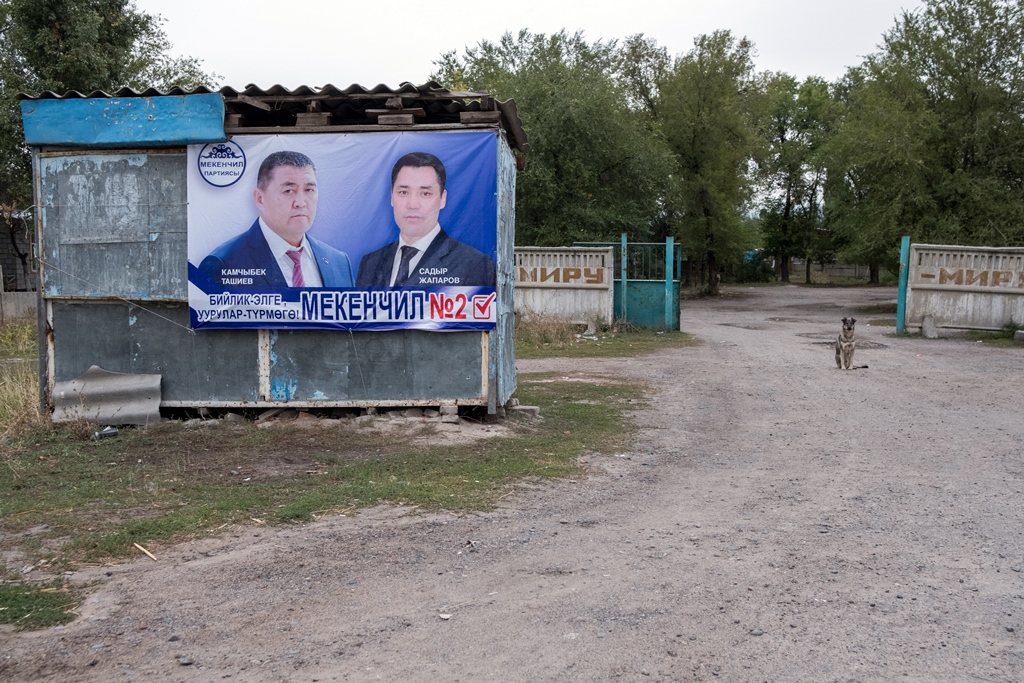 The slogan on the wall behind this poster for Mekenchil reads “Peace to the World.” The party’s sign, meanwhile, reprises their watchword: “Power to the People. Thieves Should be in Prison.”