The cause of the problem may lie in Russians hoovering up all the available greenbacks. 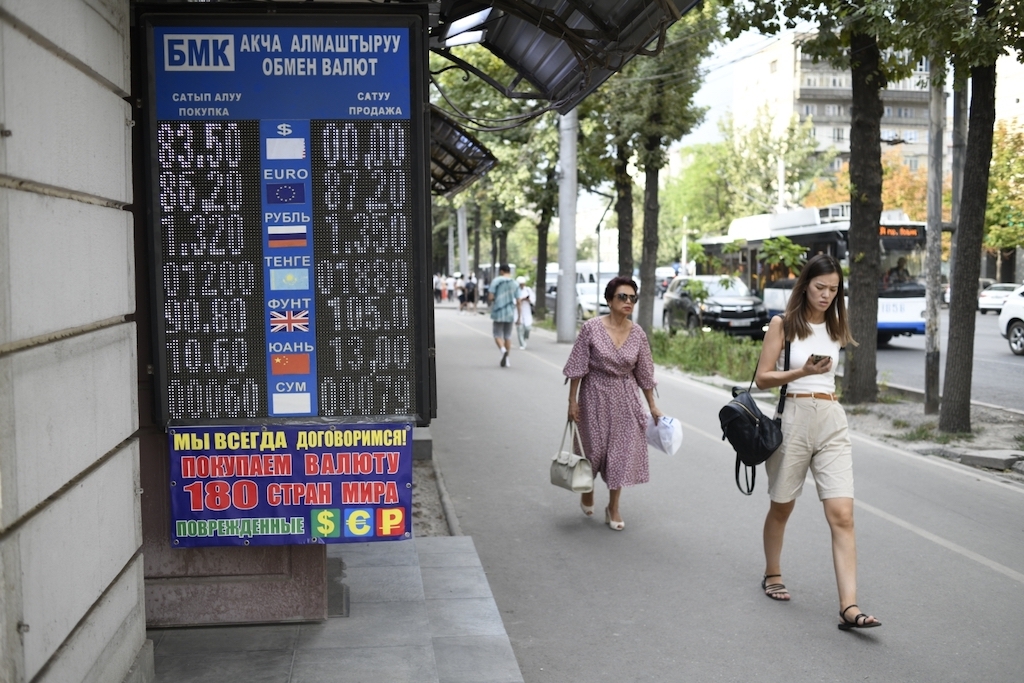 Exchanges offices have so few dollars that they don't even list a price for sale. (Photo: Danil Usmanov)

For the past month, Kyrgyzstan has been experiencing a severe shortage of dollars.

Banks are rationing how many greenbacks they give customers – when they have any to give out in the first place.

As with many other problems these days, this one has its roots in Russia’s war against Ukraine.

In an attempt to maintain the stability of the foreign exchange market in Russia, the government there banned the export of anything more than $10,000 in hard currency.

As Aida Karabayeva, an official representative of the National Bank in Bishkek, told reporters earlier this month, Kyrgyzstan has customarily received most of its dollars from Russia or Kazakhstan.

Now, something else is happening. Russian nationals have been transferring or bringing large amounts of rubles to Kyrgyzstan and then cashing them out as dollars.

The National Bank in March banned companies from taking dollars out of the country, but no such prohibition is in place for individuals.

The outflow of dollars has left the country running at a roughly 7-10 percent deficit of the currency to requirements, Karabayeva said.

While the lack of dollars may be causing headaches for people who need them to conduct business transactions, at least one set of businesses is profiting. Namely, banks and exchange offices doing the currency trades. Some are wondering if speculators might not just be shipping their dollars out of the country in bulk for a quick buck.

The Kyrgyz som is particularly strong at the moment – around 83 to the dollar, higher than it was before and around the start of the Ukraine war. In mid-March, the som was trading at more than 100 to the dollar.

The National Bank’s explanation for this is that the rate is reliant to a strong extent on the volume of cash in circulation. With a limited amount of hard currency banknotes to be had, people are simply keeping their money in their bank accounts.

This is not to say people are not trying to cash out into dollars, which retains its strong appeal. Many make daily trips to the bank to withdraw whatever they can.

Erika Isayeva, a 24-year-old Bishkek resident, says she regularly calls banks in advance to check whether they have stocked their ATMs with dollars. At times, she has to zig-zag around the city to get banknotes.

“One time I wanted to withdraw dollars and I asked at which ATM I could get them. They told me that they only had them at the Avangard business center. By the time I got there, within 40 minutes, they [the dollars] were already gone,” Isayeva said.

The hard currency shortage has been looming for some time. In April, the banking regulator mandated that cash transfers to Kyrgyzstan be received or cashed out in som. Anybody wishing to hold foreign currency, even if only in virtual form on foreign money-denominated accounts, have since that time had to perform an exchange operation.

That has been a boon for banks. According to figures collated by 24.kg news agency, domestic banks performed 10.8 billion som ($130 million) worth of currency exchanges in the period from January to June this year. That is seven times more than in the same period in 2021.

“Bank revenues have increased, but interest rates on loans and deposits have not changed radically,” Musuraliyev said.

Musuraliyev said he believes banks will probably up the size of commissions for cashing out dollars due to the difficulty they are experiencing getting hold of the currency.

One measure for easing the problem, said Musuraliyev, would be to restrict the amount of dollars that can be taken abroad – as Kazakhstan did in March. The downside of that solution would be that it would increase the likelihood of corruption at customs control points, he said.