Kyrgyzstan: “Where is Equality? Where is Justice?” – Imprisoned Rights Activist 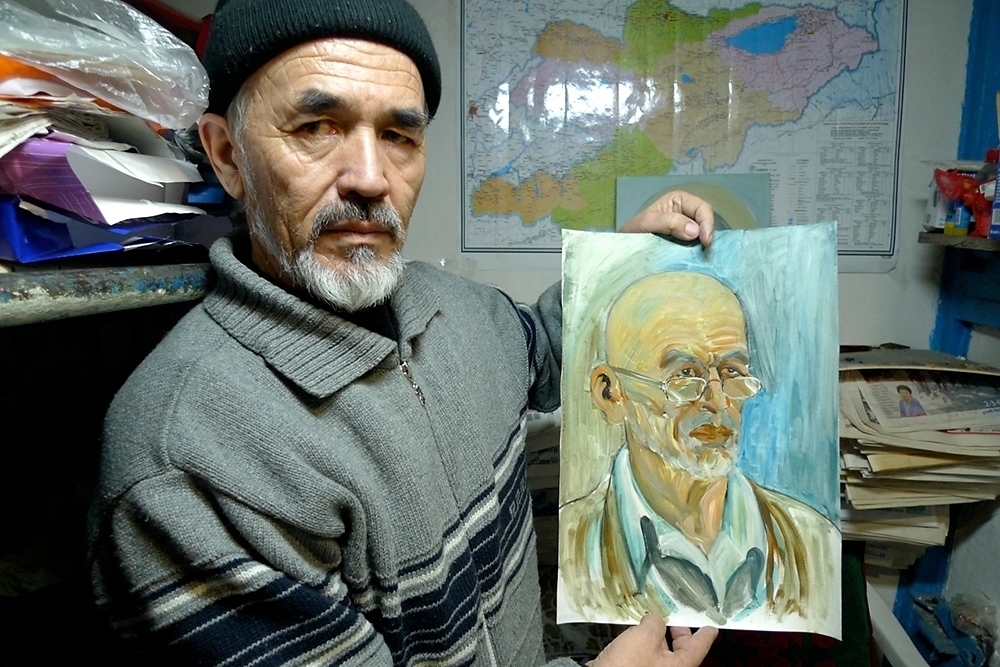 Human rights activist Azimjan Askarov in his basement cell with one of his self-portraits. (Photo: Nate Schenkkan)

Wrapped in a quilted robe, a thick file of papers about his case resting on the table in front of him, Azimjan Askarov is unequivocal when it comes to assigning blame for his imprisonment.

“People would often ask me, ‘Aren’t you afraid of the police?’ And I’d say, ‘Why? I work on the basis of the law. What’s there to be afraid of?’ But in the end they did what they wanted,” he said.

In a February 2 interview with EurasiaNet.org, Askarov, a human rights activist and police critic who is serving life term in prison for allegedly stoking a violent clash in southern Kyrgyzstan back in 2010, defended his innocence and discussed the country’s future. While lauding newly elected President Almazbek Atambayev’s tentative moves to mitigate ethnic tension, Askarov still criticized the state’s treatment of minority Uzbeks such as himself.

Askarov appeared psychologically resilient, but suffering physically from asthma and what he described as “worsening health.” His imprisonment is based on charges that in June 2010 he led a group of Uzbeks in clashes against police in Bazar Korgon, the small village where Askarov had long been known as a persistent critic of police misconduct. One officer and as many as 23 civilians died in those clashes, which occurred against the backdrop of widespread ethnic violence across southern Kyrgyzstan in June 2010.

Askarov was arrested and convicted of complicity in the death in a trial that took place amid an atmosphere of angry nationalist sentiment and was disrupted by multiple breaches of justice. On December 20, 2011 Kyrgyzstan’s Supreme Court denied his final appeal.

Askarov, 60, is now held in an 8-by-5-foot basement cell at correctional colony No. 47, a decrepit facility in southwest Bishkek.

The hour-long interview was conducted not in Askarov’s cell, but in a room prison guards said would be warmer. During the interview only a young guard was present, inattentively dozing through the conversation. Askarov appeared to speak freely, without fear of consequences. He described at length the torture he had experienced during his initial detention, but said that he was being treated reasonably well in his current confinement. “They treat me with respect, and I treat them with respect,” he said.

Throughout the interview, Askarov defiantly maintained his innocence in the charges against him. Numerous human rights organizations have cited procedural violations in Askarov’s trial and appeals, including the absence of any witnesses called for the defense, as well as physical attacks on Askarov, his co-defendants, and his lawyer during the trial itself.

Askarov said he was brutally beaten while detained in Nooken, the southern town where his trial was held over his lawyers’ protests. “They nearly killed me,” he said, referring to local police. “They held my arms behind my back, and took a weight filled with water, and hit me with it [in the stomach]. They hit me over the head with it so that huge lumps rose up.” He also said he saw witnesses beaten bloody to force them to testify against him.

He connected his case to broader problems with democratization in Kyrgyzstan, a multi-ethnic republic where 70 percent of the population is Kyrgyz, and minorities like Uzbeks are underrepresented in the parliament, in local government, and in the security forces.

“It is the development of nationalism that led to this situation,” he said. “We always bragged that Kyrgyzstan was an island of democracy in Central Asia. But that’s on paper only. There are 82 nationalities in Kyrgyzstan. But only the titular nation [ethnic Kyrgyz] can organize rallies and block roads. Uzbeks don’t have the right to say what they think and speak their demands. Where is equality? Where is justice?”

Askarov commended the new president on his proposal to remove the nationality line from Kyrgyzstan’s passports. In a holdover from Soviet times, the primary document all Kyrgyz citizens carry identifies bearers as Kyrgyz, Uzbek, Russian, or whatever nationality they possess. Removing this requirement would be a “brave, magnificent step,” said Askarov, adding that the government should also ban nationalist rhetoric in the press.

On the subject of a presidential pardon, Askarov said he would refuse to apply for one if it entailed admitting guilt, but that he and his lawyers were discussing how to apply without doing so. “But for me to beg that I be pardoned by saying that I consider myself guilty—I have no interest in that. Let them kill me.”

Askarov’s health has recently become an issue of international concern after human rights organizations called on Atambayev to extend Askarov a pardon on humanitarian grounds. During the interview Askarov’s speech was frequently interrupted by a hacking cough, the consequence, he said, of asthma developed during his confinement in the damp basement cell heated by a coal stove, the dust from which affects his breathing.

“After three days, the television screen turns black with dust, you wipe it with a finger and it comes away black. And I’m breathing that. My health is diminishing,” he said. Although Askarov said that prison authorities have promised to transfer him out of the basement, so far they have not.

During his confinement, Askarov, who graduated from art school, has taken up drawing again, doing portraits of fellow prisoners, guards, and himself. At the suggestion of a psychologist, he has also done a set of three landscapes.

Although never religiously observant before, Askarov has taken to studying the Koran four hours each day, learning the Arabic alphabet, and now memorizing sections of the holy book.