Atambayev is changing his tune as he tries to scope out allies. 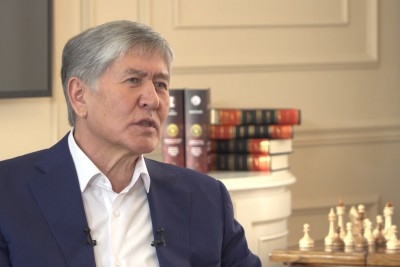 The political drama that has gripped Kyrgyzstan over the past few months increasingly looks like it will end in a whimper instead of a bang.

The nation’s once-combative former president is doing much of the whimpering.

In a roundly mocked December 11 television interview, Almazbek Atambayev spoke of his regrets over how he left things before concluding his single permitted term in office late last year.

He picked the wrong man to succeed him, he moaned. And he unjustly hounded that man’s opponent, he lamented.

There was a time last year when it seemed a reasonable bet that businessman Omurbek Babanov might win the October presidential election. But Atambayev, eager to help his then-ally Sooronbai Jeenbekov secure the vote, threw every obstacle possible in Babanov’s way.

Babanov was thoroughly trashed by pro-government media. State television and dubious pop-up news websites put it about that he was ethnically less than fully Kyrgyz.

For safe measure, security services then opened a criminal investigation against Babanov on the grounds that innocuous remarks he had made on the campaign stump were actually incitements to inter-ethnic hatred.

Facing likely imprisonment on that count, as well as an additional extravagant charge of coup-plotting, Babanov left the country immediately after the election.

The received wisdom is that Atambayev’s plan was to install Jeenbekov as a puppet president and to continue running things from behind the scenes. Much to Atambayev’s dismay, Jeenbekov turned out to have a mind of his own and has easily cowed his predecessor into submission.

This has prompted a rethink and self-pitying introspection from Atambayev.

“The [criminal cases] against Babanov should be closed. We need to thank him,” he said in a rambling interview with the April television channel, which he owns.

The ex-president now even claims that he asked Jeenbekov and two holdover appointees to close the cases against Babanov in the months after he left office. But to no avail.

“In the last year did [Babanov] really say something, do something? Did he do anything to disrupt the peace?” Atambayev continued. “On the contrary, it turns out he was deceived by Jeenbekov and I. I feel uncomfortable over this.”

This has all generated much snorting derision among the public.

Independent outlet Kaktus Media produced a helpful rundown of all the insults Atambayev had hurled at Babanov during the testy political season of 2017.

Babanov was a God-cursed provocateur “groveling before money.” He had been “infected by the bacteria” of Kyrgyzstan’s hated and deposed ex-ruling families. And so on and so forth.

The change of tack is clearly a remarkably clumsy act of plotting. Atambayev has watched whatever political influence he once had whither away to almost nothing. Since his bust-up with Jeenbekov, he has seen one ally after another slung into jail on corruption charges. His most ardent cheerleaders have now spurned him or slunk away.

If the hope is that a forgiving Babanov might return to the political scene, what are the prospects?

He is certainly one of only a few figures with enough political heft to slow Jeenbekov’s ominous momentum. Plenty of people disillusioned with the current stagnating scene would welcome his return.

But Babanov, a businessman first and politician second, likely has little interest in performing the role of counterweight.

Time and time again he has chosen safety over real opposition politics. That was shown most clearly after his defeat in October, when he promptly disavowed his key political assets — notably, the parliamentary party he once controlled — in the apparent hope of keeping his financial ones intact.

Atambayev can plead all he likes, but he is on his own.