Babanov may have parliamentary elections in his sight. 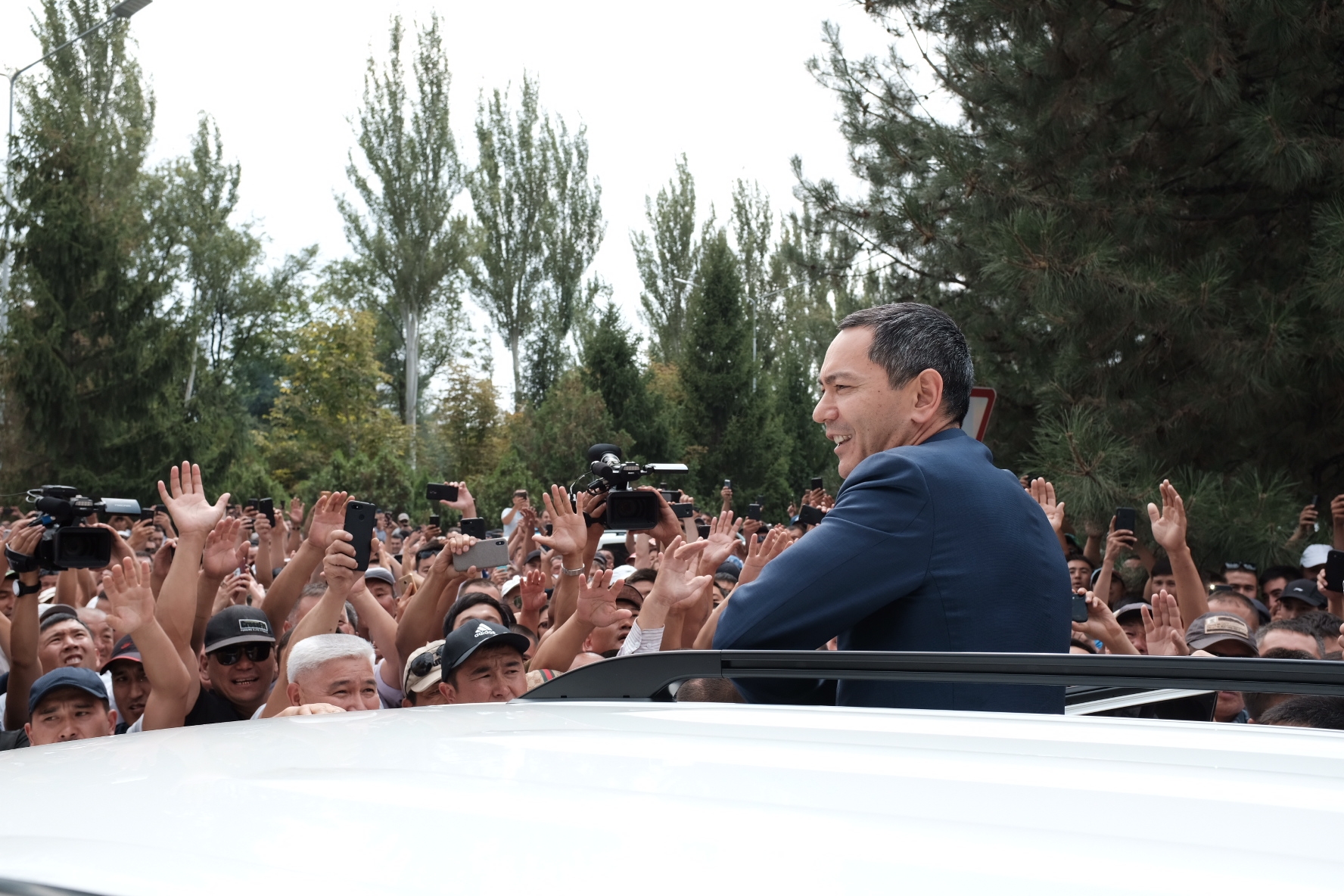 Self-exiled political big-hitter Omurbek Babanov has returned to Kyrgyzstan, injecting a further dose of uncertainty into a season of turbulence.

The multimillionaire businessman, former presidential candidate and former prime minister, who is wanted by the authorities, was met at Bishkek airport on August 9 by a large crowd of jubilant supporters.

His return may pose another puzzle for President Sooronbai Jeenbekov, who this week grievously fumbled neutralizing another major rival, his mentor and predecessor-turned-foe, Almazbek Atambayev.

Babanov said before leaving Moscow that he was coming to Kyrgyzstan – for the first time since late 2017 – to do his bit to ease the tensions that have gripped the country over the past few days.

Political life in Kyrgyzstan has been dominated for months by the simmering standoff between Jeenbekov and Atambayev.

Things came to a head on August 7, when special forces were dispatched to Atambayev’s redoubt in the village of Koi-Tash to forcibly take him in for questioning in relation to an ongoing investigation into the early release of a crime boss in 2013. The attempted detention was met with firm resistance and descended into a violent confrontation that led to the death of one special forces officer.

Atambayev was, however, successfully detained the following day. He may now face murder charges.

Babanov’s role in the Jeenbekov-Atambayev drama is a curious one. He was the runner-up contestant in the October 2017 election, which he lost despite running by far the slicker and more effective campaign. Jeenbekov, a dour and uncharismatic personality, secured 54 percent of the vote largely with the support of then-President Atambayev and the state resources placed at his disposal. Many vote observers also alleged there had been considerable electoral trickery. Jeenbekov and Atambayev fell out in the months after the election.

To seal Jeenbekov’s hold on power and avoid any unpleasant surprises from disgruntled voters, the General Prosecutor’s Office initiated criminal investigations against Babanov – for purportedly inciting ethnic tensions while on the stump and plotting the violent seizure of power. With those flimsily formulated criminal charges hanging in the air, the businessman acted protectively and fled the country. The seizure of power charge has since been dropped.

There was uncertainty when Babanov announced his return whether he would be arrested immediately upon arrival in the airport. But mindful of the widespread unrest that was caused by the detention of Atambayev, Kyrgyz authorities appear to have thought better against it.

Even in the airport, Babanov sought to pointedly distinguish himself from Atambayev, whose dramatic detention was precipitated by his three-time refusal to abide by police summons.

Speaking to a gathering of his supporters, Babanov said he was, if summoned by the security services, prepared to submit to their instructions.

“The main thing is prosperity in this country,” he said. “For now, I just need to recover. I have not been in the country for one year and nine months.”

Babanov said that after leaving the airport he would go to see his family. 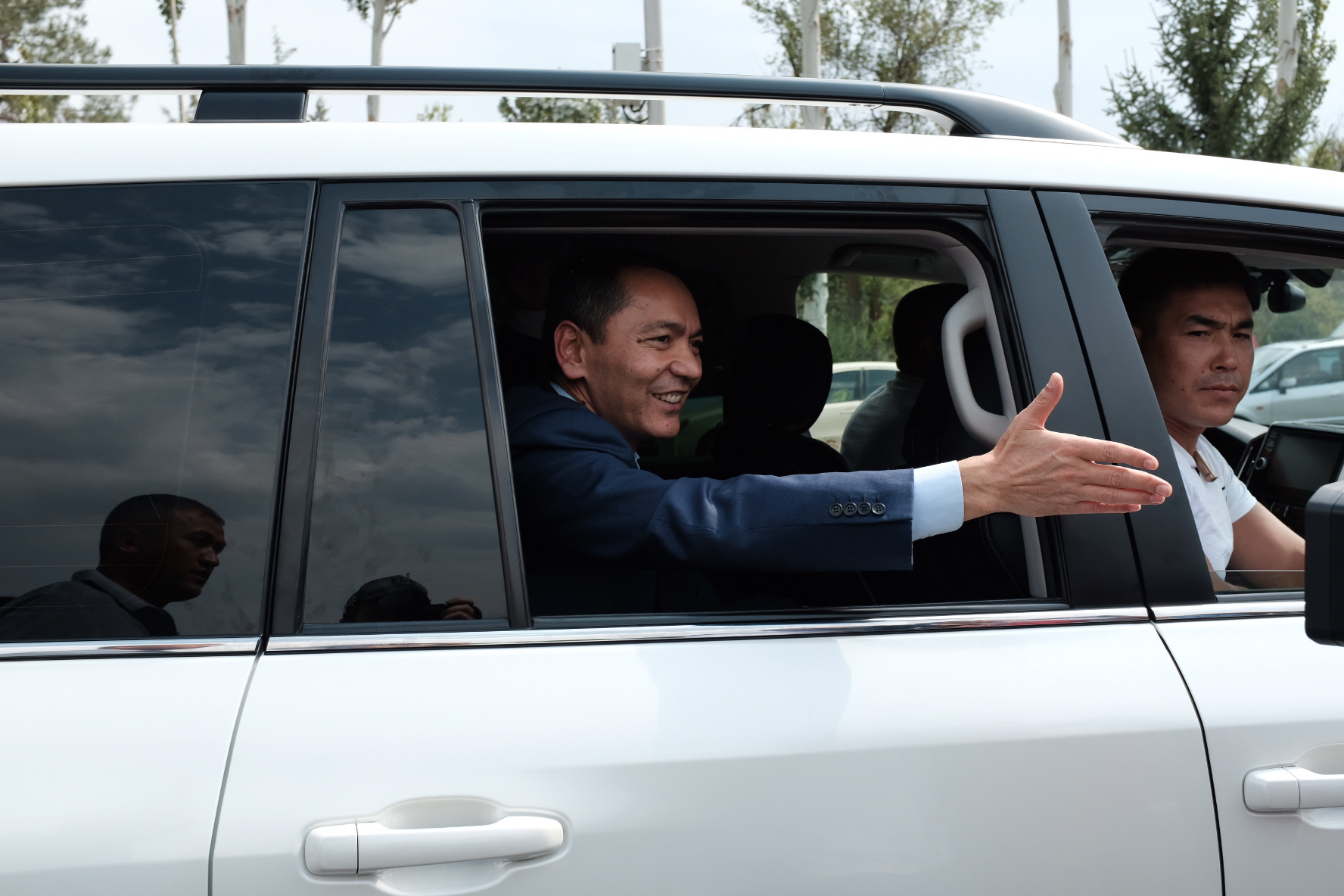 There may be a degree of canny political calculation in this development. The Atambayev saga has left Jeenbekov’s authority severely weakened. The public standing of parliament, which has allowed itself to be converted into a catspaw of the presidential administration, has also been undermined.

Although Babanov was shut out as head of state, he still retains credible avenues through which to pursue his political ambitions. His Respublika party already holds a healthy chunk of seats in parliament through its partnership with another party. The last parliamentary elections were in 2015, which means a fresh vote can happen no later than 2020. Some have speculated that the political situation may force an earlier election, and Respublika would be primed to perform strongly.

Babanov’s presence in Russia all these months additionally hints at the possibility that Moscow, which plays an outsized role in maintaining Kyrgyzstan’s security and economic stability, has seen him as a viable back-up option all along. Babanov's homecoming could only have happened with Moscow’s blessing.

The Kremlin played a strange game in the Atambayev saga.

In late July, the former leader flew to Moscow from a Russian-controlled military airbase east of Bishkek. Much to many people’s surprise, he was immediately escorted to the Kremlin, where he met Russian President Vladimir Putin, who went on in a public statement to strongly intimate to the Kyrgyz government that it would be a dangerous mistake to arrest Atambayev.

It appeared like a remarkable (and confusing) act of defiance when the Kyrgyz security services, which analysts believe to be strongly infiltrated by Russian operatives, went ahead and tried to capture Atambayev all the same. Moscow reacted, however, with only mild concern and issued boilerplate bromides about how it would be improper to interfere in Kyrgyzstan’s internal affairs.

Undaunted by the rioting sparked by Atambayev’s detention, Russian Prime Minister Dmitry Medvedev arrived in Kyrgyzstan on schedule on August 8 to attend a long-planned regional summit on the shores of Issyk-Kul Lake. Upon arrival, he was met warmly by Jeenbekov.

By all appearances, Russia is satisfied with the way things have turned out.