Police detained marchers, but not attackers. 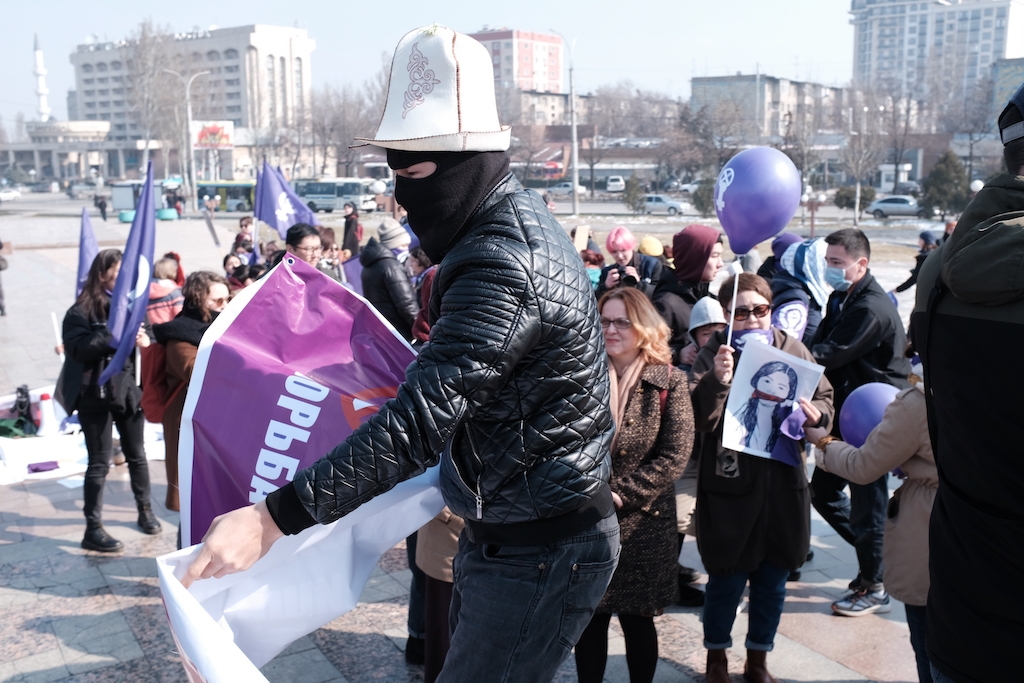 Preparations for a parade in support of women’s rights in Kyrgyzstan’s capital went ahead on March 8 following the last-minute reversal of a court-imposed ban, but the event was disrupted before starting when participants were assaulted by a group of masked men.

The dozens of attackers, many of them in traditional ak-kalpak felt hats and some of them carrying sticks, shoved participants to the ground and ripped signs from their hands. When the mob dispersed, police arrived on the scene and detained the people who had been attacked and loaded them onto waiting buses.

As 70 or so detainees were marshaled into an enclosed section of the nearby Sverdlovsk district police station, in Bishkek, some began to shout protest slogans. More than hour after people were taken into the precinct, detainees broke into a rendition of the national anthem, holding their hands to their chest. Police stood to attention.

“Today they wanted to throw our rights into the trash. But now our march will take place in Sverdlovsk district police station instead,” one organizer, Mokhir Suyarkulova, told reporters.

Among the detainees was Zere Asylbek, a singer in her early 20s who kindled lively public debate in 2018 after releasing a viral video dwelling on the problems discrimination and domestic violence against women in Kyrgyzstan.

Whether the march would even take place had become the subject of a legal tug-of-war in the days before International Women’s Day, which is marked on March 8.

A court in Bishkek ruled as late as March 5, agreeing to a petition from city hall, that the event should be canceled to prevent the possible spread of the novel coronavirus COVID-19. No cases of the disease have been confirmed in Kyrgyzstan to date. Organizers suspect that the reason given was a smokescreen and that authorities were opposed to the event in principle and wished to defer to the often-violent sentiments of radical-chauvinist groups.

A Eurasianet journalist who asked police at Sverdlovsk precinct why marchers had been detained was told by one officer that the rally was unauthorized. City hall said it had received no formal notification the march was to proceed.

Police took away water bottles from detainees and failed to provide anybody with anything to drink. One young woman who experienced a panic attack was given no water, but was instead asked by one officer: “Why did you go out to the march if you’re so sick?”

The intended march had acquired special salience this year against the backdrop of steady reports of assaults, frequently deadly, carried out by men against their wives across the country. Women’s rights groups have long argued that the authorities are not doing enough to tackle the problem and that police routinely make life hard for victims coming forward to report their plight.

Elvira Surabaldiyeva, a member of parliament who often takes markedly pro-government positions, criticized organizers of the planned march, saying they had failed to give advance notice.

“It is normal to give notice, and this time they did not do that, although it would have been worth it, if only for their safety,” she wrote on Twitter. “The other side [the attackers] were told there was going to be a rally in defense of the LGBT community, so this reaction was to be expected.”

It is unclear from Surabaldiyeva’s remarks who is meant to have disseminated the impression that the march was in support of LGBT rights. As increasingly strong homophobic sentiments that have taken root in the past few years – in large part as a result of similar trends in Russia, whose cultural influence remains strong in Kyrgyzstan – this theme has readily been exploited by figures sympathetic to the authorities as means by which to discredit activists critical of the government.

The women’s march last year proceeded peacefully on the day, but participants were later harassed online after it was reported that some people had attended the rally with flags expressing solidarity with the fledgling LGBT community. Organizers are not known to have made that topic a focus of their event.

The appearance of purportedly either pro- or anti-LGBT groups at unrelated political events has become something of a routine occurrence at political gatherings in Kyrgyzstan.

A group of unidentified people turned up at a tense anti-government rally earlier this month with signs fulminating against the LGBT community, apparently with the intent of whipping up anger in the crowd. In the end, however, they were chased away.

Conversely, when anti-corruption activists were planning a rally in December, largely faceless online trolls conducted a disinformation campaign to imply that activists were covertly seeking to promote an LGBT rights agenda.