Organizers are skeptical about the official reason. 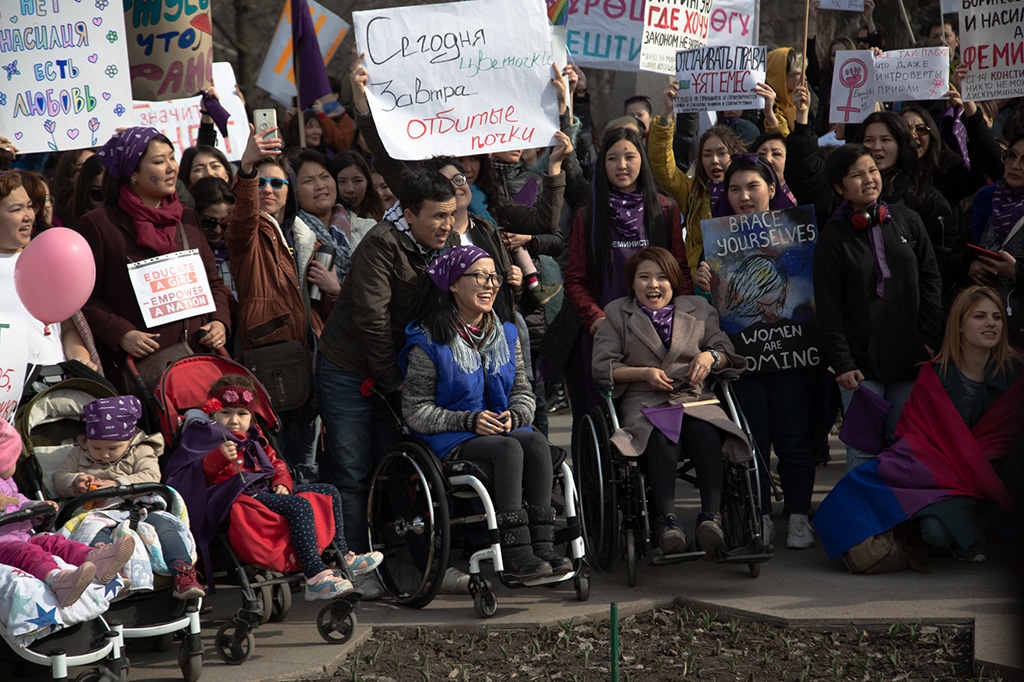 The International Women's Day march in Bishkek in 2019. (Photo: Kloop.kg)

A court in Kyrgyzstan’s capital on March 5 ruled to forbid an upcoming march in support of women’s rights, citing concerns over the possible spread of the novel coronavirus COVID-19.

Organizers suspect, however, that the purported threat of the virus, of which there have been no confirmed cases in Kyrgyzstan, is serving as a smokescreen to halt an event that has irked the authorities in the past.

In her ruling at the Pervomaisk district court, Judge Zarema Beisheyeva argued that it was necessary to avoid large gatherings as a precautionary measure. In making her case, she cited recent remarks by President Sooronbai Jeenbekov, who called on the government in January to draw up a plan to limit the economic fallout of the unfolding global crisis.

The March 8 mass walk through Bishkek was to focus in particular on the unrelenting scourge of domestic violence. Grisly tales are commonplace. Local media reported this week, for example, that the district court of Sokuluk, which lies just west of Bishkek, sentenced a 51-year-old man to 14 years in prison for killing his wife with an ax because she purportedly irritated him while he was watching television.

Organizers of the March 8 rally from a group called Bishkek Feminist Initiatives, or BFI, believe the court has been too hasty in making its decision and suspect the justification that they provided is unconvincing. Previous marches held on International Women’s Day have been opposed by conservative and nationalist groups.

Last year, one such group actively lobbied the government to stop the event and threatened to disrupt the march with force if it went ahead. Bishkek city hall initially banned the march, but then quickly reversed its decision. In the end, the mass walk went ahead, and police were deployed in numbers to provide protection.

But the trouble began after the march. Participants were harassed online after it emerged that some people had attended the rally with flags expressing solidarity with Kyrgyzstan’s fledgling LGBT community.

BFI questioned the coronavirus explanation, saying that the same event-canceling rationale has not been applied to plans to hold the annually recurring celebrations in May to mark the end of the Second World War. Others contend that the Women’s March ban is suspiciously selective.

“The risk of infection does not only exist for rallies and processions, but for any places where there are crowds. So why are bazaars, where hundreds and thousands of people work, still functioning?” journalist Kanat Kanimetov wondered on Facebook.

Women’s March organizer Gulyayim Aiylchy said that during the two court hearings to consider the possibility of a ban, it became clear that it was the event itself that was bothering the authorities, who were the ones to file the motion for a ban.

“Representatives from the city hall said that they did not like the slogan ‘My body is my business.’ Our lawyer explained in simple language that this means that a woman has the right to decide how she should look, thin or fat, or even if she wants to dress like Schwarzenegger. At that point, they all agreed and parted amicably,” she said.

But then the city hall still decided to push ahead with its attempt to pursue the ban. During a second hearing, a representative from the Pervomaisk district police department, Turusbek Kasymakunov, said the march was contrary to the Kyrgyz mindset.

“We should not only consider the interest of the initiative group. We should think about the health of citizens,” he said.

And anyway, he added, addressing march organizers: “How much [domestic] violence have you actually prevented through your marches? Last year, people came out with posters reading: ‘I am trans and proud.’ This does not conform to our mentality.”

Aiylchi said these expressions of hostility toward feminists and the LGBT community, which are in any case not the focus of their event, feel like a relatively recent phenomenon.

“Before, we [Kyrgyz people] were tolerant to people who were different, but now we are turning more to nationalism and putting up boundaries for ourselves,” she said.

That trend took a pronounced turn in November amid a furor over the maiden Feminnale of Contemporary Art in Bishkek, which also centered heavily on the question of domestic violence and women's economic freedom.

Traditionalists were especially incensed by one performance-based exhibit that involved two naked female performers wandering the exhibition hall. Bowing to pressure, Culture Minister Azamat Zhamankulov ordered that part of the exhibition to be cancelled and forced the director of the National Museum of Fine Arts, Mira Dzhangaracheva, to tender her resignation.

March organizers have said they will try to appeal the court’s decision, but that they are harboring few hopes of success.

“We will try to do what we can to ensure that we have a march within the confines of the law,” Aiylchi said. “But the chances are small, so if it doesn’t happen, then we will try to hold this event in some other format.”