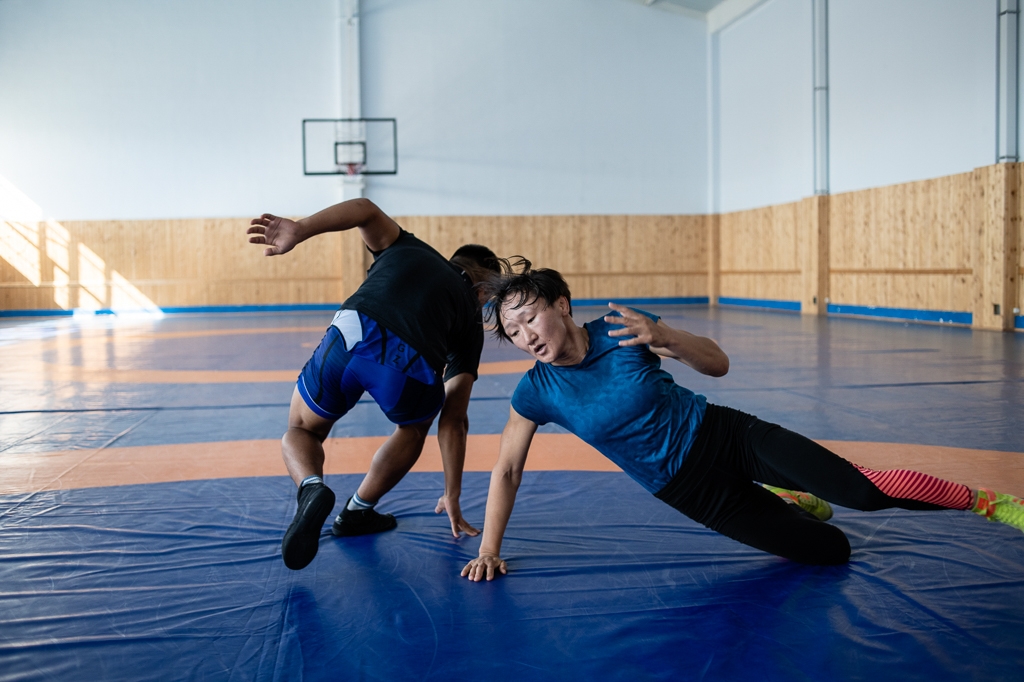 On the side of a five-story Soviet-era apartment block in central Bishkek, a mural shows a female wrestler emblazoned against Kyrgyzstan’s red-and-yellow flag, her arms outstretched in triumph.

The slogan on the mural – part of a global ad campaign by the car manufacturer Toyota and the International Olympic Committee – could hardly be more fitting: “Start your impossible.”

For the sportswoman depicted in the mural, two-time world champion and Olympic silver medalist Aisuluu Tynybekova, impossible began in the same place that it does for millions of Kyrgyz children.

Her village in mountainous Naryn province “didn’t even have a road to run on,” she recalled.

“Whenever I watched foreign films, I saw houses with gardens and garages, children with roller-skates and bicycles and activities to fill up their spare time,” Tynybekova said as she poured tea for two Eurasianet correspondents and her coach and mentor Nurbek Izabekov.

“All these things seemed practically unattainable to me.”

By the time Tynybekova was a teenager, she had seen enough.

“I looked around and asked myself: Why do I live here? I shouldn’t live here. This isn’t my place.”

Now 28 and one the most successful Kyrgyz sportspeople of all time, Tynybekova’s place is on the podium. 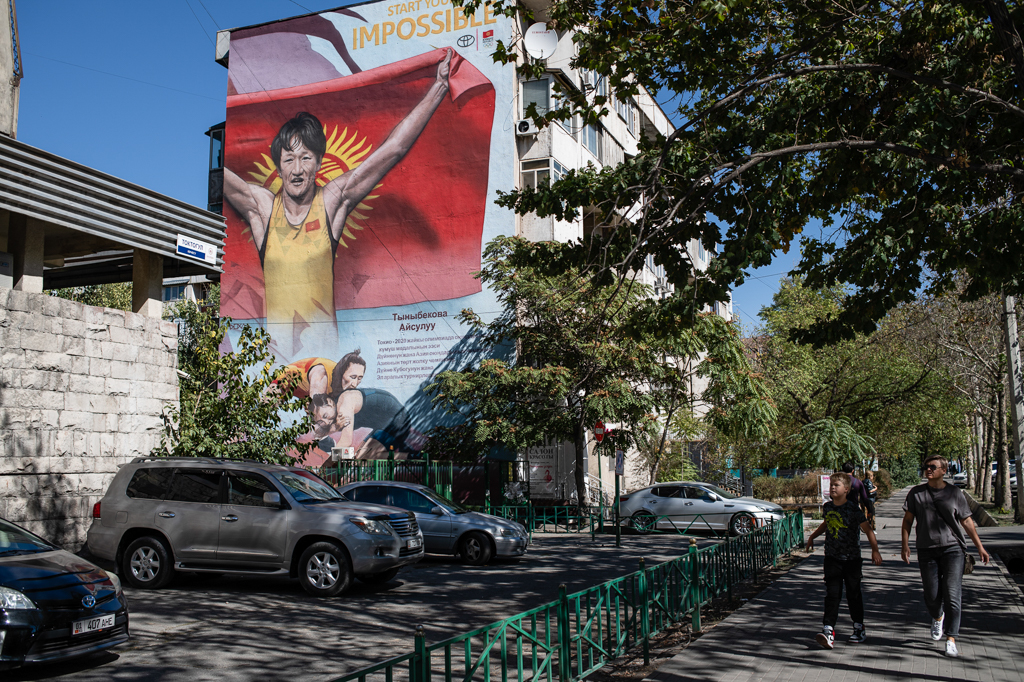 The successes of Kyrgyzstan’s women’s wrestling team meanwhile have put stereotypes about female athletes in a headlock, after the country produced its best Olympic showing since independence this summer in Tokyo.

“When we were starting out, people sometimes refused us entry into gyms,” Coach Izabekov recalled. “When I sparred with her, people would laugh at us.”

The feats of Tynybekova and an emerging generation of wrestlers that includes Tokyo bronze medalist Meerim Zhumanazarova, 21, and fifth-placed Aiperi Medet kyzy, 22, have shifted perceptions, he said.

“Trainers that used to work with boys are training women in parallel. Parents are getting in touch with us. They want their children to be the next Aisuluu, Meerim or Aiperi.”

Set against Tynybekova’s later achievements, the first leg of her road to greatness sounds like something plucked from the script of a Hollywood movie.

In fact, her story mirrors the struggle of many of compatriots.

The third daughter in a family of rural medics that worked on the farm to supplement their meagre incomes, Tynybekova decided to leave the village aged just 17 to finish her schooling in the capital.

She arrived in Bishkek with the equivalent of $10 and earned her survival by waiting tables, washing cars and clearing snow in the winter.

One of the places that she lived during this period was in the annex of the stadium of the State Polytechnical University.

Here she met Izabekov, in what would be a turning point for both of them. 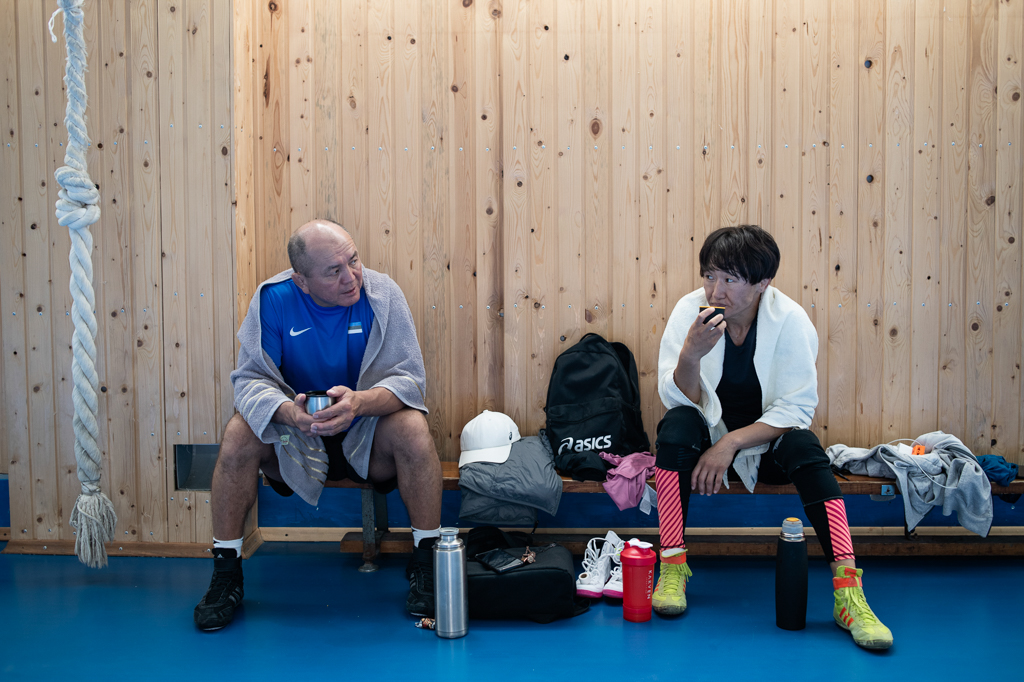 For Kyrgyz men, disciplines like freestyle and Greco-Roman wrestling are in the blood. Brothers and cousins grapple from a young age, encouraged by fathers and uncles.

Broad-shouldered and with a natural stamina that she attributes to her mother’s side of the family, Tynybekova’s first sporting love was running – “running in circles, running without aim” – before she tried her hand at karate.

Then came a women’s wrestling tournament in her village. She entered with only basic knowledge of the sport’s rules and zero technique. She faced five girls and beat them all.

A stadium groundskeeper told her that Izabekov was the man to hone her raw talents.

“I would go home and tell my wife: ‘Listen, that strange girl I told you about keeps bothering me, asking me to train her. What should I do?’” chuckled Izabekov, who admitted to once having doubts about female suitability to a sport where serious injuries are common.

That recollection has become a well-worn joke in his household.

After Tynybekova was booted out of her stadium digs by a rival trainer, she moved in with the Izabekovs, spending seven years under their roof as her coach molded the new-look women’s national wrestling team around its brightest talent.

Izabekov sets much store in his charges’ intellectual development, ordering dozens of books for them to read on tour. He is also fiercely protective of their need for rest.

When Eurasianet visited his training camp in the lakeside resort town of Cholpon-Ata, the wrestlers were preparing for the world championships in Oslo.

“They are just young girls and don’t yet have Aisuluu’s experience with the media. I don’t want you jinxing them,” he said. 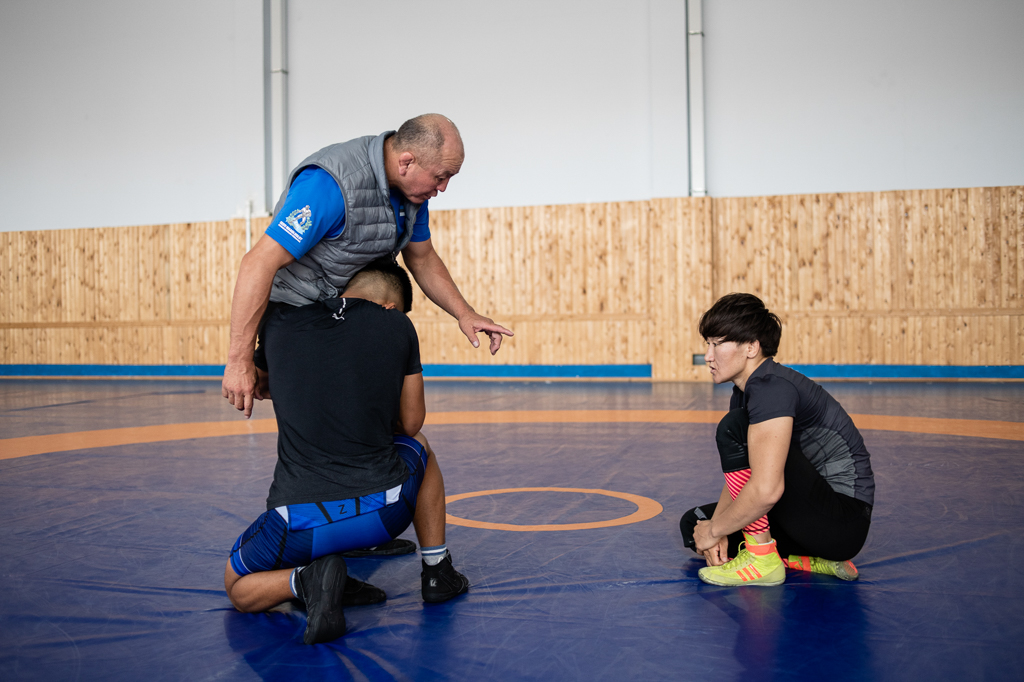 The approach seemed to work.

While Tynybekova successfully defended her world champion title in the Norwegian capital earlier this month, Kyrgyzstan gained a new world champion in Zhumanazarova, who scored gold in a separate weight category. Medet kyzy claimed a bronze.

It is the Olympics where Tynybekova still has unfinished business.

She began her first games in London in 2012 as an outside medal hope under the cloud of an assault charge. The incident occurred outside an underpass in Bishkek and after a trio of girls had knocked over Tynybekova’s friend. As she went to pick her off the ground, the girls began shoving her and pulling at her hair.

“I hit [one of the girls], but not hard because I know my own strength,” said Tynybekova.

The girl filed charges against the athlete, who told Eurasianet that her accuser’s family attempted to extort her to the tune of $20,000.

Tynybekova was allowed to travel to the games and handed a probationary sentence by a court on her return.

She is convinced that she was targeted in a set up.

“I never mind talking about this, because I am clean before the people,” Tynybekova said.

London did not bring Tynybekova a medal, nor did Rio, despite expectations raised by her improved showings on the world and regional circuits.

After falling short at her second Olympics, Tynybekova suffered depression.

“I had plans to [win a medal] then retire and start a family. But my plans popped like a bubble. I had no interest in anything. I couldn’t sleep, and when I did, I had nightmares about the last seven seconds of my [quarter-final] bout: 7-6-5-4-3-2-1, defeat. It lasted for about six months.”

There were tears, too, after she claimed silver in Tokyo, losing gold to a Japanese competitor she had defeated two years before. 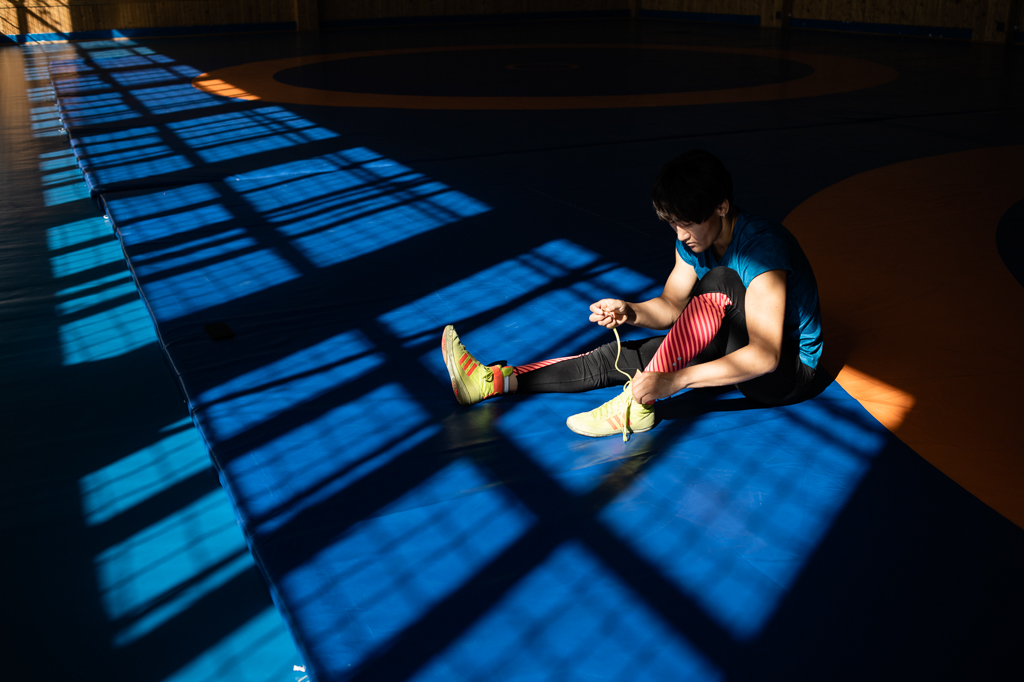 But there was no depression this time round.

Everywhere Tynybekova looked on social media, she found words of pride and support, after more than a thousand people had gathered in Bishkek’s central square to cheer her on.

“Aisuluu, well done. We honor you, we love you, you are our history, our gold, the pride of our Kyrgyzstan,” reads a typical post.

Tynybekova will be 31 by the time the next Olympics come around in Paris in 2024.

She remains just as determined to start a family but said that the public support for her helped her commit to one more shot at Olympic gold – something that Kyrgyzstan as a country has yet to achieve.

“We all wrestle with something. […] I simply wrestle on the mat, where there are rules, judges,” she told journalists after her latest triumph in Oslo, still breathless from her bout against American opponent Kayla Miracle.

“Through wrestling I show what is inside me and achieve results. We shouldn’t forget that we are girls, but I don’t agree that wrestling is a sport for men. All of us fight.”