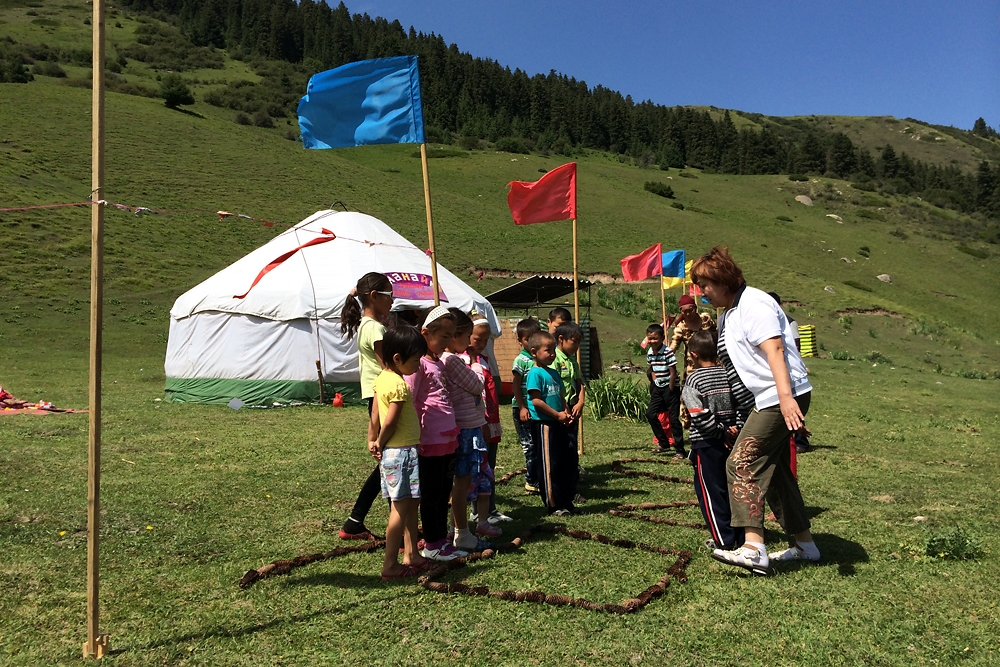 At first glance, it looks like another iconic felt yurt in a remote pasture high in Kyrgyzstan’s mountains. But step through the door and a visitor can quickly see it is no ordinary nomadic dwelling.

Tiny desks are arranged on the carpeted floor. The curved walls are festooned with fairytale characters. A whiteboard stands at one end. This yurt has been converted into something new for semi-nomadic Kyrgyz who spend the warmer months on the Aktash jailoo, or highland pasture: a school.

Fifteen families from the jailoo, perched in the mountains south of Lake Issyk-Kul, send their 26 children to the Ananaika preschool for three hours a day to help them make friends and prepare for elementary school. (Ananaika roughly means “sweetheart.”) Most are aged three to six.

During the school’s first weeks in operation in June this year, some children had trouble socializing, according to Jenishgul Sharsheeva, 45, the teacher.

“When they stay at the jailoo, where the nearest family can be more than a kilometer away, children hardly make any friends,” Sharsheeva explained, adding that even with her 18 years’ experience in teaching preschool in a village below the mountains, working with jailoo children was a challenge. “Many of them have never seen basic things like modeling clay and colorful pencils. For the first few days, some would try to eat the modeling clay; others would only draw with a black pencil.”

Over the course of the summer her students have learned to count to 10, differentiate colors, geometrical shapes and do some basic spelling.

The Soviet collectivization drive during the 1920’s and 30’s forced most Kyrgyz to abandon their traditional nomadic lifestyle. Yet, today some families still lead semi-nomadic lives, travelling into the mountains with their cows, horses and sheep to graze during the summer months. Few stay in the jailoo year-round; the semi-nomadic herder families mostly hail from remote villages, where their children receive only a rudimentary education. And few have the opportunity to attend preschool.

“Preschool is crucial for a child’s development,” said Burulai Aitikulova, education program officer at the Aga Khan Foundation (AKF), a non-profit that piloted the idea of jailoo-based preschools in 2006. “That’s why we decided to follow the children wherever they are to give them access to education.”

AKF has opened 20 jailoo preschools around Kyrgyzstan since 2006. Their idea is now being replicated by a local foundation run by former interim president Roza Otunbayeva. That initiative oversaw the opening of 35 jailoo preschools this year, including Ananaika. Hosting 20-25 children each, they hope to reach more than 700 kids this summer.

Asylbek Zhoodonbekov, a program coordinator at the Otunbayeva Initiative, explains that some families live far from the jailoo preschools, but still bring their children each morning on horseback. “That’s how much people want to educate [their kids],” he said.

Five-year-old Aelina walks more than a kilometer every day with two siblings and her grandmother, Chinar Chikeeva, to get to Ananaika. “In the mornings the children are so excited that they don’t want to have breakfast, they just want to go see their teacher and their new friends,” said Chikeeva, 52.

Chikeeva’s family stays at the jailoo for four months every year. There is no preschool near their winter village, but there is an elementary school. Aelina says she is especially excited to attend that school in two years’ time, “especially now that I know how to count.”

But for some children, the yurt may be the only schoolhouse they ever see. Thirty-nine-year old Gulzat Ishembaeva migrates year-round among pastures with her husband and seven children. None of her kids – the oldest is 21 – finished middle school. She’s not sure if her six-year-old son, Beksultan, who also attends Ananaika, will be able to attend school next year. “It’s far, and we don’t have a car,” said Ishembaeva. “But at least he joined this preschool. I can see him learning; I’m very happy about it.”

Less than a fifth of Kyrgyz children attend preschool, according to data compiled by the Ministry of Education and Science; most of them live in urban areas. The quality of Kyrgyz education has fallen since the collapse of the Soviet Union in the early 1990s, but even then, only 35 percent of children had access to preschool, says Aigul Kamalova, an expert on preschool education at the ministry. Kamalova says that the ministry is open to creative solutions, and hails the innovation of jailoo preschools.

Up in the jailoo, at Ananaika, the children are learning to differentiate a triangle from a circle by constructing the shapes with pinecones on the grass. “These children are so thirsty for education, for knowledge,” Sharsheeva, the teacher, said. “Teaching a kid who is seeing a book for the first time in his life is a different experience for me, but I love it and I hope that next year we can take more children.”