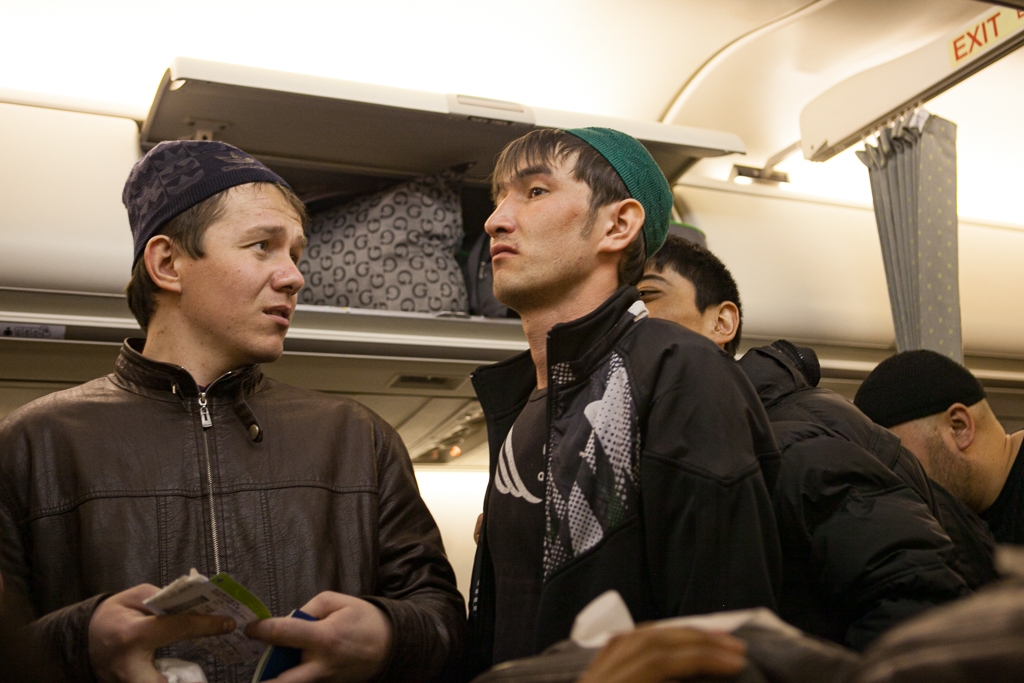 Homeward bound: There are too few jobs to occupy all the men returning. (Eurasianet file photo/David Trilling)

Sardor Mirzokarimov started out his working life in St. Petersburg about a decade ago as a kitchen assistant. Over the years, he progressed to become the manager of a restaurant.

That career is now over.

“The owner told us that as of March 1 he was placing everyone on indefinite leave. He said the reason was that the delivery of seafood supplies from Scandinavia, which made up the bulk of our menu, had dried up,” said Mirzokarimov, a 37-year-old from Kyrgyzstan’s second-largest city, Osh.

Mirzokarimov has now returned home, as many of his fellow Kyrgyz nationals are being forced to do.

As soon as he arrived in Osh, he began looking for work, but he has found nothing paying close to the 50,000 rubles he was earning in Russia. (That salary is now worth less than $400, but it was closer to $650 before the war in Ukraine began).

This dismal prospect is not tempering the rush of Kyrgyz people out of Russia, however. Fear and rumors are fueling the panic.

On March 3, Aibek Matmusayev, who received Russian citizenship in 2021, returned to his home country on one of the last international flights carried out by a Russian airline.

“I worked as a cab driver in Moscow,” the 29-year-old, a native of the Jalal-Abad region, told Eurasianet. “I got an audio message on a mailing list through social media. They said that young men were being mobilized for the war in Ukraine. Without giving it a second thought, I immediately quit my job. I told everyone I needed to have an operation.”

Matmusayev says he heard about several people now going through the process of applying for Russian citizenship who were summoned by migration officials and offered contracts to go serve with military forces involved in the assault on the Ukrainian city of Kharkiv. The men were offered a fast-track path to citizenship in return, he said.

“I don't know if this is true or not, but there have also been rumors about Asians with Russian citizenship being detained at subway stations and forcibly taken to the suburbs, where the army is allegedly preparing them to be sent to war,” he told Eurasianet.

Such claims, which have been circulating feverishly among Kyrgyz, Tajik and Uzbek expat communities, earned some vindication late last month when video footage featuring an Uzbek man saying he was driving a Russian army truck into Ukraine began doing the rounds.

Journalists from RFE/RL’s Uzbek, Radio Ozodlik, tracked down the man, who confirmed he had been offered a three-month contract and was earning a salary of 50,000 rubles. He told the broadcaster that the appeal of the job was that he would be able to quickly secure Russian citizenship that way.

Alexander Kim, a Russian blogger who runs a Facebook group about migrant welfare issues, is skeptical that anybody is being press-ganged into the Russian armed forces. He instead favors the idea that men are being offered short-term contracts of the type alluded to by Matmusayev.

“The issue is that people are being recruited as mercenaries, so that migrants can be used for military actions against Ukraine,” he told Eurasianet. “And people are moreover being offered fast-track Russian citizenship or some other preferential treatment, like high salaries.”

Valentina Chupik, a prominent Russian human rights activist who has worked for many years providing legal services free-of-charge to migrants, said that the mass exodus of expatriate labor has already begun.

“Quite a lot of people are leaving. I can’t be specific about the exact number, but there are at least hundreds, even thousands of people. Women and children are being sent home first,” Chupik said.

One Kyrgyz member of parliament forecasts that up to 70 percent of expatriates may return home. The economic implications are grim. According to World Bank estimates, around 83 percent of remittances sent home by foreign-based Kyrgyz laborers in the first three quarters of 2021 arrived from Russia. Remittances equal around 30 percent of the country’s economy.

“It’s not for nothing that people [in Kyrgyzstan] are concerned about social upheaval,” said Chupik. “It could happen within two-three months, as soon as migrants realize that their incomes in Russia have lost so much value that migration is no longer economically feasible.”

The Kyrgyz are not alone in wanting a way out.

“It isn’t only Asians with Russian citizenship who are leaving, but also Slavic Russians whom I know personally,” Chupik said. “There are all kinds of research organizations, anthropology associations, that kind of thing, who are offering stipends and secondments in Central Asian countries to Russian nationals, who are able that way to flee from the Russian authorities.”

Lawmaker Janar Akayev said that for many Kyrgyz expatriates, the motivation for getting out of Russia is by and large financial.

"We are in constant communication with our compatriots. Unfortunately, they are starting to experience big problems, and our migrants working in the service sector are the ones suffering first and foremost,” he told Eurasianet.

As major international companies, including many in the manufacturing and leisure sectors, quit the Russian market en masse, job losses will start mounting. Akayev predicts migrant laborers will be the first to be cut loose.

“All the relevant government departments and lawmakers have been discussing this topic behind closed doors and we have concluded that we urgently need to create new jobs,” he said.