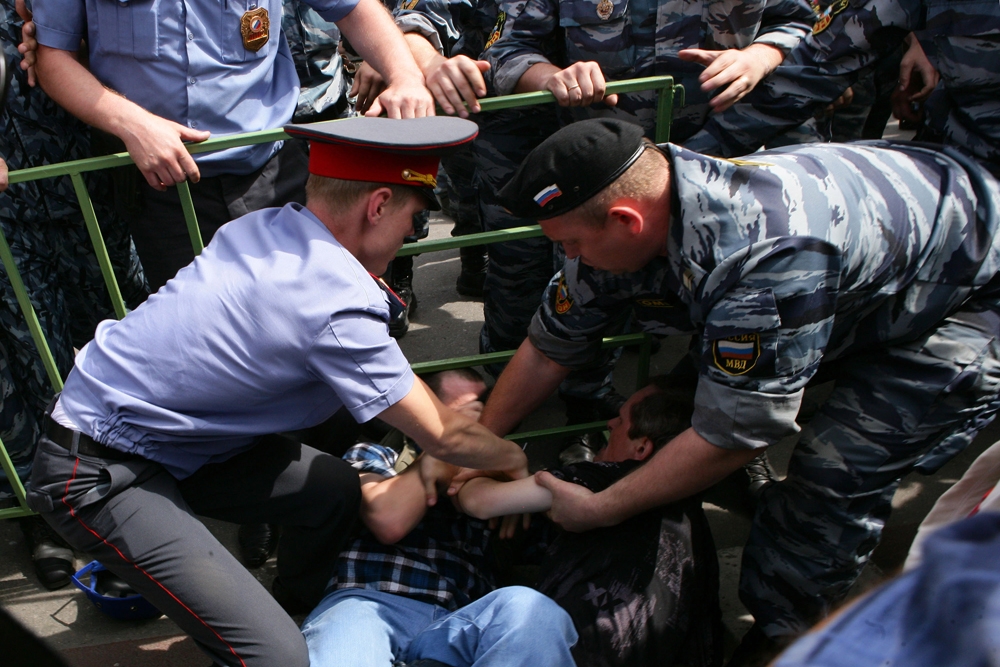 Is this the direction Kyrgyzstan is heading? (Photo: Dmitry Beliakov/Bloomberg)

In early 2013, shortly after the Russian Duma approved a bill outlawing what Russian officials described as "homosexual propaganda," I spent several weeks in Bishkek interviewing local LGBT and human rights activists. The aim was to discern how Kyrgyzstan had emerged as a bright spot for LGBT activism in a region well-known for intolerance of homosexuality and gender variance.

At that time, no one could claim that Kyrgyzstan was even marginally gay-friendly. But several NGOs and initiative groups were able to work openly to provide services to LGBT people and advocate for their rights. And there was optimism that, little by little, the situation was improving thanks to sustained advocacy work. Indeed, even some officials had actively engaged with LGBT issues in recent years: in 2012, for example, then Human Rights Ombudsman Tursunbek Akun mentioned LGBT rights in his annual report.

Yet while undoubtedly there were achievements to celebrate during our interviews, developments in Russia and the prospect of an "anti-gay" law there darkened the mood. Asked if they thought a similar law could emerge in this former Soviet republic, almost everyone agreed that it was entirely possible or even likely, especially given Kyrgyzstan's tendency to copy Russia, at times to the letter in the case of legislation. The difference, activists argued, would be that if such a bill was introduced, it might be possible to prevent its passage due to Kyrgyzstan's robust civil society and the ability of donors to persuade the government. No one was under any illusions that it would not be a hard fight, but there was cautious optimism.

Fast-forward eighteen months and that optimism is being sorely tested. The fierce official backlash that followed the January 2014 release of Human Rights Watch's report on police violence against gay and bisexual men showed that government hostility towards LGBT people was growing fast.

Then, in March, the trend was confirmed when lawmakers announced a vague bill to outlaw "the formation of a positive attitude towards non-traditional sexual relations.” Despite organized campaigning, and the bill’s brief withdrawal under international pressure, it has steadily moved through committees over the last four months. In the first of three readings, on October 15 parliament approved the legislation by a vote of 79 to 7. President Almazbek Atambayev has said nothing to indicate he will not sign it.

Aside from considering what the bill will mean for LGBT activism in Kyrgyzstan if it passes, a key question is how did the climate for LGBT activism shift so rapidly? Is this just a straightforward case of Russia exporting its highly conservative brand of "traditional values" to a country that cannot afford to say no? The circumstantial evidence certainly supports that view. Even the most skeptical analyst would find it impossible not to conclude that Russia provided the inspiration for the current bill, while many commentators argue persuasively that Moscow has effectively leveraged Kyrgyzstan's chronic financial and energy woes to force the government to toe the Kremlin line.

However, as with so many analyses of Central Asia, such conclusions focus on geopolitics at the expense of local factors. Even if Russia has provided the initial spark, local socio-political dynamics are providing much of the oxygen needed to fuel the fire. Central here are debates over national identity in Kyrgyzstan, which have been particularly emotive since communal violence between Kyrgyz and Uzbeks in 2010. Meaningful reconciliation has been elusive, not least due to continued nationalistic rhetoric from some officials.

Spurred on by the belief that the international community unfairly blamed ethnic Kyrgyz for the bloodshed in Osh, the tone of debate has become increasingly anti-Western, with "the West" coming to be perceived as a threat to the country’s security and sovereignty. In addition to the current anti-gay bill, that logic has also led to calls for restrictions on NGOs in order to prevent "foreign agents" from sabotaging Kyrgyzstan.

Within that context, LGBT people find themselves at the center of a perfect storm of populism, nationalism and geopolitics. A common perception is that homosexuality is a perversion of Western origin at odds with local values and identities, with many arguing that there is no such thing as a gay, lesbian or transgender Kyrgyz. As a result, explained one activist, LGBT activism is often popularly viewed as something that must be actively resisted, since it involves the imposition of foreign norms by an aggressive group of morally corrupt deviants demanding "special rights" to violate local values.

Politicians have been quick to capitalize, recognizing that targeting LGBT people boosts approval ratings and distracts from other problems, while pleasing the Kremlin. While undoubtedly taking inspiration from Russia, Kyrgyz lawmakers have made the bill their own as a putative defense of Kyrgyz identity and values, going considerably beyond the scope of the Russian law and proposing even harsher penalties.

The rise of what scholars Michael Bosia and Meredith Weiss describe as "political homophobia" is a worrying development with often violent consequences. However, there is also a certain irony that in seeking to prohibit discussion of homosexuality, there is now more discussion of it in Kyrgyzstan than ever before. One activist observed recently, "Thank you to the deputies who created such a powerful news story. Previously they said there were not any gays in Kyrgyzstan, but now they are openly acknowledging that there are LGBT people everywhere.”

“This is the best propaganda that has ever been done – FREE – in Kyrgyzstan's entire history,” the activist continued. “Moreover, they have helped focus the attention of the international community on LGBT people, as well as helping consolidate and mobilize the LGBT community."

This is undoubtedly an optimistic take on recent events, especially as the international and local response has been limited at best. Yet it also points to the reality that attempting to legislate LGBT people out of existence can backfire. That is something Kyrgyzstan's politicians might reflect upon if they wish to avoid inflicting further harm on the country's already tarnished reputation.

Cai Wilkinson is a lecturer in International Relations at Deakin University, Australia. Wilkinson’s research in Central Asia has focused on the LGBT community.