Like many of Kyrgyzstan’s ills, the bad air too is partly rooted in the country’s culture of corruption. 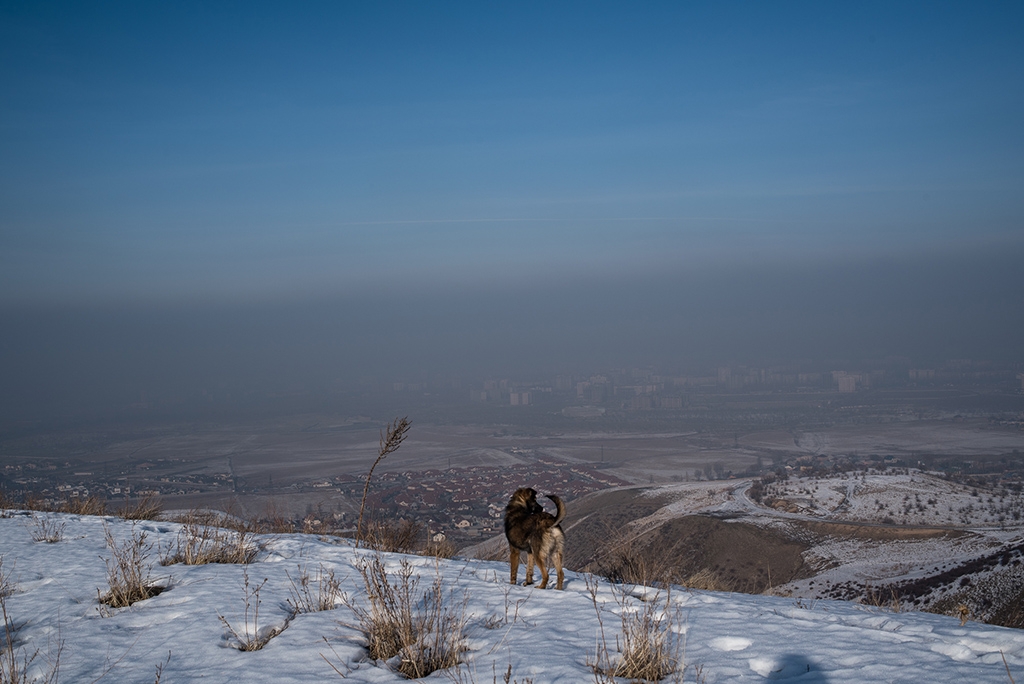 Kyrgyzstan scrapped mandatory routine inspections for cars in 2012 – ostensibly because the tests were an incentive to bribe – so there is no way of enforcing even basic emissions requirements. (photo by Danil Usmanov)

It has become an annual routine. As soon as the heating season begins, a pall of grimy black smog descends onto Kyrgyzstan’s capital, Bishkek.

There is no shortage of theories for the cause. Some pin the blame on the half million or so cars circulating in Bishkek. Others think the recently overhauled, coal-fired power plant is at fault. Perhaps the most commonly cited contributing factor, however, is the method used by many of the city’s harder-up residents to heat their homes.

Taalaibek Kulushev, 45, lives in southwest Bishkek with his wife and two daughters. They moved to the capital from the mountainous Naryn region in search of work. The area in which they live, an agglomeration of one-story houses, is not attached to the gas grid and electricity provision is patchy. To keep warm, they rely on a coal stove, into which they shovel four tons of fuel over the winter.

“The electricity at home is very weak and the lightbulbs keep flickering. It is not only that we do not have enough power for heating, we cannot even keep the stove going. We do not have gas yet, so we burn coal,” Kulushev said.

Kulushev admits that some in the neighborhood save money by throwing in all kinds of waste together with the coal.

"At eight o'clock, there is just an unbearable smell as people arrive from work and start to heat their houses. Some burn plastic and breathing becomes very hard. If you spit, your saliva comes out dark," he said.

When the weather is warm, Kulushev works on construction sites. In winter, the family lives off the salary of his wife, a nurse.

“There is not enough money to go around. We have to economize. Even the neighbors burn whatever they can afford,” he said.

According to a study by the Center for Environment and Development at Bishkek’s American University of Central Asia, or AUCA, coal consumption is increasing with every passing year. About 40 percent of urban populations in Kyrgyzstan still use coal for heating.

Plastic, car tires and even offcuts from sewing factories are burned, despite emitting highly toxic fumes. Complaining about neighbors is still considered a social taboo in Kyrgyzstan, so the practice persists.

As the head of the sanitary and environmental inspection department of Bishkek city hall explained, most of that unlawful behavior takes place at night, when his department has no staff working.

"The mayor's office has allocated us a certain budget, but it is not enough for our people to work at night. They do not even get money for petrol so that they can conduct inspections," Kerimbay Choibekov said.

The city environmental oversight department is slated to get funding to operate at night from next year. As it is, the department detected 453 violations from May to November this year, raising almost $60,000 in fines.

As for enterprises, at the start of this year the government introduced a moratorium on inspections. City hall can only pay visits on companies suspected of violating environmental standards in the event that they receive a formal complaint from a member of the public.

The fines have had some effect, Choibekov said. Many public baths that kept their stoves going by throwing tires into the fire stopped doing so after being fined, he said.

Rakhat Sabyrbekov, who heads AUCA’s Center for Environment and Development, is concerned by the sheer volume of cars in Bishkek, which he said exceeds the advisable number tenfold. More than 90 percent of those cars are over 10 years old and do not meet modern environmental standards, he said.

Like many of Kyrgyzstan’s ills, this too appears to be partly rooted in corruption. As environmental engineer Baktygul Stakeyeva explained, automobile fuel is often smuggled and has not undergone checks to ensure it complies with official standards.

“Employees at gas stations admit that even gasoline that has not been brought in as contraband is quite low-quality,” Stakeyeva said. “It is not just the age of the cars that plays a role here, but also the quality of the gasoline.”

Just to make matters worse, used car traders often saw off the catalytic convertors from the automobiles they import into the country. This component does an important job limiting the volume of contaminants pumped into the atmosphere, but buyers can be discouraged by the hassle and cost of maintenance. Mandatory routine inspections for noncommercial vehicles were scrapped in 2012 – ostensibly because the tests were an incentive to bribe – so there is no way of enforcing even basic emissions requirements.

"Even people who drive with catalytic convertors have to remove them after a while because they get clogged up, precisely because of the poor-quality gasoline," Stakeyeva said.

Professor Rustam Tuvashin, a specialist in pathophysiology, has been studying the effects of smog on human health since 2001. He said that even when he started out air pollution levels in Bishkek were above the norm.

“As an experiment, we created lab conditions to mimic the intersection of Chui and Manas,” Tuvashin said, naming a central location in Bishkek. “Rabbits would be kept there for periods of six or seven hours, and a large percentage had offspring with birth defects.”

For all this, many Bishkek residents appear sanguine about the dangers posed by smog. Akylai Kudasheva, who lives in a southwestern neighborhood, said her neighbors are eagerly awaiting the moment they are connected to the gas grid.

"If you don't keep an eye on the stove, it quickly goes out. So as not to have to monitor it constantly, it would be good to have gas heating. We are very much waiting for it, and they have promised we will have it by 2020," Kudasheva said.

The authorities believe their plan to extend gas pipes into 47 residential areas of Bishkek will go a long way toward solving the smog problem.

Maksat Omurov, head of the environmental security directorate at the State Ecological Inspection Service, said the problem of smog has only really got onto the radar of officials in the last two or three years. The government is now making more of an effort to reach out to environmentalists and hold public discussions on the issue, he said.

In the meantime, Bishkek residents are left just with advice on how to cope with the worst bouts of bad air.

The only fix, said Tuvashin, the professor, is to leave town every weekend to clean out one’s lungs and to wear masks when the pollution gets really bad.