It is clear from a welter of circumstantial evidence that official death figures are massive undercounts. 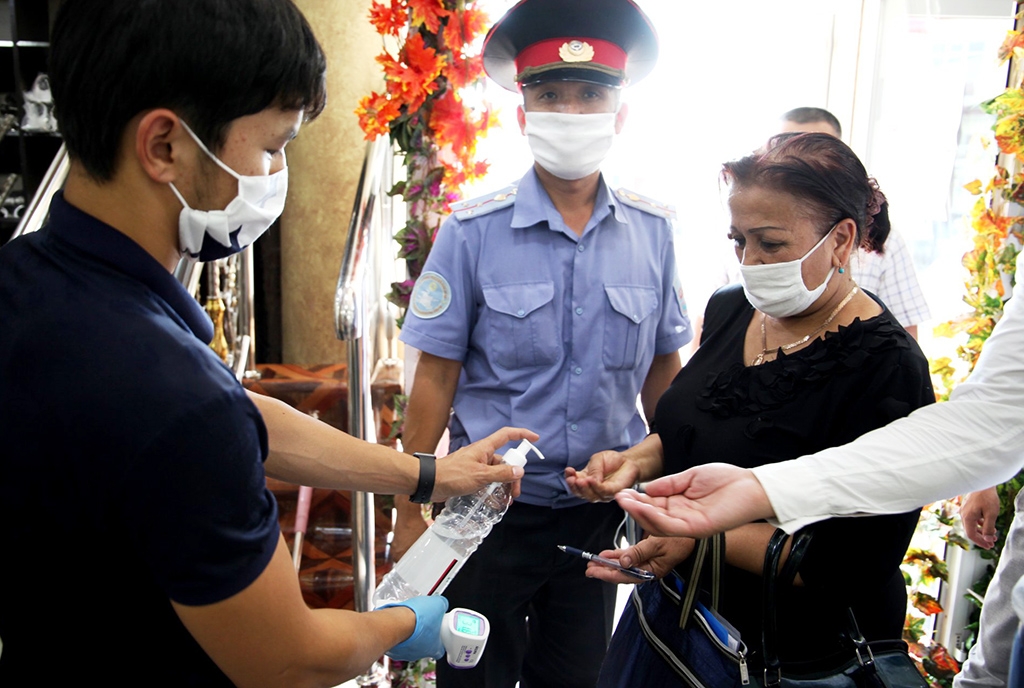 Coronavirus infections are on a steep incline in Kyrgyzstan, but that is only part of the picture. More and more people are dying with pneumonia, sometimes in the street. (Osh mayor's office)

Doctors in Kyrgyzstan are describing their country’s epidemiological situation as “hellish.”

Coronavirus infections are on a steep incline, but that is only part of the picture. More and more people are being diagnosed with pneumonia, a condition often associated with COVID-19. In the 24-hour period up to July 3, 10 people were said by officials to have died with the coronavirus, and another 23 succumbed to community-acquired pneumonia.

Many are dying before they can even get to the hospital. On June 29, two people died of pneumonia at the entrance to Bishkek’s National Hospital.

Tilek Maratov, the director of the hospital, said the victims had arrived too late.

“They stayed at home for weeks, self-medicated, and this is the kind of result that leads to,” he said.

Given how packed the hospitals have become, however, self-medication is often the only available option. Social networks are full of people pleading to find ventilators, oxygen tanks and drugs. Hospitals turn away people who are not yet showing high temperatures.

“What does a person with confirmed COVID-19 have to do to get taken by a clinic?” writes one woman, apparently talking about a relative. “The doctors would not take them; they said the condition was only moderately serious. State facilities are overfull. Maybe a private clinic?”

The latest overall tally indicates that 76 people have died with the coronavirus and another 120 with pneumonia over the duration of the crisis, which began in March. But it is clear from a welter of circumstantial evidence that these figures are massive undercounts.

Urgent work is focusing on expanding the number of available beds. The premises of the former U.S. air base at Manas are being overhauled and equipped with 600 beds.

“We are going to enlist senior students of medical faculties, as well as residents and interns. We are bringing about 100 health workers from regions with a favorable epidemiological situation to Bishkek,” Boronov said.

Bishkek medical workers are complaining they simply do not have the manpower to physically respond to all the incoming phone calls for help. The 118 number that previously served as the contact for arranging a COVID-19 test has been reformatted as a self-diagnosis service.

“Even if 100-200 ambulances suddenly appeared, we would have nobody to drive them. We have no doctors. We are short of them everywhere – in the polyclinics and in the hospitals,” Yegor Borisov, head of the intensive care unit at Bishkek’s Emergency Medicine Center, wrote on Twitter.

Borisov described the coronavirus outbreak as the “beginning of hell.”

Asked by somebody what help they could offer to mitigate the crisis, Borisov said simply: “Don’t get sick.”

The authorities are negotiating with the Russian government to bring in qualified personnel. Doctors from China and Poland had previously offered assistance.

The situation is also growing desperate in Osh, the country’s second city. Talant Arstankulov, the director of the Osh Interregional Joint Clinical Hospital, told Kaktus website that an additional 25-30 beds have been prepped at his facility, but that they will not be enough.

A tent camp has been set up on the outskirts of the city.

“It has 165 places for people to be put under observation, and another 80 beds for hospitalizing patients. Six tents have been allocated for doctors,” Nurlan Baimuratov, director of the Emergency Service Ministry in Osh, told Kaktus.

To try and mitigate the situation, health workers have created a number of channels on the Telegram messaging app to conduct online consultations. One channel has accumulated 100,000 subscribers.

As for adopting measures to stem the spread of the outbreak, the authorities are pleading helplessness. Boronov said the country simply cannot afford the economic cost of a new round of lockdowns. This year’s budget deficit has already reached 30 billion som ($381 million) – a colossal number for Kyrgyzstan.

In order to cover the cost of making welfare payments, the government is having to fall back on what is being given by donors. Out of a total $645 million pledged, however, only $291 million has been received, Boronov said. The government has promised to ensure expenditure is closely monitored and that they avoid the waste of funds.

But investigative journalists say they have found evidence, by poring through public procurement contracts from January to May, that personal protective equipment is being purchased at inflated prices.

The website Politklinika has maintained, for example, that protective suits were bought for 6,000 som ($76), when they are available at 2,000 som ($25) on the open market. A similar dynamic was noted with masks and ventilators.

“When we analyzed data on the website of the Public Procurement Department, we found out that sometimes [the amount paid for procurement] exceeded the market value of the goods by 10 times,” the website alleged.

Politklinika said, furthermore, that 48 percent of the companies winning contracts were mainly involved in construction and had no background in medical supplies.

Boronov, meanwhile, has appealed to the public to keep their spirits high.

“We should not worry people by publishing unverified information. And let's share good news. Let each of us come up with something positive every day and share it with the population,” he said.