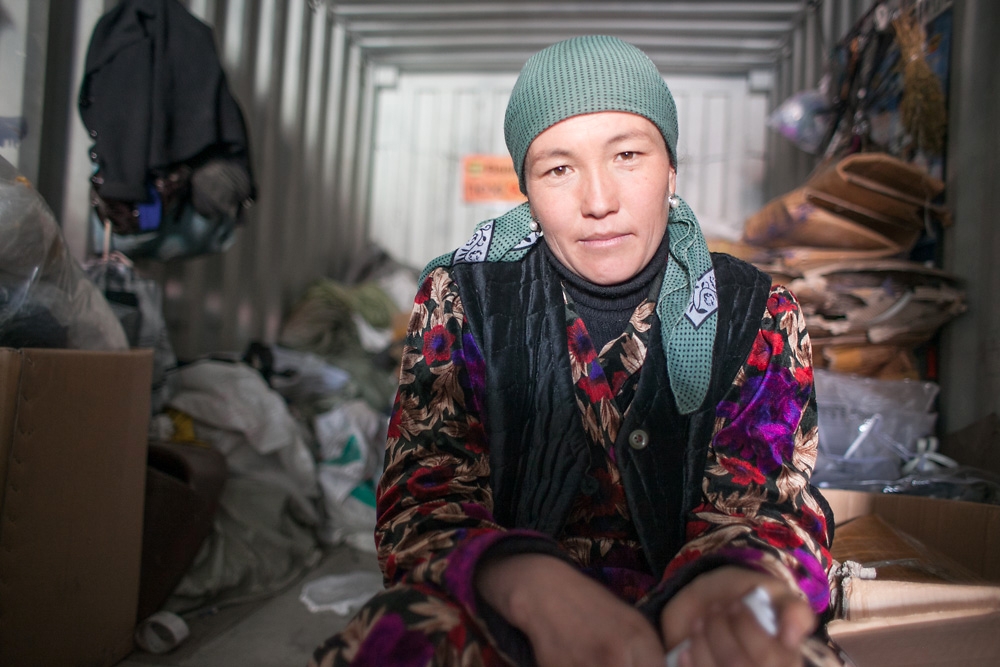 Waiting for customers at the Dordoi bazaar. (Photo: David Trilling)

Kelechek, a dusty new settlement on the fringes of Central Asia’s largest bazaar, is brimming with doubt. The village’s name means “future” in Kyrgyz, but residents aren’t sure it has one.

As Russia strives to consolidate its economic union in formerly Soviet territories, the sprawling Dordoi Bazaar not far from the village is experiencing dark days. “If Dordoi dies, Kelechek migrates to Moscow,” says Tursun Melisov, a 32-year-old porter at the sprawling bazaar. “It has already started.” Even as this latest wave of labor migration gets underway, approximately 1 million Kyrgyz are working abroad.

Dordoi is still full of locals stocking up on cheap goods from China and elsewhere. But supplying domestic consumers has never been Dordoi’s central purpose. The real money is in re-export. In 2009, the World Bank referred to Dordoi as “a state within a state,” calculating its annual turnover at over $2.9 billion, mostly goods transiting from China for re-export to Kyrgyzstan’s neighbors.

That was the year before Russia, Kazakhstan and Belarus formed their Customs Union and the Kazakh border only a few kilometers from Dordoi was lined with sharp rings of concertina wire.

Some sellers estimate re-exports have dropped 90 percent since the creation of the bloc. That’s led the Dordoi Association – the group of owners once staunchly against Kyrgyzstan joining – to reverse its position and demand immediate accession into the Customs Union, which will become the Eurasian Economic Union (EEU) in January.

Back in 2011, Dordoi Association President Askar Salymbekov told local media that entering the Customs Union would begin “a chain of bankruptcy” at Dordoi, affecting everyone from re-export businesses to porters like Melisov. The bazaar’s model was based on generating profits from the difference between Kyrgyzstan’s low customs fees on goods from China, and those imposed by Kazakhstan and Russia, he explained. If Kyrgyzstan enforced higher taxes on these imports – a requirement for Customs Union membership – Dordoi’s competitive advantage would be lost.

But as the Customs Union has enforced its own stringent import regulations – underscored by the concertina wire – Kyrgyzstan has been left in the middle.

“Re-export has dried up. Almost no one is coming from Kazakhstan,” Melisov, the porter, says. He used to work 18 hours a day ferrying goods from the bazaar’s containers to Kazakhstan- and Russia-bound trucks. More recently, he says his work has fallen by half: he now earns about $5-10 a day.

Kyrgyz leaders appeared to have Dordoi and the country’s main southern bazaar, Kara-Suu, in mind last year when they requested trade concessions on over 1,000 goods in their negotiations to join the Customs Union. Russia mostly ignored those demands although Economics Minister Temir Sariev boasted on May 30 that he had secured $1.2 billion in Russian loans and grants following a meeting of the Eurasian Economic Council in Astana. The money is designed to help Kyrgyzstan prepare for integration into the Russia-led EEU and restructure its economy away from the re-export model that benefited the likes of Kara-Suu and Dordoi, Sariev said. Moscow has not yet commented on the claim.

Meanwhile, the market is hurting financially, according to Damira Dootalieva, who heads Dordoi’s trade union. Traders at Kara-Suu market near Osh in southern Kyrgyzstan are also struggling due to long-term trade restrictions on the Uzbek border that began in 2010.

Dootalieva, who estimates 60,000 people currently work at Dordoi, says her union has forced owners of the bazaar’s iconic steel shipping containers – which serve simultaneously as shops and storage units – to dramatically decrease rental costs. “In the days of [ousted and allegedly corrupt President Kurmanbek] Bakiyev, Dordoi was a sanctuary for small and medium-sized enterprises trying to escape government corruption,” she says. “In the last five months trade has almost stopped completely,” she explains, citing even tougher controls at the Kazakh border that took hold this year.

Dootalieva is upbeat about the bazaar’s future inside the Customs Union, arguing that Kyrgyzstan can become a “sewing machine for Central Asia” with local textile producers accessing the Kazakh and Russian markets via Dordoi. But she admits she cannot speak for what she estimates is 30 percent of the bazaar, including the so-called “Chinese market,” Zhongai, where Chinese and Kyrgyz traders sell cheap goods from Asia to Kyrgyzstani consumers. “They are fighting to keep Dordoi outside the Customs Union and orient completely towards the local market, but Dordoi has to be international.” The days of re-export, Dootalieva says, are over.

Elmira Nogoibaeva, director of Polis Asia, a think-tank in Bishkek, says the 180-degree shift of Dordoi traders to supporting EEU membership underscores the uncertainty surrounding the debate in Kyrgyzstan. “One day people hear it [the EEU] is an economic panacea, the next a political attempt to recreate the Soviet Union,” Nogoibaeva says.

Support from Moscow – the $1.2 billion promised by Economics Minister Sariev – is another uncertainty. “Nothing has been confirmed in writing,” Nogoibaeva says. The authorities are putting a positive spin on entry as public debate intensifies, she explains, and President Almazbek Atambayev talks up the possibility of membership as early as autumn.

Regardless of how the EEU debate turns out, mitigating the commercial consequences at Dordoi will be a priority for the government. “It is tempting to think of Dordoi as a place, but it is really a whole sector of the economy. It has to be handled incredibly delicately,” says Nogoibaeva.