Kyrgyzstan’s farming puzzle: A rich nation reliant on others

Agriculture accounts for 15 percent of the Kyrgyz economy. Yet the lack of coordination means many farmers are barely able to survive, let alone export anything. 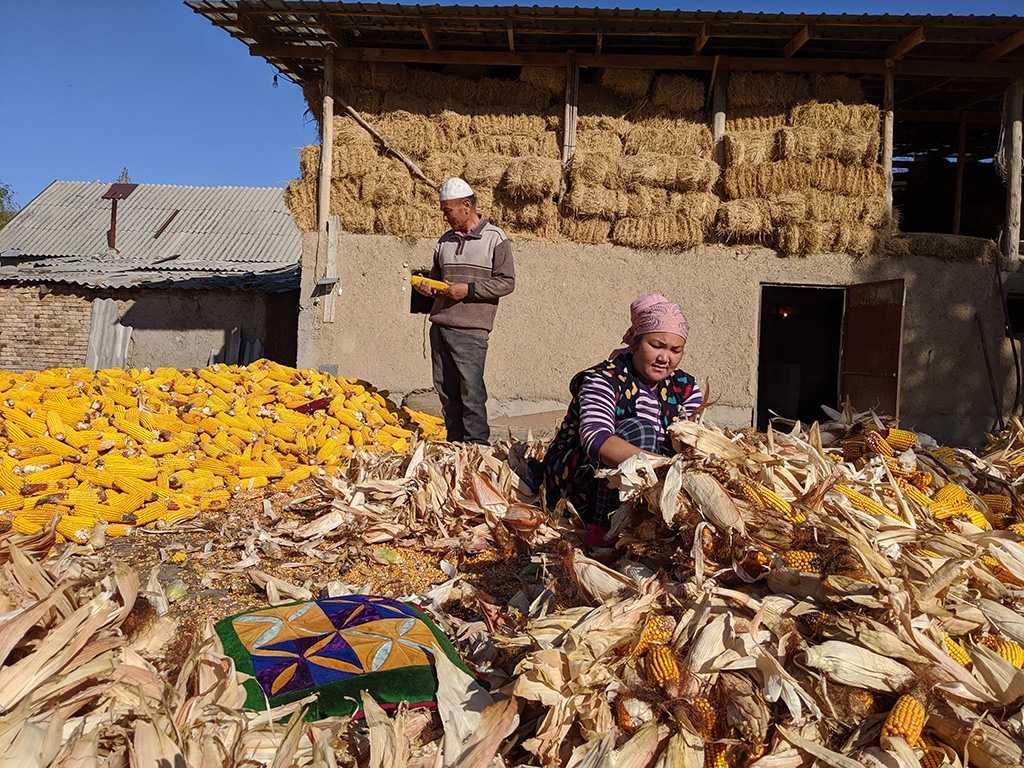 A tough blow for a small-time rancher. And yet, nothing exceptional for Kyrgyzstan, where almost all farms operate on a miniscule scale and where authorities are often unable to give a helping hand.

The government’s critics complain that the lack of broad strategic vision for agriculture is leaving rural communities at the mercy of such calamities. If they are lucky, families make enough money to keep afloat, but notions of getting goods to foreign markets are a distant dream for most.

Tologonova, 60, has spent 35 years working the land in Spartak, a village about 90 minutes northwest of the capital, Bishkek. The kind of labor she does is usually performed by men, which is how she earned the nickname “Iron Lady.”

Together with her youngest son Nursultan, 27, Tologonova supervises the 10 hectares of land from which the family gets the crops to feed their 200 sheep, 15 horses and the four surviving cows.

The day starts at 5:30 a.m., when Tologonova goes out to milk the cows. A little later, a buyer comes to pick up the milk, paying 17 soms ($0.24) per liter. The milk then gets taken to a dairy processing facility in nearby Belovodsk.

Others in Spartak lost cows too.

“In the field where the cows grazed, we got cattle ticks which then multiplied. We gave them injections and fed them medicine with droppers, but in the end many cows died,” said Tologonova.

Tologonova turned to the local grazing committee for help disinfesting the fields. Farmers pay this state-run body dues, and for that they expect some assistance in moments of crisis. But officials shrugged their shoulders, insisting they could not afford it, Tologonova said.

“The money we give them goes toward covering their salaries and keeping the office going. But when we ask them to solve some problem with sick cows, they just say they have no money,” she said.

Spartak, a village of around 2,000 people, is notionally in an ideal spot. A glance at the map shows it is set within an expanse of arable fields and surrounded by sources of water.

But Nursultan, who oversees the fields where the family grows its barley, wheat and corn, explained that the irrigation system is a mess.

Many of the flumes carrying water among the fields are broken and have only recently been partially repaired. Another problem is that the local authorities have not established an irrigation roster. This creates situations in which some farmers stem water flows at will as they irrigate their own fields, thereby depriving others at times of need.

The transition from the hyper-planning of Soviet times to the uncertainty of the free market has caused more headaches. At times, farmers simply do not have a sense of what they should be growing, and whether there are enough resources to nourish a given crop.

“It would also be good if every year, somebody would, on behalf of the ayil okmotu [village council], give us advice on which crops to sow. Recently, farmers in a neighboring village planted too much corn, but there was not enough water for irrigation, so a lot of it has rotted,” Nursultan said.

Kyrgyzstan is still intensely agriculture-dependent and these problems affect a sizeable chunk of the population. The sector accounts for 15 percent of the economy, beaten out in importance only by the export of natural resources and remittances sent home by expatriate laborers.

In 2018, more than 480,000 able-bodied citizens of Kyrgyzstan were employed in agriculture. All but very small numbers of those people are engaged in small-scale farming.

Without the benefit of scale, what farmers sell is not competitively priced and is hard to export to markets, even within the Eurasian Economic Union, the Moscow-led trading bloc that Kyrgyzstan joined in 2015. 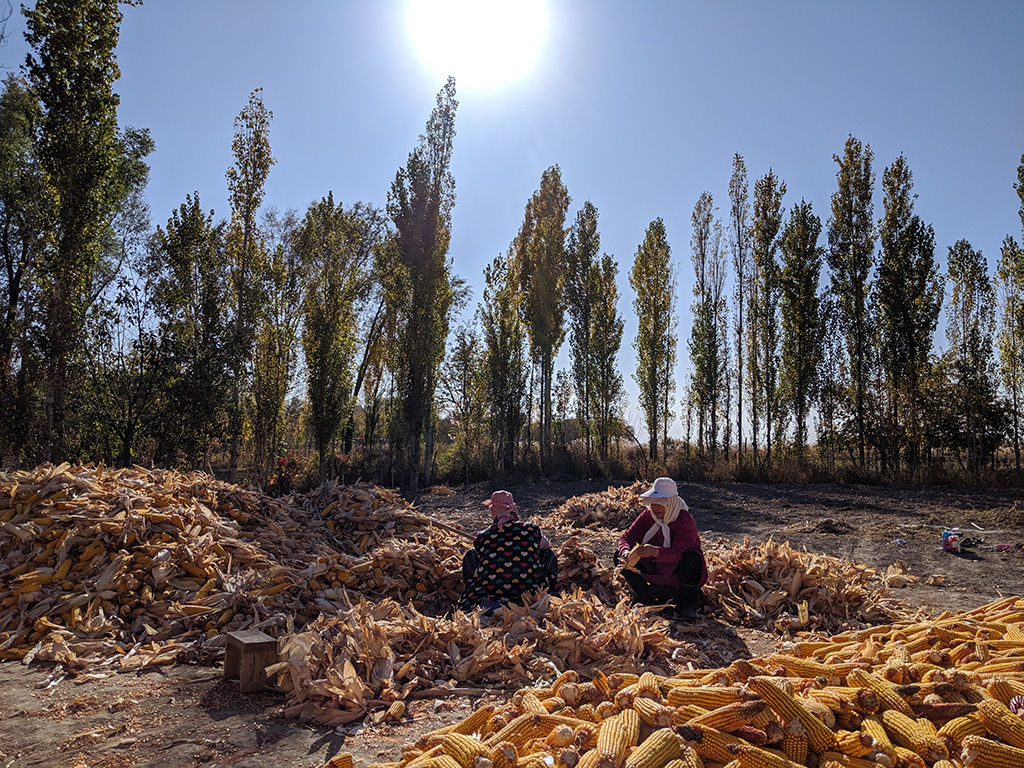 In an attempt to solve this problem, Temirbek Azhykulov created a lobbying organization called the Agricultural Complex Development Association. His goal is to pool the resources of anywhere between 50,000 and 100,000 farmers across the country.

Azhykulov told Eurasianet that the state currently expects individual farmers to be responsible for producing their goods and then finding a market for them. Instead, farmers should work in concert and offer their raw materials to local processing companies, he said. The government, meanwhile, should be busy trying to establish channels for export.

“When we go to market, the [processing companies] will bring the goods in tradable form. The farmer will not need to take the potatoes and transport them to Russia,” he said.

Upscaling will solve fundamental issues like irrigation, believes Azhykulov, who argues that Kyrgyzstan has more than enough resources to support profitable farming.

“Let’s say you take 100 hectares of land and 100 farmers sow 100 different crops there. Each crop has its own irrigation needs. One crop might need water every two or three days. Another one, 10 days,” said Azhykulov, outlining the kind of scenario that often leads to disagreement.

If farmers worked in concert, this could be fixed, he said.

“They say: ‘We do not have enough canals or water.’ But we have everything. What we lack is the brains to organize it all,” Azhykulov said.

The authorities do appear aware of the impasse. During a tête-à-tête with Agriculture Minister Erkinbek Choduyev in June, President Sooronbai Jeenbekov told the minister that his portfolio was not just to collate statistics but also to spearhead reforms.

Jeenbekov should have some insight. Prior to 2007, around the time he began his political ascent, he worked all his life in agriculture.

But the ministry’s work is satisfying neither farmers nor the business community.

Tilek Toktogaziyev, chief executive of the Nomad Greenhouse agricultural holding, grumbles that while Agriculture Ministry officials embark on trips abroad to meet with prospective investors, their efforts are unfocused and provide little by way of concrete results.

He cited the example of when Jeenbekov went to Switzerland in July and came away with documents on intentions to cooperate.

“They flew there, stayed in a hotel, they ate and ate, and that was all paid for out of the state budget. What did they get for all that? The president was just outright begging: "Please give us money." I was embarrassed. We need to tell them what opportunities we can offer,” Toktogaziyev said.

If Toktogaziyev sounds so critical, it is partly because he feels like he could do a better job. In May, he lobbied for the top job at the Agriculture Ministry, but he was snubbed in favor of Choduyev.

For Toktogaziyev, the stakes could not be higher. Cracking the agricultural puzzle would mean making the country stronger on the international stage too.

“We are very reliant [on others]. In order to fix this, we need to have a vision of how to achieve food security, and energy, economic, national security,” he said. “When a ship does not know where it is sailing, no wind is a good one.”