Kyrgyzstan’s goitered gazelles are back, but still vulnerable

Poaching and agriculture have driven the antelopes toward extinction. 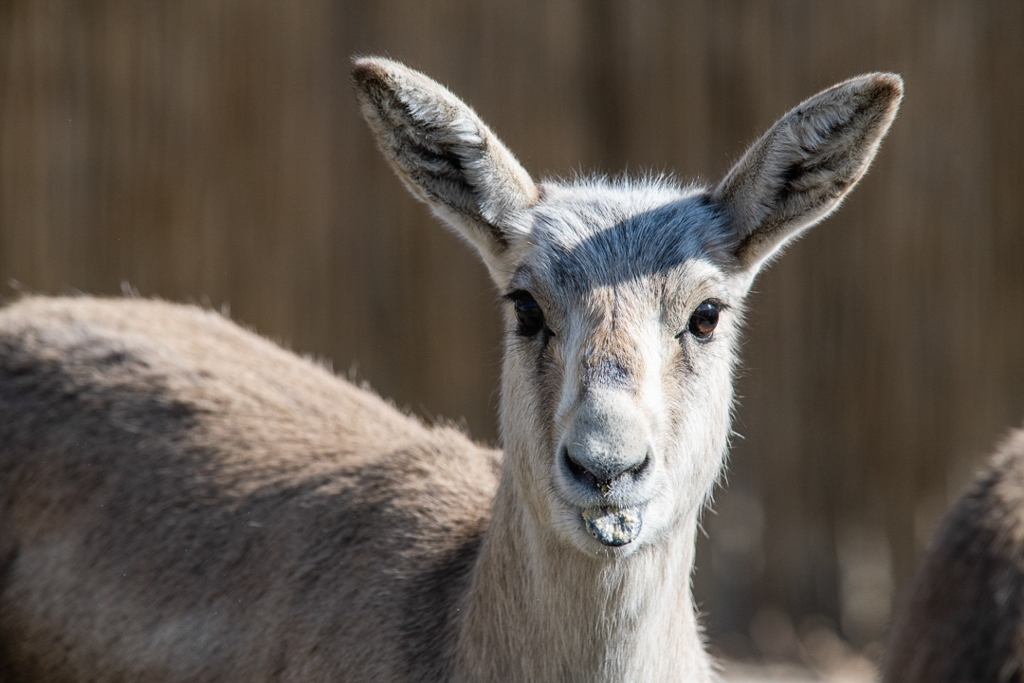 When Talapbek Akmatov was a small boy, his elders often spoke of the “black-tails” that used to pack the southern shore of Lake Issyk-Kul, the region where he was born.

He never saw one in the flesh. But now, at 51, Akmatov is part of a team overseeing the first reintroduction of a species into Kyrgyzstan since independence – those same black-tailed gazelles.

“It took them about 15 days to adapt [to their new surroundings]. They don’t like loud noises,” Akmatov said of the shy, skinny-limbed animals also known as goitered gazelles, whom he feeds twice a day at a small reservation in Issyk-Kul region’s Ton district. 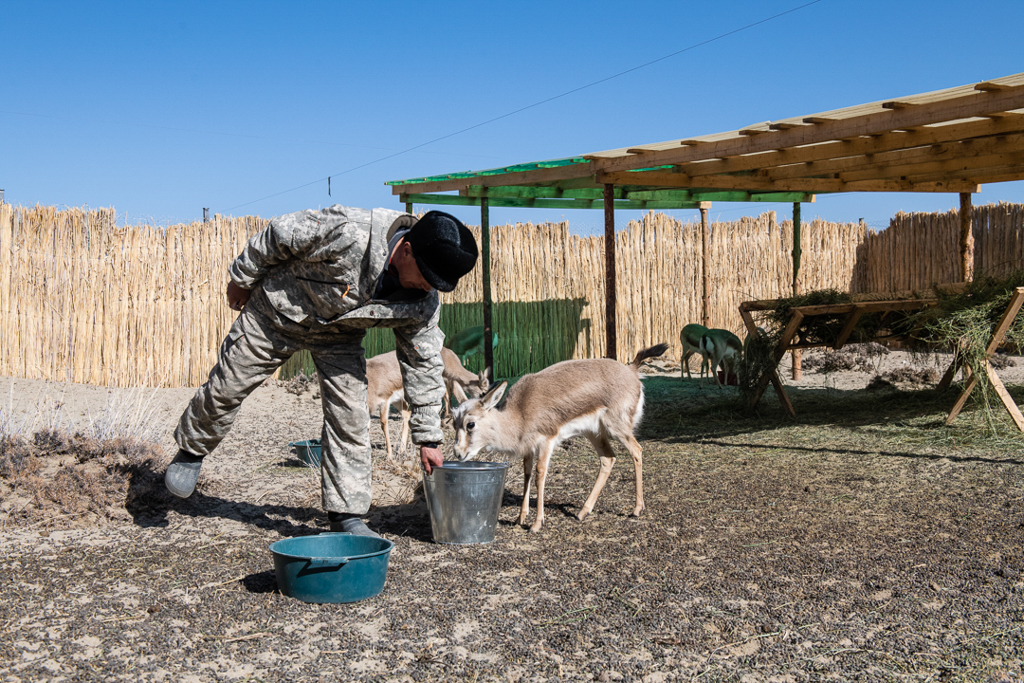 “Jackals and dogs from the neighboring village used to arrive and scare them so we stood watch.”

Every day after lunchtime, the animals run around “chaotically” for about half an hour, releasing the power in their hind limbs belied by their delicate appearance, Akmatov told Eurasianet correspondents who visited the gazelles’ new digs. 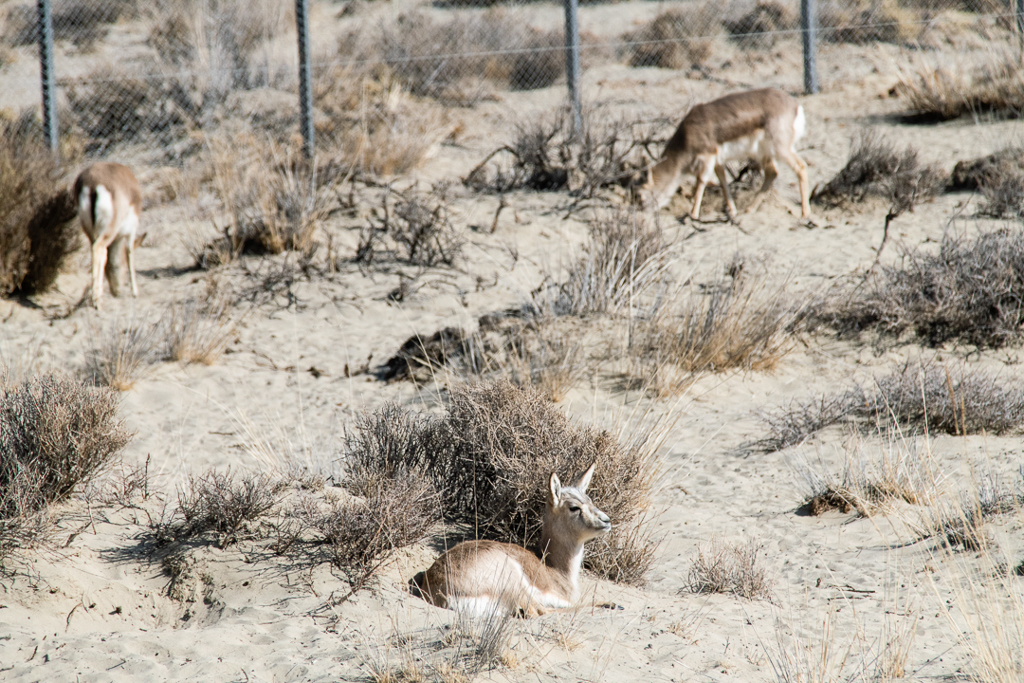 Populations of the goitered gazelle can be found as far west as Georgia, in the Caucasus, and as far east as China and Mongolia.

At the turn of the century, their global number was estimated between 120,000 and 140,000 by the International Union for Conservation of Nature (IUCN). It is thought to have fallen since.

In Kyrgyzstan, perennial poaching and the Soviet-era expansion of pastoral agriculture had all but eliminated this type of antelope by the end of the 1980s, the decade that saw the animals included in the country’s Red Book of endangered species for the first time.

While male gazelles grow extravagant, curved horns, they are not especially prized like those of the saiga antelope in Kazakhstan. 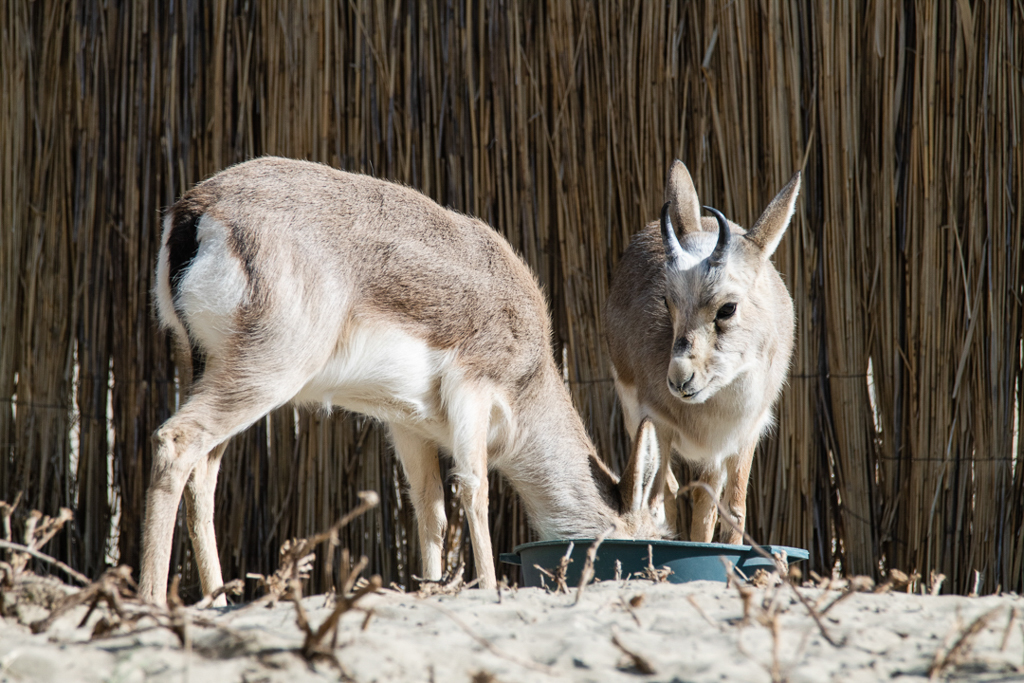 Instead, it is their high-quality meat that proved irresistible, first to local officials pressed to meet Soviet meat-production quotas, and later to a hard-up population with few alternative sources of income.

The fine imposed for killing a goitered gazelle under Kyrgyz legislation is around $10,000.

The 15 animals under the care of a local non-profit, Argali, were brought in a two-day truck ride from a reservation in Uzbekistan’s Bukhara region last October.

For their co-passenger, Argali director Askar Davletbakov, the casualty-free journey was the high point in what he describes as a lifelong mission to reintroduce the gazelles.

The biologist’s group, whose operations depend largely on a $50,000 grant from the United Nations Development Program, is now searching for funding to extend the conservation project. The plan is to begin releasing the animals into the wild in 2026.

The project has to date identified six areas in Issyk-Kul region where the goitered gazelle could run wild once more. 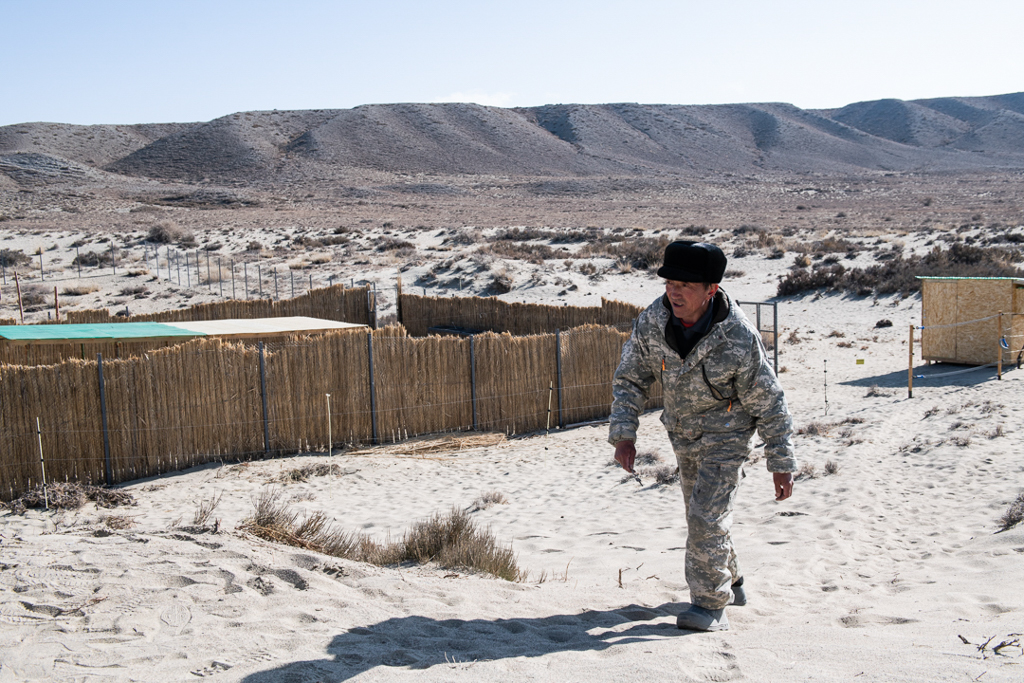 Kazakhstan would have been a more appropriate starting point for the reintroduction, Davletbakov told Eurasianet. Its Altyn-Emel National Park, which has a large gazelle population, is closer to Issyk-Kul in both distance and landscape than Bukhara. The goitered gazelle used to drift between the grasslands of the two countries before state borders hardened with independence.

There has been no agreement with the Kazakhs yet, Davletbakov said, but he hopes to bring some gazelles from that country to boost genetic diversity ahead of the reintroduction.

The gazelles’ journey from Bukhara was stressful.

An employee of the Uzbek reservation accompanied the animals in the back of the vehicle, administering massages as they bumped over mountain passes.

At the border, Kyrgyz customs passed the animals through quickly, as the team made it clear that they were weakening.

For the moment, Davletbakov is grateful that local authorities have not created any obstacles for the project, which is one of several powered by grassroots Kyrgyz conservation groups in partnership with foreign donors.

Elsewhere in Kyrgyzstan, a project to repopulate the southern Jalal-Abad region with Tian Shan maral deer raised in a reserve in the adjacent Naryn region has enjoyed success in recent years, attracting funding from a foundation set up by Hollywood actor Leonardo Di Caprio.

Yet another conservation win is just down the road from the gazelles, where activists have come together to re-establish a mini-nature reserve centered on a peninsula jutting into Lake Issyk-Kul. 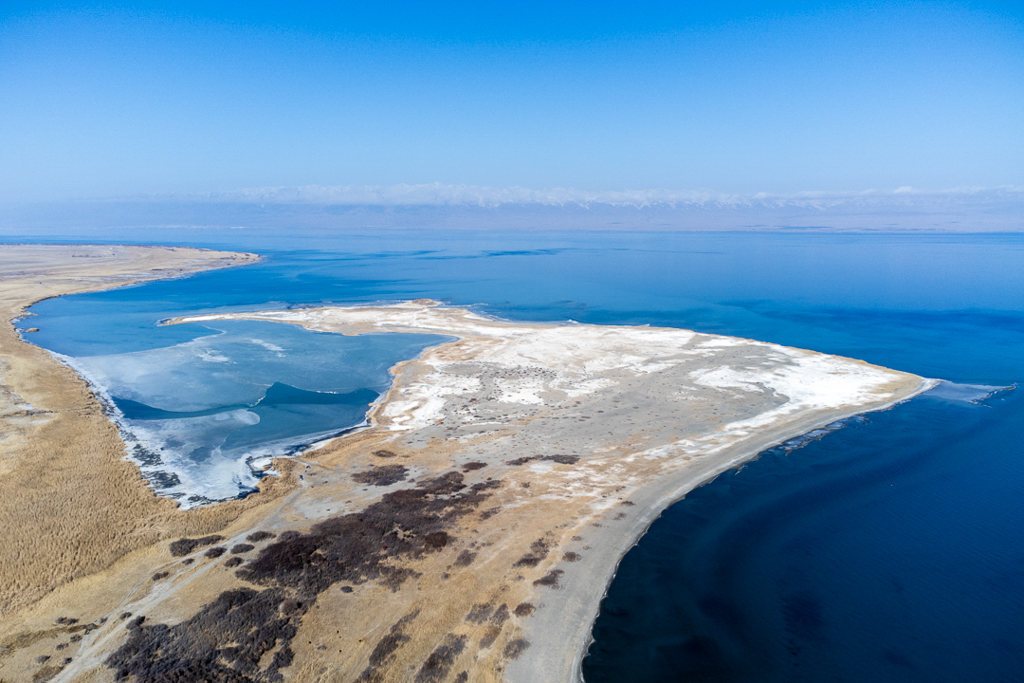 In the Soviet era, the peninsula was a traditional wetland along a migratory route for waterfowl, including some species listed in the Red Book. But the area lost its protected status during independence and became a playground for poachers, while more and more birds decided to circumnavigate the stop-off.

Now the area is full of birds once more, and has become a destination for paying eco-tourists, with bans on hunting and fishing strictly enforced. 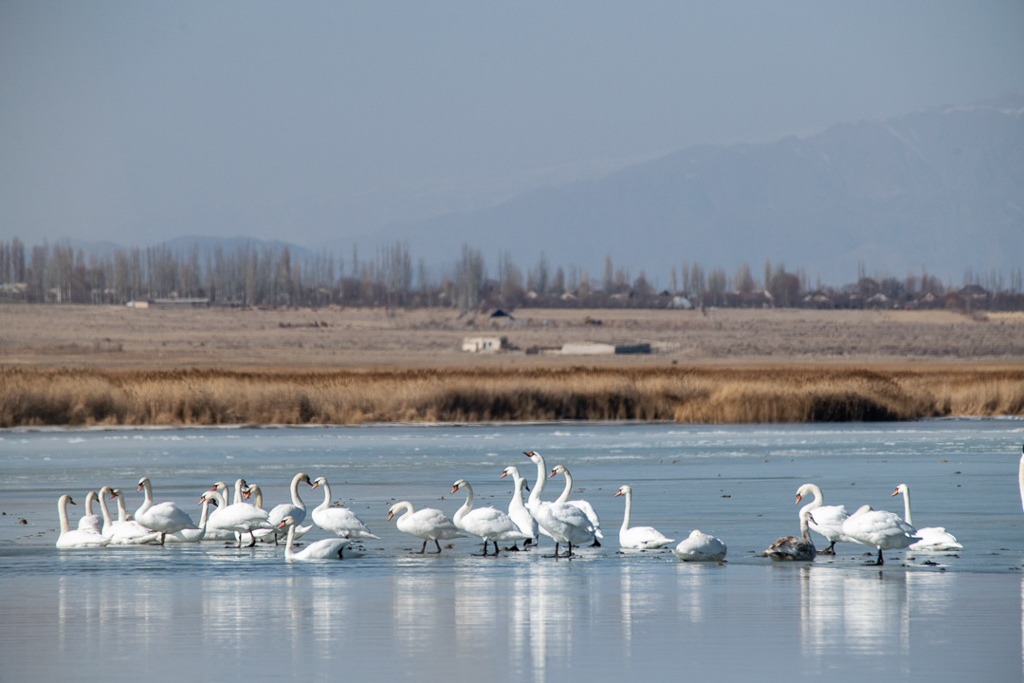 Whilst the infrastructure for the area was being built, local villagers guarded the area from all comers, project participants recall with pride.

Onsite, Eurasianet correspondents met two tenth graders who won the chance to be involved in the conservation effort through their successes in a poetry competition. 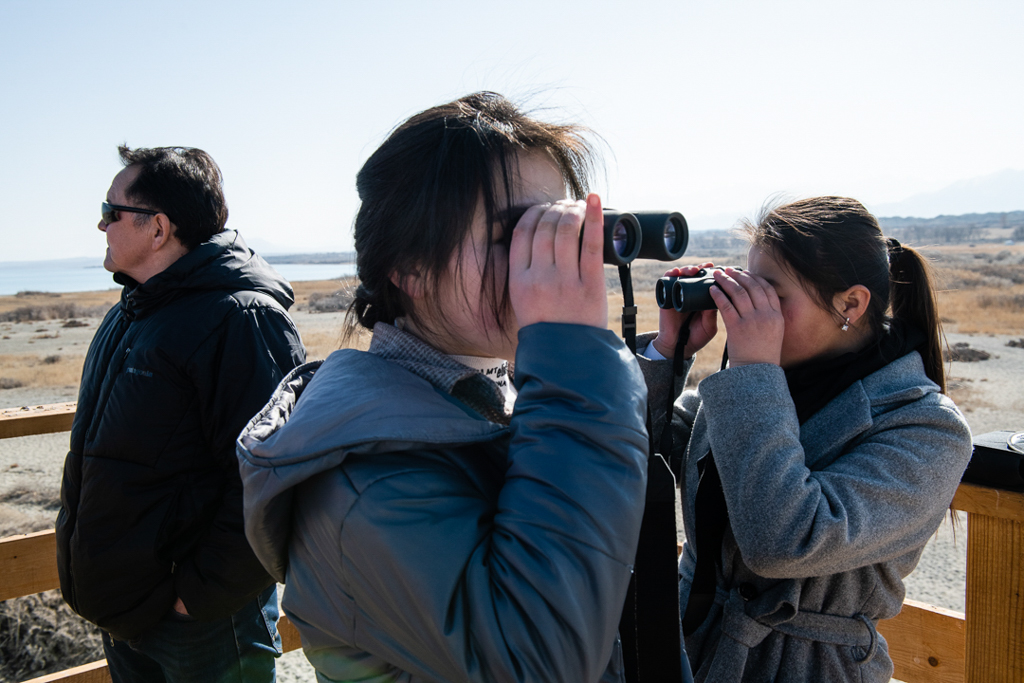 “Already we can tell some of the birds apart by their song, and by the prints that they leave in the sand,” said one of the binoculars-wielding schoolgirls, Fatima Tilekbekova.

Getting local buy-in to protect gazelles may be more difficult, since the economic incentives work in the other direction, warned Nurlan Mamyrov, a conservationist involved in both projects.

While Kyrgyz culture is traditionally reverent of wild animals – one Issyk-Kul sub-clan even takes its name from the gazelles – widespread poverty mean locals may be willing to risk the fines for a shot at the creatures.

“We need to work with local people to convince them that the gazelles are our heritage,” Mamyrov told Eurasianet.