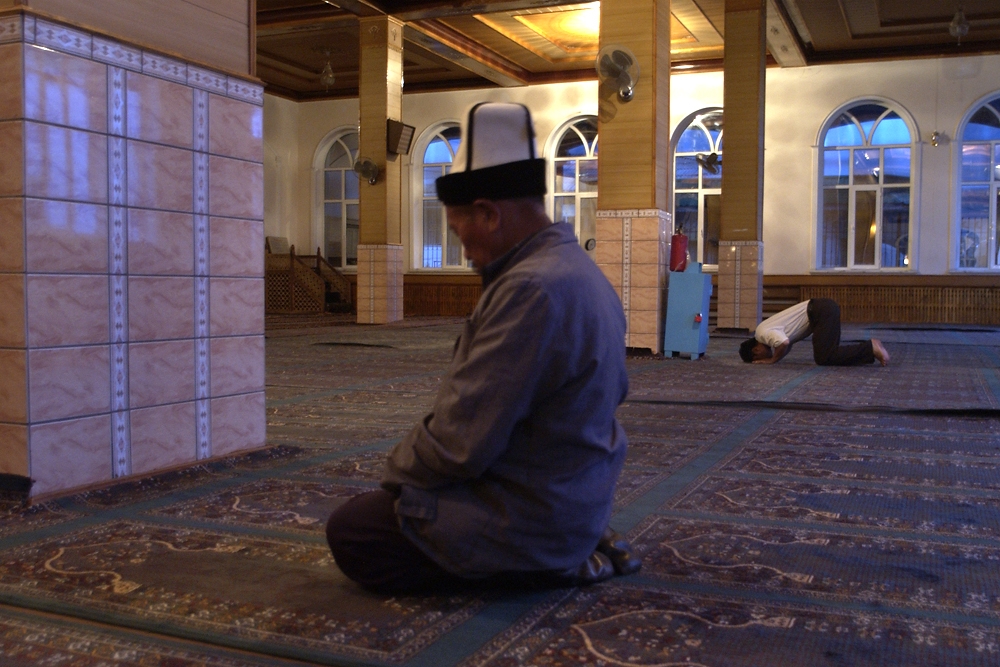 Kyrgyz men pray at a mosque in Osh in May 2006. Kyrgyz news media warn of a potential danger that Islamic extremists from Kyrgyzstan now fighting for the Islamic State of Iraq and Syria can return home and destabilize this Central Asian country. (Photo: Dean C.K. Cox)

Fears of militant Islam are nothing new in Kyrgyzstan. Over the past decade and a half, Kyrgyz media have warned about a progression of Islamic bogeymen posing a dire threat to the region – including the Taliban, the Islamic Movement of Uzbekistan and Hizb-ut-Tahrir. Now, there is supposedly a new threat that radiates from distant lands.

Verifiable facts are hard to come by when it comes to the IS as a potential threat in Central Asia. The number of IS fighters from Central Asia is thought to be growing. And anger with the region’s corrupt governments would seem to provide fertile soil for radicalism to flourish. That is prompting speculation about what will happen when battle-hardened fighters return home radicalized by the most vicious jihad movement in modern times.

It is a question many appear ready to answer, whether they have genuine insights or not. In Kyrgyzstan, a current scare can be traced back to comments made this summer by Kadyr Malikov, a prominent religious-affairs analyst in Bishkek. In a July 3 op-ed for AKIpress, Malikov warned that IS was targeting Central Asia and the region should “brace for upheaval.” Since then, Kyrgyz media have devoted countless column inches to hysterical handwringing.

Malikov added more intrigue to the craze on October 23. "Today, by various estimates, about 4,000 young people, men and women, from the Central Asian countries are already under the black banners of the IS, and the danger is growing of them spreading the IS ideology and being actively involved in radical attempts to install a caliphate once they are back in their home countries,” the Interfax news agency quoted him as saying.

Contacted by EurasiaNet.org, Malikov said he was misquoted, that he spoke of 2,000 Central Asian fighters, a number he says he gleaned from “Western experts” and his “sources in the Middle East.”

“But I admit that establishing the exact number of [Central Asian] fighters is almost impossible. I think that what's more important are not exact figures but the dynamic of growth: several months ago, there were no Kyrgyzstani fighters in Syria, but now the numbers are steadily increasing,” he told EurasiaNet.org on November 3.

Some observers wonder whether the doom-and-gloom media mongering makes evaluating the true nature of the threat more difficult.

“Such analysts have so much influence on media that whatever they say is believed and published without scrutiny. This is a very dangerous development that can mislead citizens,” said the member of a council that advises the president on social policy, speaking on condition of anonymity according to protocol. She expressed doubts about Malikov’s figures, and complained that he has complicated the task of responding rationally to the potential militant threat.

Unsurprisingly, the State Committee on National Security – known as the GKNB, the successor to the Soviet-era KGB – has connected IS to a threat that is closer geographically, the war in Afghanistan and Pakistan.

“Following NATO air strikes and the strengthening of attacks by Pakistan [on militants there], ISIS is seeking to fill its ranks and expand its operations by attracting extremist groups from Central Asia to jointly realize common interests,” Taalai Japarov, director of the GKNB’s Anti-Terrorist Center, told the Kyrgyz weekly Jany Agym on October 17. “Kyrgyzstani extremists will attempt to return home and hide their whereabouts. This by itself presents a danger. Already, the GKNB and Interior Ministry are uncovering dozens of extremist group members.”

Religious leaders complain the GKNB tactics are counterproductive, serving only to breed the kind of anger at authorities that encourages radicalization. An imam in a small town in Chui Province told EurasiaNet.org that under the pretext of fighting Islamic militants, security officials often extort money from ordinary believers.

“When they [GKNB] arrested my son [on charges of membership in a banned Islamic group], they told me that if I gave them $1,000, they would immediately release him,” said the imam, who withheld his name out of safety concerns. “After I saw that my son was tortured, I paid the money.”

Tales of corrupt security officials demanding bribes from practicing Muslims, with threats of incarceration or beatings, are not uncommon.

In the absence of credible information about the Islamic State, conspiracy theories flourish, with local media outlets often following Russia’s lead and blaming the West for just about every ill in society. “ISIS is a CIA creation to weaken the Muslim world and advance US interests,” a banker in Bishkek told EurasiaNet.org.

Addressing an October 22 panel on IS, Aman Saliev of the Bishkek Institute of Strategic Analysis and Forecast said the “overwhelming majority of Kyrgyz has no idea what ISIS is.”

The public debate about the IS menace has revealed divisions within government. “The threat that ISIS poses for our region and Kyrgyzstan is real, but its extent is sometimes exaggerated,” Zakir Chotaev, deputy director of the State Agency for Religious Affairs, told local media on October 18.

Malikov disagrees. “The threat is not exaggerated. In light of deep social discontent in all of the Central Asian republics and growing geopolitical rivalry in the region, the rise of radical Islamic ideas, such as establishing a caliphate, poses serious risks. It is like a virus,” he said.