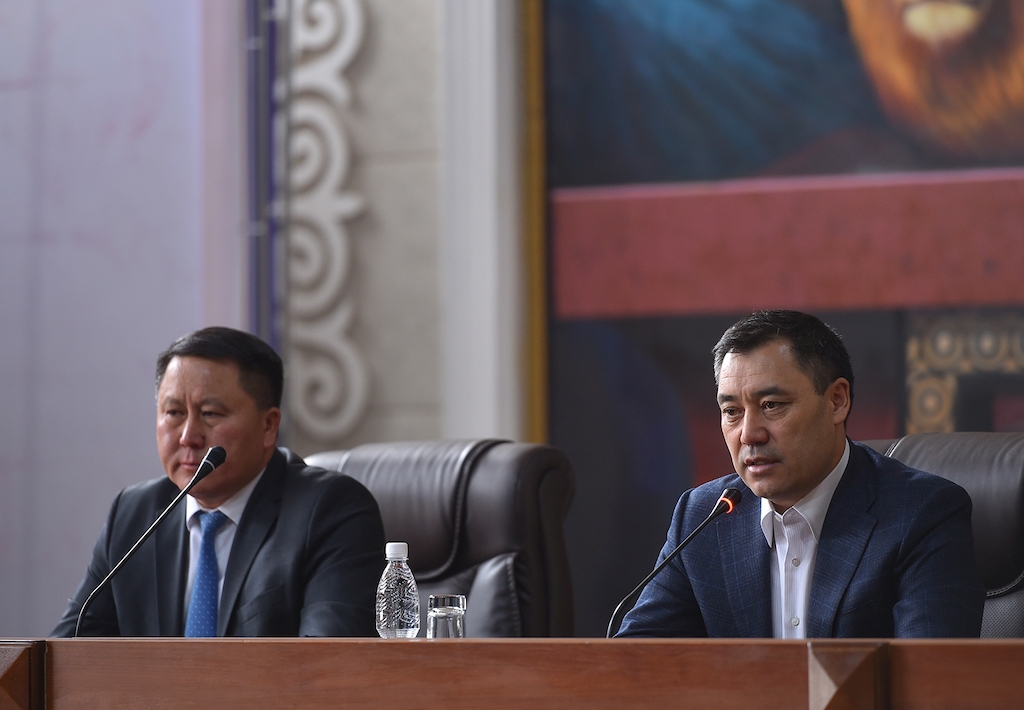 On October 16, 11 days after he was sprung from jail, Kyrgyzstan’s new leader Sadyr Japarov laid out a manifesto of sorts, with the fight against crime and corruption getting top billing.

Speaking of the turbulence that paved his path to power, Japarov said it had “opened a new page in the history of the revival of national identity.” The upcoming war on corruption would be based on “simple and enforceable laws that work the same for everyone,” he said.

Organized crime would stop “dictating terms” on which business is done, he insisted.

His early endeavors to follow through on those pledges are only fueling suspicion, however.

The State National Security Committee, known by its Russian acronym, GKNB, has since October 16 been headed by Japarov’s old and close personal friend, Kamchybek Tashiyev. This body is the tip of the spear in the government’s stated intent to purge the country of its crooks.

To accept the official narrative at face value, things have got off to a roaring start.

On October 20, Rayimbek Matraimov, an elusive, former top customs service official whose name has for anti-corruption activists become a byword for graft, decided to hand himself in to GKNB officers at a gas station across the road from the security services building.

Japarov had name-checked Matraimov in his address, insisting he would “face justice.”

But a judge ruled to immediately release Matraimov and allow him to remain under house arrest. The GKNB said he had already begun paying back $24 million in damages owed to the state. That sum is markedly lower than the $700 million that investigative journalists claim he has siphoned out of the country over the years.

Two days later, officers with the GKNB’s anti-corruption service detained another notorious figure, Kamchybek Kolbayev, a man often described as the country’s foremost gangland figure. Many watching recent developments closely have also alleged that Kolbayev may have even engineered Japarov’s rapid rise to high office. Japarov flatly rejects any suggestion he is backed by organized crime.

Kolbayev was ordered to remain in custody until October 24 as an investigation into his alleged criminal network gets underway.

If Kolbayev is to be prosecuted – a move called for by the United States, a country that has long had the kingpin in its sights – it will be at the hands of a General Prosecutor’s Office under the control of another Japarov ally.

Kurmankul Zululshev was appointed to the position following parliament’s endorsement on October 22.

At first glance, this is in stark contrast from the times of Sooronbai Jeenbekov, whom Japarov knocked off his presidential perch.

Jeenbekov’s prosecutors opened investigations into Matraimov, but they never made any progress. Pointedly ignoring several in-depth journalistic probes, the now-deposed president feebly protested that activists needed to present him with more “facts” if he was to do more.

Kolbayev, a native of Japarov’s Issyk-Kul region, has mostly enjoyed a free rein, spending only token stretches behind bars.

The potential lack of seriousness of Japarov’s anti-graft is illustrated in one counter-intuitive way.

Before heading off into the sunset, Jeenbekov ordered the disbandment of the GKNB’s anti-corruption service. Despite its promising name, this body, created in 2011 under a previous head of state, was decried by civil society activists as a presidential bauble, subject to no independent oversight and deeply politicized.

Japarov ordered its reconstitution almost immediately. Another long-time ally and fellow Issyk-Kul native Bekbosun Apsatarov was appointed to lead it.

Apsatarov will be taking lead on a case rolled out on October 17 that focuses on coal – long an area of rich pickings for organized crime and corrupt officials.

The anti-corruption service says it will investigate claims that officials at Bishkek's main power and heating plant conspired to buy and use unsuitable and dirty coal. Apsatarov’s office said this had damaged the plant and caused pollution.

But the question is: will an investigation fix any problems or just lead to lucrative contract-issuing powers being handed from one set of cronies to another?

Ever since Kyrgyzstan’s first uprising in 2005, the vast Kara-Keche coal deposit in the Naryn province has witnessed aggressive confrontations – even shootouts – between gangs vying for control.

This latest unrest was no exception. On October 6, a mob barged its way into the offices of the Kara-Keche coal mine and forced the management to resign. State-run Kyrgyzkomur coal company, which operates that mine, had to fend off another baying horde assembled outside its offices on the following day.

In this climate, which has been eagerly abetted by forces aligned with Japarov, there are reasons to question whether the coal industry will grow any cleaner.

And some of those who might once have been expected to subject the Japarov administration to severe scrutiny have already fallen into line.

Back in 2011, when Japarov was an opposition politician and Rysaliyev the interior minister, the pair had a heated argument in parliament.

During this standoff, Rysaliyev accused Japarov of “drinking from the [same] trough” as Kolbayev and another now-deceased mob leader.

Last week, however, Rysaliyev, had nothing but good wishes for the new man. He expressed hopes that Japarov would lead in the spirit of Yusup Abdrakhmanov, an early Soviet era statesman who successfully lobbied for Kyrgyzstan’s emergence as fully fledged Soviet republic, but who was later arrested and killed during the Stalinist terror.

“Your place of birth, Issyk-Kul, laid the foundations for the Kyrgyz state,” Rysaliyev told Japarov, casting the acting president in the nation-building mold.