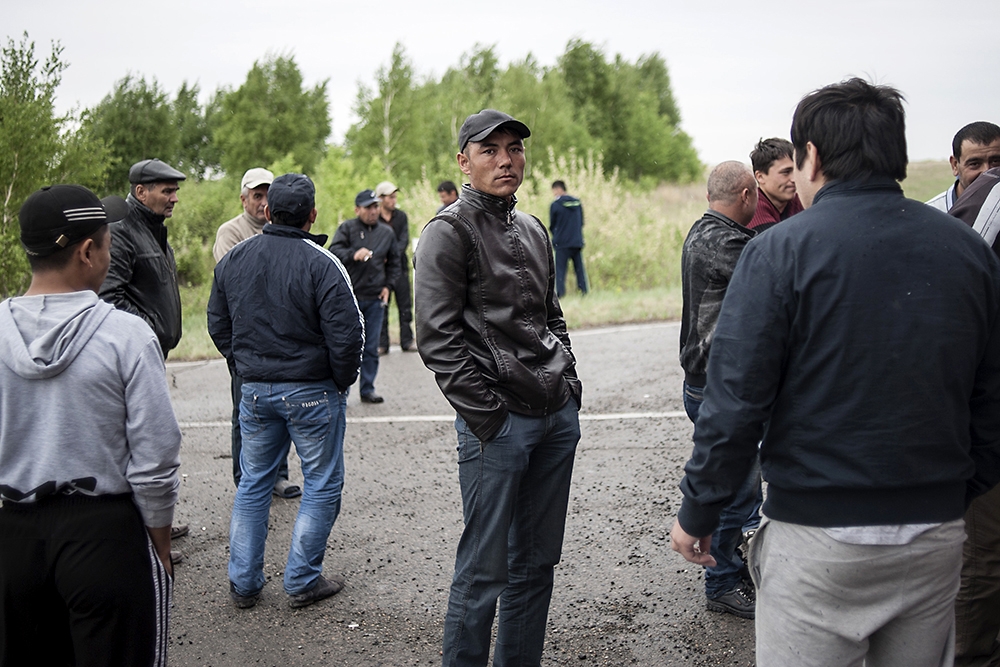 It is the holiday season in Kyrgyzstan and thousands of laborers have come from Russia to celebrate with their families. But this year, some are unsure if they will return in spring, the traditional migration season.

Central Asian migrants are grappling with twin concerns: the ruble has collapsed, slashing their earnings; and Moscow has tightened rules for workers from countries outside the Eurasian Economic Union (EEU). But Kyrgyzstani workers are in a unique situation. Kyrgyzstan has signed up to join the EEU in May. Many migrants support accession, believing it will make their lives easier. But until then, they are in limbo.

With a degree in economics and accounting, Samara Aytibaeva, 28, could not find a job in Kyrgyzstan and left for Moscow in 2011. She started as a clerk at a grocery store, and later, after passing a Russian-language exam and buying a work permit, she worked at a clothing warehouse. In October, Aytibaeva bought a one-way ticket home to the eastern town of Karakol. “Because of the fall of the ruble, it is not profitable to work [in Russia]. I’ve heard many [other migrant laborers] have decided to come back to Kyrgyzstan. People also say it will be more difficult and expensive to get a work permit,” Aytibaeva said.

The ruble’s 45 percent loss against the dollar in 2014 is a source of anxiety for millions of Central Asian labor migrants, who send remittances that prop up their countries’ economies with dollar-denominated transfers. According to the National Bank of Kyrgyzstan, in 2013 the one million or so Kyrgyzstani migrants in Russia sent home $2.2 billion – roughly the equivalent of 30 percent of GDP, according to the World Bank. Preliminary figures suggest transfers fell in 2014.

The ruble’s collapse has hurt Kyrgyzstani exporters – Russia is Kyrgyzstan’s largest market – and helped push the Kyrgyz som down 16 percent in 2014. But the som’s fall has been slower than that of the ruble; a som is now worth more than a ruble for the first time.

Ministry of Labor and Migration Spokesperson Aida Kadyrova says the ruble’s fall is temporary and the economic situation in Russia is not critical enough to encourage Central Asian migrants to return home. Instead, Kadyrova told EurasiaNet.org, foreign workers are leaving Russia due to “tightened migration policies” that took effect on New Year’s Day.

Citizens of former Soviet countries must now enter Russia with an international passport, not the internal documents they could use previously.

And the price for a type of work permit known as a patent more than tripled to 4,000 rubles ($63) per month in Moscow, the Russian city that attracts the most migrants.

Kyrgyzstani citizen Amantur Jusupbek uulu has worked white-collar, service-industry jobs in Moscow for the past five years. Migrants often turn to his blog for advice about finding work in the Russian capital. He expects the new policies to increase the number of unregistered, illegal workers: “Given the confusion with the documents, it is easier to work without permits or not to work at all. If a person comes to Russia to earn money, where will he get more than 30,000 [rubles; currently $470] to get all the permits?” Jusupbek uulu told EurasiaNet.org.

At the moment, most of this jumble of new rules applies to Kyrgyzstani citizens. But with the treaty on membership in the EEU already signed, Kyrgyzstanis do not need an international passport to enter Russia. After Kyrgyzstan finalizes its membership, Kyrgyzstani nationals will not need work permits. The EEU’s rules took effect on January 1 and the bloc now includes Armenia, Belarus, Kazakhstan and Russia.

Kyrgyzstai migrants are currently in “standby mode,” believing EEU accession will improve their situation, says Azamat Aitbaev of Zamandash, a Bishkek-based political party set up to appeal to migrants.

“After Kyrgyzstan joins, there will be more preferences for migrants which will facilitate their stay in Russia and Kazakhstan. Our migrants will be able to work without work permits,” Aitbaev told EurasiaNet.org, adding that he believes they will be treated better, as well.

Egemberdi Myrzabekov, the head of Kyrgyz Alliance, a support network in Moscow, says migrants are eagerly looking forward to accession. “Every migrant, from janitor to high-level specialist, understands the benefits of integration in [the Eurasian Economic Union]. Many barriers will be removed: customs, work permits and patents. Even the [language and history] exams might be removed,” Myrzabekov told EurasiaNet.org.

Yet even the most generous provisions cannot change a disquieting reality: the sinking Russian economy. Though he says he is not planning to leave Russia, blogger Jusupbek uulu admits the country’s economic situation is “depressing.”