Botoyarova wore a cape during the swimsuit category that bore the stylized image of a woman being subjected to abuse. 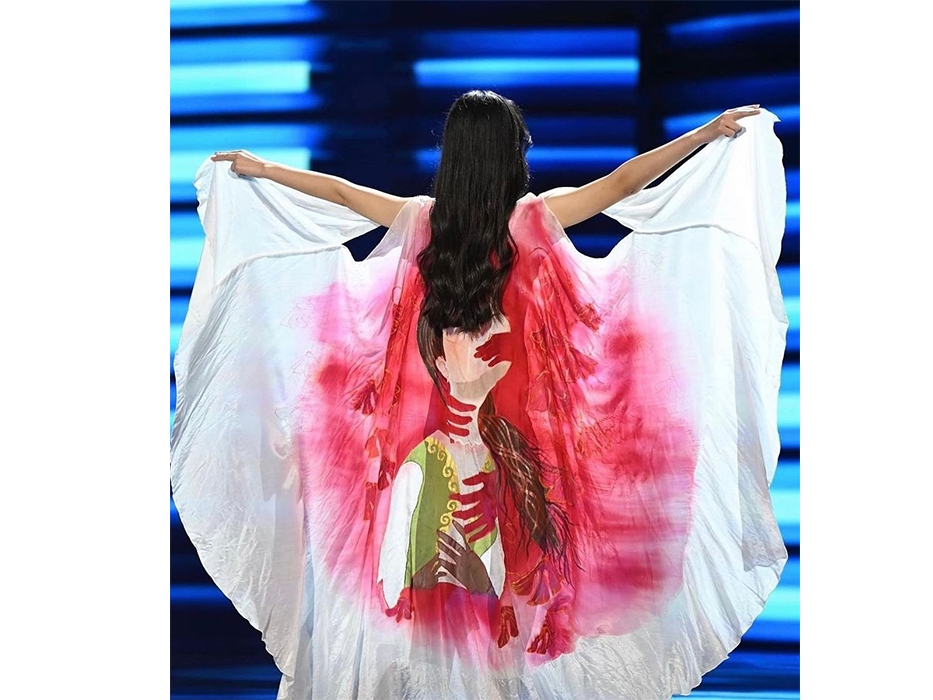 Kyrgyzstan’s entry to the Miss Universe beauty pageant contest has been compelled, amid a welter of public criticism, to issue an apology after using the event as an opportunity to highlight the problem of violence against women in her home country.

Altynai Botoyarova, 18, said in a January 17 Instagram post that she was sorry if her gesture in support of women’s rights offended anybody.

“Maybe because of my young age, I was unable to convey my thoughts in the right way,” she wrote.

The furor surrounds Botoyarova’s choice of the cape she wore during the swimsuit category of the pageant held on January 14. The cape carried the stylized image of a woman in traditional Kyrgyz dress being smothered by hands — an apparent allusion to the problem of gendered violence.

If there was any uncertainty about the meaning of the image, Botoyarova followed up with an Instagram post.

“People who commit violence are cruel and inhumane creatures with serious issues. A normal, sane person would never raise their hand against a weak and defenseless child, against their mother or their children, or even their woman,” she wrote in a post that has since been deleted.

While some Kyrgyz social media users reacted positively, many complained that all Botoyarova had achieved was to discredit Kyrgyzstan’s standing in the world.

“What a disgrace! When will our men come to their senses? And when will our women learn to feel some sense of shame?” read one typical message that both assailed Botoyarova for her perceived lack of modesty and endorsed male intimidation of women.

Even with Botoyarova having been pressured into apologizing, a backlash to the backlash is unfolding. Many commenters writing under the model’s more recent Instagram post expressed solidarity and insisted there was nothing wrong with drawing attention to an important issue.

Aizhamal Bekten, an activist with Bishkek-based feminist group Zhetishet, told Eurasianet that while feminists did not support the idea of beauty contests, they do believe the value of Botoyarova’s gesture cannot be underestimated.

“Many were outraged that when people find out about gender-based violence in our country they will form a negative opinion about us. But these same people are not interested in exploring ways to stamp out this violence,” Bekten said. “People are only interested in the opinions of white people and losses to the tourism sector.”

There was other awkwardness around Botoyarova at the Miss Universe contest, which was held earlier this month in the U.S. city of New Orleans.

When event compere Harnaaz Kaur Sandhu, an Indian model, came to announce the Kyrgyz entry, she accidentally described her as coming from Kazakhstan. This was enough to spark its own mini-controversy and force an apology from Sandhu and the general director of the whole competition.

A prominent veteran politician, Felix Kulov, later used this incident to make the case for renaming the country, so that it could not be confused with other places, such as Kurdistan.