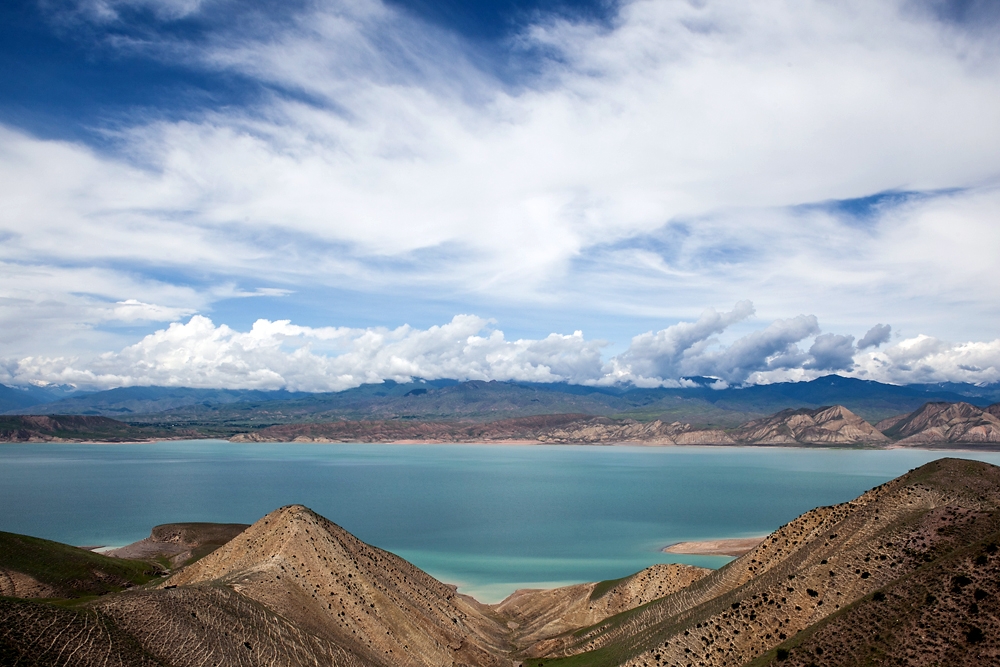 With 22 percent less water than last year in the Toktogul Reservoir – Kyrgyzstan's main hydroelectric reservoir – the country is gearing up for a tough winter. Uzbekistan has also shut off its delivery of natural gas to its Central Asian neighbor. (Photo: David Trilling)

One neighbor cuts off the gas, another halts petrol deliveries and Mother Nature cooks up an unusually dry season. It all means Kyrgyzstan faces a potentially catastrophic energy crisis this winter, if the impoverished and unstable Central Asian country cannot reach deals with two recalcitrant neighbors.

The predicament began with the sale of Kyrgyzstan’s gas transport monopoly, KyrgyzGaz, to Russian energy giant Gazprom in April. “We don’t need KyrgyzGas, we need gas,” President Almazbek Atambayev said at the time, promising that Russia would guarantee a cheap and constant supply. Soon after the deal was completed, however, Uzbekistan stopped gas deliveries, saying it had no contract to supply Gazprom. The two sides, with Kyrgyzstan in the middle, have not been able to reach an agreement.

On July 23, Prime Minister Djoomart Otorbaev acknowledged that Uzbekistan is not going to resume gas supplies anytime soon and instructed the country to prepare for winter shortages. Hundreds of thousands in Kyrgyzstan’s south remain without gas.

Southerners are turning to electricity, which is always in short supply, especially in winter when hydropower reservoirs are low. Officials now expect the gas crisis to drive electricity consumption up 20 percent this winter.

But it is not only the gas shortage that is taxing the electricity grid. This summer, when they should be full, reservoirs that feed hydropower dams are unusually low. The level in the main Toktogul Reservoir is 22 percent below what it was this time last year. For now, Kyrgyzstan is importing electricity from Tajikistan, another country notorious for winter shortages.

“We need at least 16 billion cubic meters of water [in Toktogul] to pass the winter without … regular blackouts,” Rasul Umbetaliev, an energy expert in Bishkek, told EurasiaNet.org. “Most likely by October 1 we will have 12.5 or 12.6 billion [cubic meters], not more. So this shortage will affect the coming winter season.”

That lack of water is hurting neighboring Kazakhstan, too. Since May, the two countries have been negotiating to exchange water from Kyrgyzstan’s reservoirs for electricity in the upcoming winter. Kyrgyz officials say they must restrict the outflow now to save water to produce electricity in the winter. Kazakh officials say they need the water now to irrigate their summer crops.

The Kyrgyz Energy Ministry says the two countries reached an agreement in late July, whereby Kyrgyzstan started providing water to Kazakhstan on August 1. In exchange, Kazakhstan will provide winter electricity equivalent to the amount Kyrgyzstan could have produced with that water.

Kyrgyzstan is also negotiating to import 1 billion kilowatt hours (kWh) of electricity from Kazakhstan this winter, but there appears to be a substantial disagreement on the price. Energy tariffs in Kyrgyzstan are unsustainably low, industry experts have long said, encouraging waste. But officials fear that raising the price could provoke social unrest.

Umbetaliev doubts the sale is feasible. “First of all, 1 kWh of electricity in Kazakhstan costs 9 cents, and in our country it is 1.5 cents,” said Umbetaliev. “That price policy will not allow us to import electricity from our neighbor this winter. Secondly, electricity consumption in that country is much higher during the cold season, therefore it is unlikely Kazakhstan will be able to export to us.”

Perhaps the most mysterious element to Kyrgyzstan’s energy shortages is Kazakhstan’s refusal to allow Russian fuel trains bound for Kyrgyzstan to pass through its territory. In July, the price for petrol in Kyrgyzstan grew roughly 10 percent after Kazakhstan refused to permit 500 wagons to pass.

“We don’t know why our wagons are stopped because [Kazakh customs authorities] do not stop similar wagons on their way to Tajikistan,” Ulan Kulov, director of the Kyrgyzstan Petroleum Products Association, told EurasiaNet.org on July 31.

On August 7, Prime Minister Otorbaev expressed concern that the situation with the petrol deliveries still had not been resolved. Petrol traders say they see no relief on the horizon.

Meanwhile, residents of Osh, Kyrgyzstan’s second city, worry about the coming winter. For now, many cook outdoors during electricity outages. Those outages will increase in duration and frequency when people start using electricity for heat around October.

“How am I going to cook in winter when there are more electricity cut-offs, when it gets dark before I come home [from work], and when it is cold outside?” said Cholpon, 36, a mother of two who works in the local bazaar and cooks over a wood fire outside her apartment block.

The failure of the government to provide basic services, including gas and electricity, will increase tensions this fall, says Ainoura Sagynbayeva, director of SIAR Research and Consulting, a polling outfit in Bishkek.

“If the authorities are not able to provide vital services and if energy prices increase, this will undoubtedly affect people’s mood, and the potential for protest will grow,” Sagynbayeva told EurasiaNet.org.

Sagynbayeva is especially concerned about the situation in and around Osh. “The winter will be very difficult, extremely difficult. And it will be easy [to organize protests],” she said.