Kyrgyzstan’s president dodges a crisis, but his worries are not over

Battle lines in Kyrgyz politics are almost never about policy, but instead center on personalities and their interests. 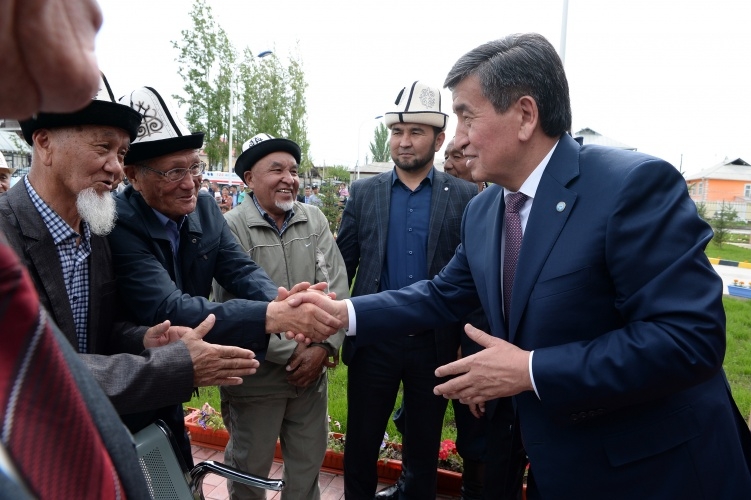 Battle lines in Kyrgyz politics are almost never about policy, but instead center on personalities and their interests. (President.kg)

Politics in Kyrgyzstan is playing out like a Brazilian soap opera these days. Miss one episode of high drama and low cunning and you are adrift.

Surveying over the action is Sooronbai Jeenbekov, a sphinx of a president elected to office in October 2017. His hapless nemesis, spurned ally and predecessor is Almazbek Atambayev.

The bone of contention over the past few weeks has been the Social Democratic Party of Kyrgyzstan, or SDPK – the backbone of the governing coalition. SDPK is the nation’s most venerable political force. It was founded in September 1993 by, among others, Atambayev.

Holding a decisive stake in parliament would not normally be of great importance. For well over a decade, the interests of the legislature and the president’s office have been pretty much aligned. Although the 120-seat Jogorku Kenesh is still a stage for flamboyant grandstanding, lawmakers ultimately almost always fall in line when the president acts.

But a row that evolved in 2018 threw a wrench in the works. Contrary to expectations, Jeenbekov decided to act as his own man and firmly rebuffed Atambayev’s attempts to continuing running things from behind the scenes.

Atambayev, who stepped down after his single six-year term because he was legally required to do so, was livid. Suddenly, his control of the SDPK became a factor. Atambayev could use his chairmanship of the party – a position to which he was installed in a March 2018 congress – to play the gadfly.

The plan was a flop. Most of the SDPK lawmakers turned coats and sided with Jeenbekov.

And earlier this month, the Justice Ministry crowned Atambayev’s humiliation by listing another person – Sagynbek Abdrakhmanov, a reputed Jeenbekov proxy – as chief of the party.

This is the outcome of rival congresses. On April 3, a congress in Bishkek brought together dissident party members under the banner of SDPK Without Atambayev. An event a few days later reconfirmed Atambayev’s chairmanship.

With the levers of power on their side, the anti-Atambayev crew won the day. The old Atambayev team, which still owns the official website at least, can do little more than mutter darkly about its plans to hold rallies and protest.

Yet nobody is going to rule out other trouble.

Iskhak Masaliyev, a lawmaker whose father was First Secretary of the Communist Party in Soviet Kyrgyzstan at the time of the USSR’s collapse, says that while the situation is “stable enough,” it could “change at any moment.”

Masaliyev – who has watched Atambayev’s fall with glee – says there are multiple possible tipping points. These include frustration among supporters of Omurbek Tekebayev, an opposition leader jailed in Atambayev’s day, the more recent imprisonment of several Atambayev allies, and the looming possibility that another well-resourced rival to Jeenbekov, the multimillionaire businessman Omurbek Babanov, might one day soon return from voluntary exile.

Battle lines in Kyrgyz politics are almost never about policy, but instead center on personalities and their interests.

“Political competition here is unhealthy by nature,” Masaliyev told Eurasianet. “There are no differences in terms of ideas between the groups that are competing.”

With Atambayev and his buddies looking ever more toothless, it is Babanov that poses the biggest threat to Jeenbekov. The tycoon ran a slick presidential campaign for the 2017 vote and even earned what looked like a subtle and unspoken endorsement from Kazakhstan. In the end, all his electioneering could not get past the array of dirty tricks deployed against him. And no sooner had the vote taken place, security services started filing criminal cases against him. Babanov quickly made himself scarce. At least one of the charges, which hinges on a spurious allegation that he used a stump speech to whip up racial animosity, still stands.

Supposedly undeterred, Babanov started last month to trail a triumphant homecoming. But in the end, on April 13, when he was supposed to fly into Bishkek, Babanov only got as far as Moscow’s Sheremetyevo airport before losing his nerve. The businessman meekly cited claims that mysterious “third forces” might provoke unrest at rallies organized to mark his return.

It is difficult to see if Babanov will ever get as good a chance as this to make a splash. His return “could have given significant momentum to protest forces,” Azim Azimov, the host of YouTube-based politics show Kontekst, told Eurasianet.

Instead, his backdown was “the first victory in a long time for the powers that be,” Azimov said.

Babanov, who has never proven especially adept at the rougher side of Kyrgyz street politics, may have had the fate of Tekebayev in mind as the prospect of his arrest at Bishkek’s airport drew closer.

Tekebayev, a fellow political heavyweight and long-time Atambayev foe, was detained on corruption charges in February 2017, immediately after flying back to Bishkek. He has been behind bars ever since. Supporters are planning to hold a demonstration to demand his release on April 23.

The moribund and increasingly irrelevant state of Kyrgyzstan’s politics is only partly the result of soft authoritarian practices. Venal concerns play just as big a role.

Bakyt Beshimov, a one-time leading light of SDPK, who went into U.S. exile before the bloody 2010 revolution, says his party entered into terminal decline after it endured “a massive invasion of political crooks and opportunists.” Other ruling parties before it suffered the same fate, Beshimov said.

Dastan Bekeshev, an SDPK lawmaker who has tried to maintain a neutral stance in the Jeenbekov-Atambayev confrontation, is more philosophical.

“All parties have experienced [splits] in recent years,” Bekeshev told Eurasianet in emailed remarks, referring to the executive’s habit of playing divide-and-rule in the legislature. “At one time SDPK benefited [from these splits], but now there is a certain boomerang effect.”