The document has been dubbed a "Khanstitution" for the powers it gives the president. 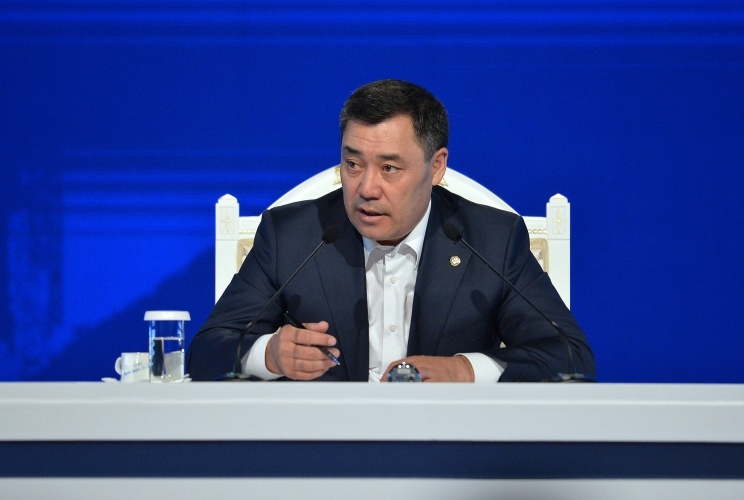 Wrath of Khan: Japarov's critics suspect he is trying to turn himself into an unchallengeable ruler. (Photo: Presidential administration)

A new-look constitution backed by a majority of Kyrgyzstan’s malleable lawmakers has provoked a swell of revulsion among politicians and activists alarmed that the current ruling elite is bent on embracing full-blast authoritarianism.

The draft document posted November 17 on the parliament website envisions widely expanding the president’s powers, reducing the size and roles of the legislature and providing the state with sweeping new abilities to impose arbitrary censorship.

In an explanatory note attached to the proposed new constitution, signatory lawmakers said the overhaul would remedy “contradictions and gaps in the current Constitution and the ineffective arrangement of the organization of ruling bodies” and that it reflected “the demands of the people.”

But as became evident within a day of the draft appearing online, the document does not even reflect the will of its alleged signatories.

Emil Toktoshev, one of the MPs on the list of 80 co-sponsors, said he only learned from social media that he was supposedly one of the authors.

“Yesterday, when I asked … deputies to show me the draft, they showed it to me. I immediately said that I was opposed. There are deputies who were there who can confirm what I am saying. I have always supported parliamentarianism and I stick to that position,” Toktoshev told reporters.

The draft constitution’s token nod to popular representation lies in formalizing the role of a traditional format called kurultai. The ad hoc forums would see large groups of ostensibly representative members of the public gather to agree on proposals and policy critiques that they would then take to the parliament or president of the day. Critics of the institution complain, however, that the format is deeply susceptible to manipulation and does not allow for serious and nuanced consideration of national-level policy.

While parliament would be trimmed from its current complement of 120 to 90 deputies, the president would assume charge of the executive branch and determine national and foreign policy. Instead of the currently permitted single, six-year term, a president would be allowed to run for two five-year terms.

There are also potential implications for media, artists and performers. Article 23 suggests that any media content or public events deemed to be “in contravention of generally recognized moral values and the traditions of the people of Kyrgyzstan” will be banned. The concept of what constitutes moral values is not defined in the document.

The backers of the proposed constitution wish to see a referendum on whether or not to adopt the amendments on January 10, the same date on which presidential elections are scheduled, so as to avoid "budget constraints."

Although the new constitution is nominally the work of members of a parliament that would by rights have been dissolved earlier had the October 4 elections not been annulled, it is clear that is has been engineered by parties close to Sadyr Japarov. Japarov, a firebrand nationalist who was sprung from prison by his supporters during the violence that succeeded those abortive elections, last week resigned as acting president and prime minister so that he could run in the January vote that he is likely to win and thereby confirm his grip on power.

Criticism of these floated changes have been deafening.

The veteran politician and leader of the Ar-Namys party, Felix Kulov, described the amendments as a "usurpation of power" and "insanity." Former MP Ravshan Jeenbekov called them "a tragedy for the country and for anybody who will become president."

Current lawmaker Dastan Bekeshev said the new constitution would mark a return to the authoritarianism seen in the time of the former President Kurmanbek Bakiyev, who was overthrown in 2010.

That was an apposite observation since there are many who suspect that the document was in fact drafted in part by Bektur Zulpiyev, who headed the legal policy department of the presidential administration under the Bakiyev regime. Indeed, the Word document containing the text is registered to Zulpiyev, lending weight to that notion.

Human rights activist and long-standing election observer Dinara Oshurahunova was among many to quip that what had been created could more properly be described as a “Khanstitution,” alluding to the overwhelming powers the basic law would provide the president. Liberal-leaning political activists angered by the draft document plan to hold a protest rally on November 22.

Doubt even surrounds the fact whether this collection of parliamentarians – a thoroughly mercenary assembly that has proven highly changeable in its loyalties and has tended to swing its support behind anybody who wielded power at any given time – is even allowed to propose these changes. Their five-year term was extended only by an ad hoc measure required by last month’s unanticipated political crisis.

“The sixth convocation of the Jogorku Kenesh has been forced to continue its work to prevent a power vacuum, but this convocation no longer has the right to use its powers for basic and extraordinary measures, like proposing constitutional referendums,” said Saniya Toktogaziyeva, a representative of the Lawyers of Kyrgyzstan Association. “Constitutional reforms can be legally and legitimately carried out only by the seventh convocation.”