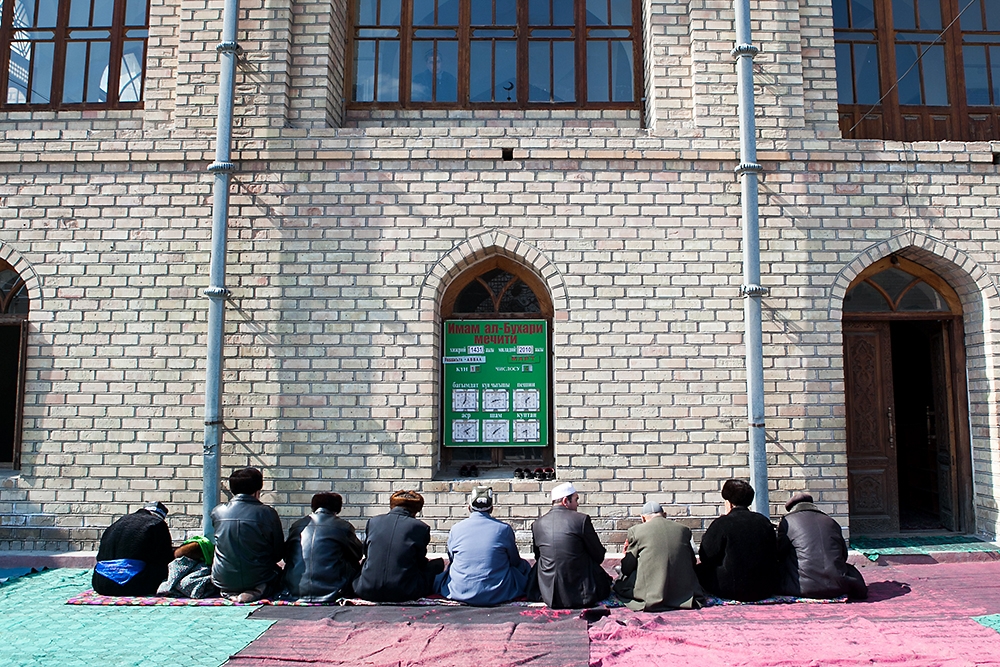 Men pray at the Imam Al-Bukhari Mosque in Osh in 2010. According to Kyrgyz law-enforcement agencies, approximately 230 Kyrgyzstani nationals, considered by security services to be Islamic militants, are now fighting in Syria. (Photo: David Trilling)

Dina’s son Botir was killed last September fighting in Syria for one of the Islamist groups opposed to Syrian President Bashar al-Assad. Six months later, she is not only still struggling to cope with grief, but also facing harassment from Kyrgyzstan’s powerful secret police, the GKNB.

On a warm spring day at her home in southern Kyrgyzstan, as Dina cooked lunch for her husband and grandson, Botir’s son, she described how the GKNB interrogated her husband in February, making him an offer that placed him in a tough spot. [Editor’s Note: Names have been changed to protect the family from official retribution].

The GKNB “grilled him for several hours on Botir’s past and his whereabouts,” Dina said. Toward the end of the interrogation, GKNB officials offered her husband a deal, of sorts: They told him they would fund his trip to Syria to bring his daughter-in-law and two other grandchildren home. But in return, he would have to collect information about Kyrgyz citizens fighting there.

It created a dangerous dilemma: “If he refused the offer, we could have serious repercussions. So he told them that he would think about it,” Dina explained. Her husband confirmed the meeting took place.

Kyrgyzstani authorities have repeatedly said in recent months that the country faces an imminent danger from militants returning home who have been hardened by the experience of fighting in the ranks of Islamic State in Iraq and Syria (IS or ISIS). Harassment from abusive and corrupt security forces makes it difficult to verify official figures, or accurately evaluate the seriousness of the militant threat. Security forces have also hindered efforts to conduct independent assessments without official supervision, several researchers confirmed.

“When lawyers take up cases of suspects accused of religious extremism, they themselves often face pressure from law enforcement agencies,” said an Osh-based lawyer who requested anonymity, citing security concerns.

According to data provided by law enforcement agencies, approximately 230 Kyrgyzstani nationals are now fighting in Syria. The GKNB’s Talant Razzakov told RFE/RL’s Uzbek Service on March 17 that 30 Kyrgyz citizens have been killed in action. Deputy Prime Minister Abdyrahman Mamataliev says authorities detained 40 people affiliated with terrorist groups inside Kyrgyzstan last year, with most arrests taking place in southern regions of the country. “The majority of them had already undergone combat training in Syria,” he said in comments carried by the 24.kg news website. Officials rarely provide evidence to back claims about militant threats.

Highlighting concerns about authorities’ pursuit of alleged militants is the February 9 arrest of Rashot Kamalov, a popular imam in the town of Kara-Suu, for allegedly encouraging the faithful to fight alongside the Islamic State. Kamalov’s supporters say the charges are absurd and appear intended to silence a prominent government critic. Privately, Western officials are also skeptical of the charges.

Officials have since charged Kamalov with membership in Hizb-ut-Tahrir, a London-based Islamic movement that has never been linked to violence, but which is banned throughout the region. Authorities also used his arrest as a pretext to round up Hizb-ut-Tahrir members across southern Kyrgyzstan. There is no known connection between the group and radicals fighting in Syria.

It is not just radical suspects and lawyers who are under pressure, however. EurasiaNet.org found several cases in which family members of fighters in Syria say they are being harassed.

A member of the minority Uzbek community complains police are extorting protection money from him because his mother and brother went to Syria in 2013. The man is doubly suspect in the eyes of law-enforcement officers: not only of his relatives’ Syrian connection but also the fact that he served a year in prison for allegedly participating in ethnic riots in 2010. He maintains the charges were fabricated by authorities.

“It’s so unfair,” the Uzbek man told EurasiaNet.org, speaking on condition of anonymity. “Why should I be responsible for them [his relatives]? It’s not my fault that they have chosen this life.”

Minorities and convicts frequently complain about police extortion. Such harassment led Botir to flee Kyrgyzstan for Syria in the first place. (See our May 2014 story on Botir’s turn to jihad.)

The harassment of family members impacts the calculations Kyrgyzstanis in Syria are making.

Botir’s widow, who married a fighter from Tajikistan after her husband’s death, told EurasiaNet.org by phone from Syria that she will not return home because she fears reprisals. She has been calling Dina, her former mother-in-law, trying to convince her to travel to Syria and join her there. “Life is good here for devout Muslims,” she says she told Dina.

Another Kyrgyzstani fighter in Syria told his relatives that he is disillusioned with the war and wants to return home, but he is afraid of the GKNB. A relative told EurasiaNet.org that he said he would most probably return to Russia, where he worked as a labor migrant before heading to Syria in 2013. Because he traveled to Syria via Turkey, there is no documentary proof that he entered Syria.

The question of how to deal with Kyrgyzstani militants is divisive. Relatives like Dina say they are no threat to Kyrgyzstan and that they should be encouraged to re-integrate into society. “My son would have led a decent life [here] if he had been given a chance. He was a kind-hearted man and a father of three,” she said.

Kyrgyz police, however, are not convinced. Characterizing anyone who has traveled to Syria as a radical militant bent on establishing an Islamic state, a police officer from Osh told EurasiaNet.org that anyone returning from Syria “should be arrested and given lengthy prison terms. If we don’t use harsh measures, we’ll end up in a caliphate.”