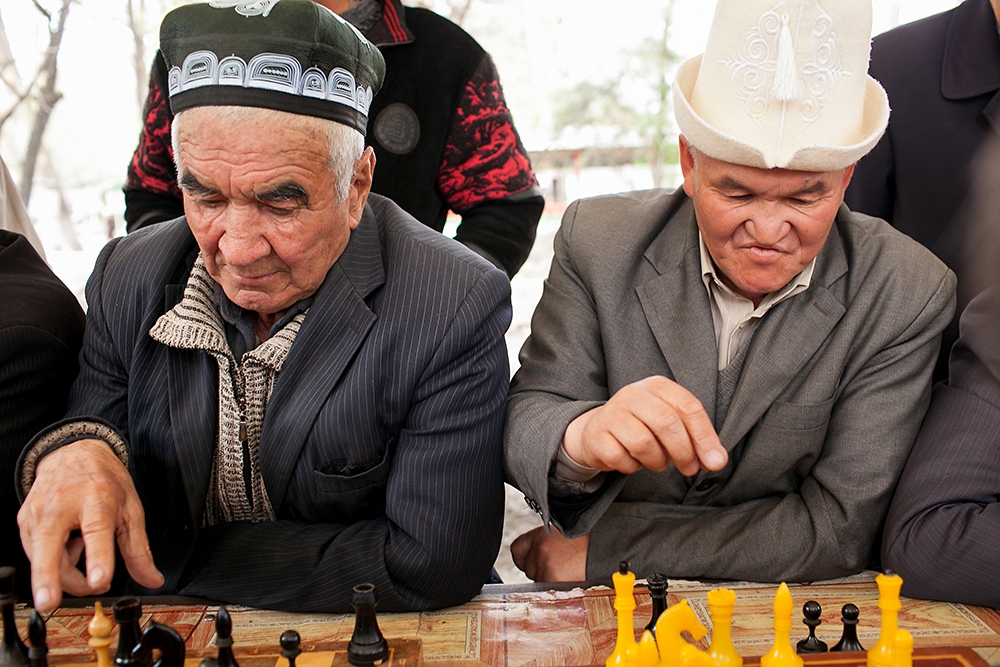 Uzbek and Kyrgyz men play chess together in Osh in 2013. Activists say the secret police are using ethnic tensions and the threat of terrorism to harass minority Uzbeks and enrich themselves. (Photo: David Trilling)

Civic activists have long worried that members of the opaque GKNB – successor to the Soviet-era KGB – are less interested in defending citizens from security threats than in protecting their own business interests. In the wake of the March 27 raid on the Osh office of Bir Duino, those concerns have grown.

Bir Duino, an advocacy group that counts a number of Western governments among its partners, is known for engaging in work that has rankled the country’s security agencies, in particular activities addressing the consequences of ethnic violence in 2010 that largely targeted the Uzbek minority in Osh.

Of late, Bir Duino has taken on charged cases, such as one in which GKNB officers stand accused of extorting thousands of dollars from an ethnic Uzbek businessman. During the March 27 raid on the NGO’s office, the GKNB seized materials related to that case. Bir Duino is also defending a popular ethnic Uzbek imam who was charged in February with extremism after he reportedly told followers that the security forces were exploiting what the government has cast as a fight against terrorism as an excuse to shake down believers. [Editor’s Note: Bir Duino has received support from the Soros foundations network. EurasiaNet.org operates under the auspices of the Open Society Foundations, part of the Soros network].

The organization has also spearheaded demands to release Azimjan Askarov, an award-winning ethnic Uzbek human rights defender known for tracking police abuses. Askarov was arrested on murder charges after the June 2010 rioting and found guilty after a trial widely condemned for irregularities.

The raids on Bir Duino’s office and the homes of two of its senior lawyers in the southern city of Osh on March 27 followed the arrest of an American journalist, Umar Farooq, on March 25. Farooq had spoken with representatives of the organization while researching inter-ethnic tensions and incidents of Kyrgyzstani citizens leaving to fight in Syria – two politically sensitive issues. During the raids, documents from these cases were confiscated, Bir Duino said in a statement, and on April 1, the two lawyers whose homes were raided were questioned by the GKNB. They were later released without any charges being brought.

Both during the reign of ex-President Kurmanbek Bakiyev, and – increasingly – after the ethnic conflict that followed his 2010 ouster, security services in the south have been accused of using Uzbeks as a business opportunity.

“Do we have some unethical officers in the security services who use the inter-ethnic situation or the situation with religious extremism and make money from it? I support that suspicion,” said Ainuru Altybaeva, a member of parliament who was denied access to Bir Duino’s office while the raid was underway. “We have not fully cleaned out the old corrupted system yet,” she told EurasiaNet.org.

While Bishkek’s control over the security service in the south is improving, it is still “weak” there, Altybaeva added.

The GKNB maintains that most Kyrgyzstani citizens now believed to be fighting with Islamic State radicals in Syria and Iraq are ethnic Uzbeks – a claim that appears plausible, and based on the community’s noticeably higher religious adherence. (An unknown number of Kyrgyzstani citizens, likely in the low hundreds, has taken up arms with IS). But rights activists are concerned that state security agents are using that claim as a pretext to shake down members of the minority.

Fears about the spread of IS’s appeal in Kyrgyzstan seem to have offered the security services an opportunity to target Rashot Kamalov, a popular ethnic Uzbek imam in the southern town of Kara Suu, according to Tolekan Ismailova, Bir Duino’s director.

“Imam Rashot Kamalov told people in meetings that the GKNB was using the fight with terrorism to plant extremist materials on religious adherents and extract bribes,” Ismailova told EurasiaNet.org. “A few weeks later he is arrested and a few weeks after that they detain and deport an American journalist, Umar Farooq, who was looking into his case. We draw our own conclusions.”

Bir Duino has lodged a complaint about the GKNB raid with the General Prosecutor’s office.

Meanwhile, some fear the GKNB’s raid could be a harbinger of deepening trouble for democratization activists. Civic organizations are nervously eying the parliament, which is due in April to consider a Russian-style “foreign agents” bill that, if adopted, would restrict the activities of non-governmental organizations. Ismailova believes that the bill, which cleared a committee hearing on March 10, will pass since “Moscow supports the bill and MPs will be wanting to win Moscow’s support before [parliamentary] elections in November.”

The bill is seen as a natural partner to discriminatory legislation banning so-called “LGBT propaganda,” which parliament approved in the first of three readings by a vote of 79 to 7.

A Western diplomat in Bishkek described the bills “dark things on the horizon.”

The international community is frustrated by Kyrgyzstani officials “talking a good game” on the rule of law while failing to hold security services accountable for events like the Bir Duino raid, the diplomat said on condition of anonymity.

“In private meetings they shrug their shoulders and tell us ‘it is the south’ and that the situation there is complicated,” the diplomat told EurasiaNet.org. “We tell them that if Kyrgyzstan is going to qualify itself as democratic – and access donor support that reflects that status – it has to be a democracy for all, including Uzbeks, gays and non-governmental organizations.”