Some enterprising souls have seized the moment to keep their businesses alive. Their main problem now is government flip-flopping and bureaucratic hurdles. 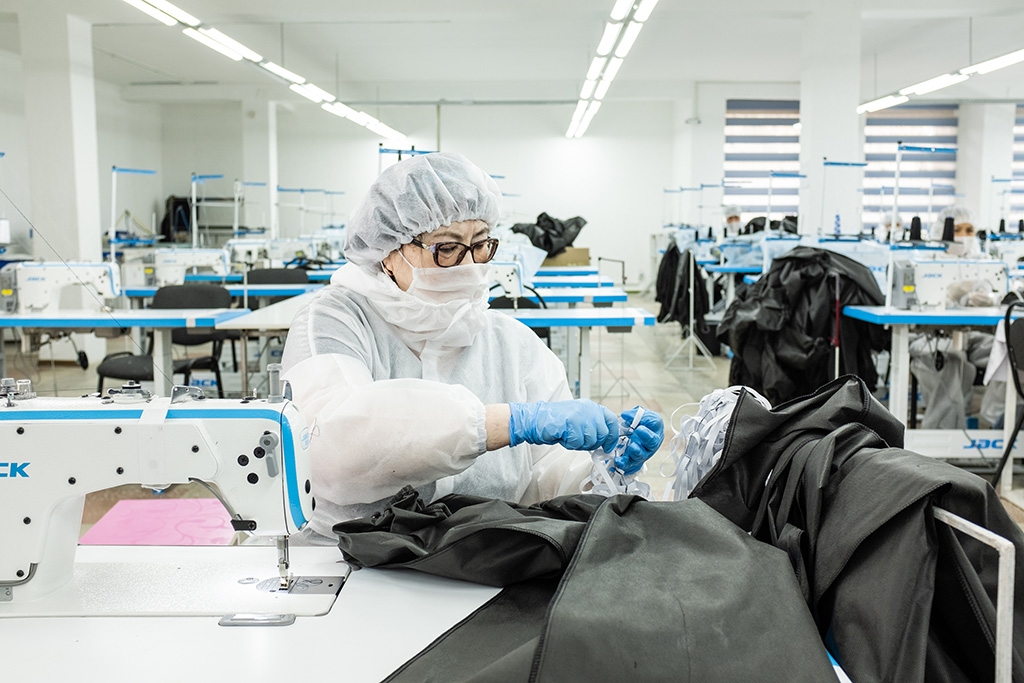 All photos by Danil Usmanov

Even in these times of coronavirus lockdowns, the whir of sewing machines at Zukhra Kemelbekova’s factory in the northern Kyrgyzstan town of Kara-Balta has not ceased.

Something has changed, though. It is not clothes for the summer season that the seamstresses are making, but protective gowns and masks.

As in many other parts of the world, the COVID-19 crisis is triggering an economic and productivity crisis, but some enterprising souls have seized the moment to keep their businesses alive. Their main problem now is government flip-flopping and bureaucratic hurdles.

There is a strict routine at Kemelbekova’s factory at the start of the working day. Things begin with staff being sprayed with disinfectant, down to the heels of their shoes.

“Every two to three hours, the cleaners come in and disinfect everything with bleach. We transport the seamstresses to work and take them home every day. We tell them to avoid contact with people and refrain from going out,” Kemelbekova told Eurasianet.

For additional safety, there is an empty workstation between each of the 40 seamstresses still working – some have been let go for the time being – so as to maintain distance. Wrapped in their protective garb, the gloved workers blend into the factory’s freshly whitewashed walls and worktables as they carefully stitch protective gowns and masks.

Kyrgyzstan’s cottage textile industry was among the first areas of the economy to feel the pain when the coronavirus epidemic erupted in earnest in China at the turn of the year.

The timing could not have been worse. For a while in January, there were no deliveries of raw materials because of the weeklong Chinese New Year holidays. Then, as the scale of contagion became evident, Kyrgyz authorities closed their eastern border as a precautionary measure. Shortage of materials drove up costs, as manufacturers scrabbled around for what was available or looked further afield, like Turkey, for supplies.

Only the businesses which had the luck or foresight to stockpile raw material could work freely. Others used leftover material or accessories still in stock.

As the situation worsened, the demand side got a hammer blow too as Russia and Kazakhstan, two key markets for Kyrgyz textile exports, restricted movement into the country.

This all happened just as Kemelbekova – she is known as Zulya Eje, or Auntie Zulya, to her staff – had opened her Kara-Balta factory. She has been in clothes-making for 15 years, before which she sold lingerie in Russia. Before setting up shop in Kara-Balta, she had a factory in Bishkek, but those premises could only accommodate 70 people and it had come time to expand. The new premises are in an overhauled Soviet-era department store.

The Kara-Balta factory’s output was supposed to be dispatched in May to buyers in Kazakhstan, Russia, Tajikistan and Uzbekistan, but the clothes are now piling up in warehouses.

“We are making big losses because we invested about $2,000 in fabric alone and it is just sitting there. So, we have quickly reoriented ourselves so that the staff at least have jobs and money with which to buys groceries,” Kemelbekova said. 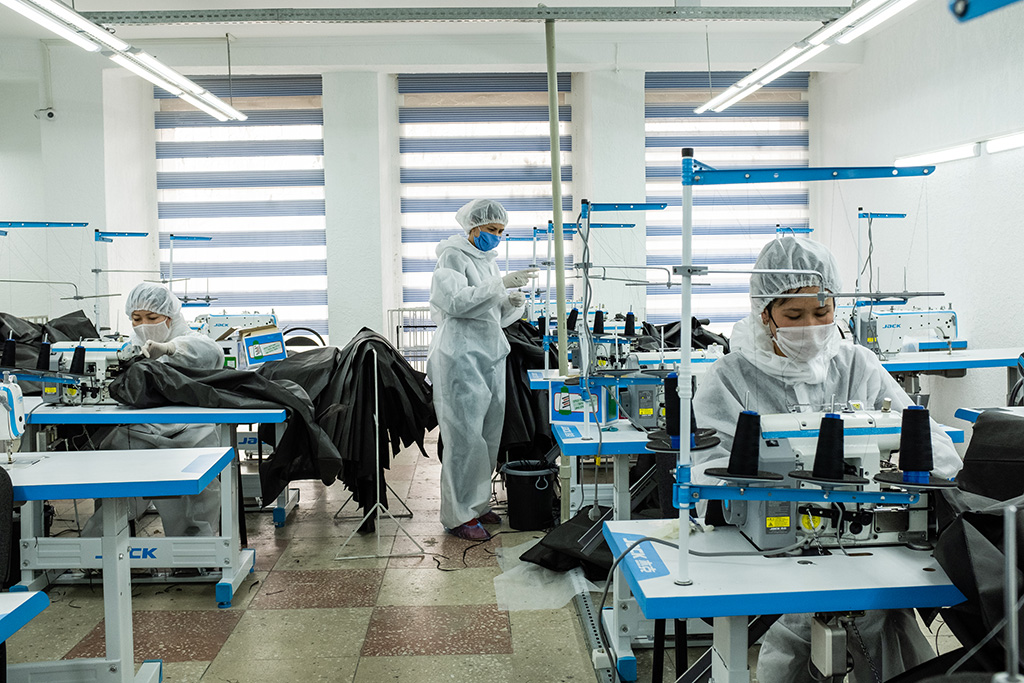 It became quickly apparently as the coronavirus crisis loomed that pharmacies did not have enough masks. So Kemelbekova went online and bought 100 rolls of medical nonwoven fabrics, which is what is used to make disposable clothes for hospital workers. With these, the seamstresses began stitching triple layer masks. Within a few days, they had got production up to 3,000 units daily. Some of their production was donated to orphanages and employees at Bishkek city hall. The rest were sold direct to the public over the internet.

Invaluable help has come from the Association of Light Industry Enterprises, which has done heavy lifting in securing the transit passes for truckers carrying supplies and has negotiated with the government on allowing exports.

Making protective masks and other such items requires specific authorization, which the business lobby group also helped with.

“The disease came upon us suddenly. The government granted us concessions and gave us permission to sew without licenses,” Kemelbekova said.

Since turning its hands to PPE, the Kara-Balta workshop has upped daily output from 3,000 to 10,000 kitbags, each including gowns, regular scrubs, caps, shoes covers, gloves and glasses. The kits sell to government and private clinics, as well as cafes and restaurants still doing home deliveries.

“Mainly, people themselves come to pick them up,” Kemelbekova said.

In some instances, medical staff are buying the protective garb with their own money, which reflects the lack of resources being provided by the government.

After an encouraging start, however, the business ran into trouble. For a while, the government had banned the export of PPE.

“I work with Russia and I have many clients who want to buy masks and protective suits from us in large quantities,” Kemelbekova complained earlier this month. 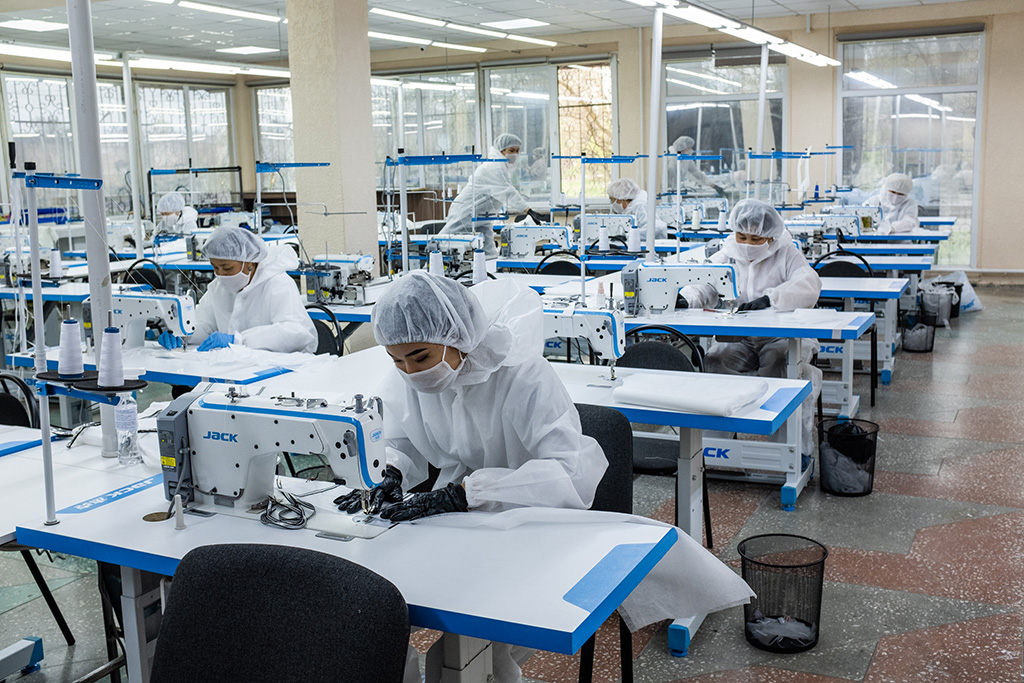 After Kemelbekova spoke to Eurasianet, she and her peers received some slender encouragement when the government lifted that export ban. And yet, the scrapping of the ban is of only symbolic use given that the border to Kazakhstan remains firmly shut for now.

What is more, as Saparbek Asanov, the president of the Association of Light Industry Enterprises, told Eurasianet, government entities have begun demurring when it comes to buying PPE without certification. Companies can produce the masks, but then they have no certainty of selling the ready product. Of the more than 700 companies belonging to Asanov’s association, around 20 are producing masks and protective gowns.

“Because our companies have not been previously engaged in this sector, we have faced the problem of standards non-compliance. They sewed a lot of protective masks, there are even companies making 250,000 units daily,” Asanov said. “A lot has been produced, but a huge number of masks and protective suits are now lying in warehouses.”