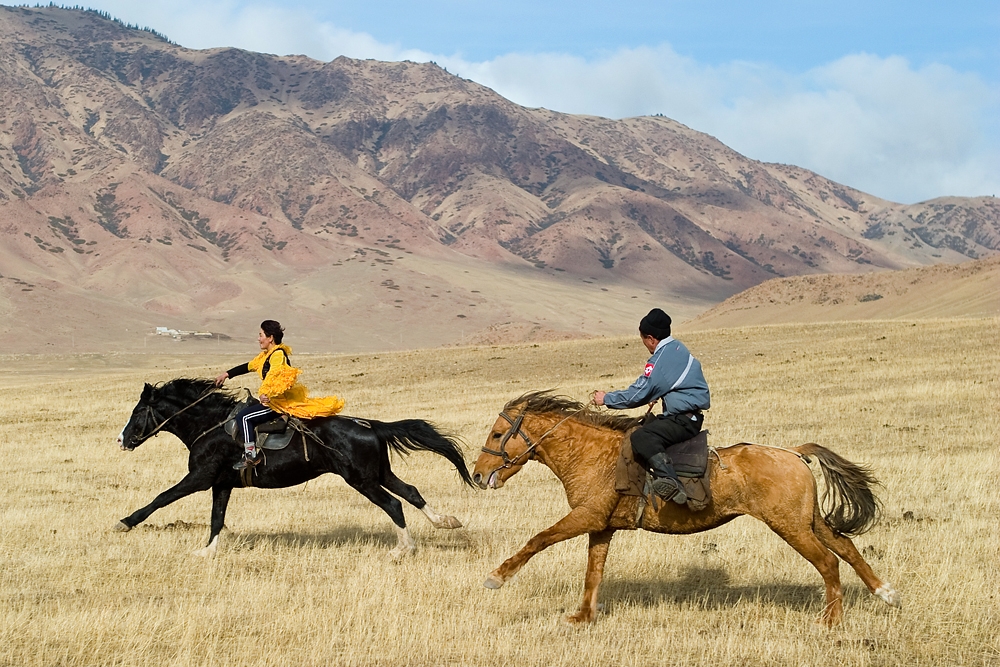 Tengrists pray to their ancestors, to the spirits of nature, and to Tengri, the eternal blue sky, to cleanse and empower them. (Photo: David Trilling)

Arslanbek Maliyev grew disillusioned with Islam when he realized foreign missionaries who came to Kyrgyzstan following the collapse of the Soviet Union were more concerned with building mosques than they were with education.

“They are not interested in our education system, in progress,” Maliyev, a former member of parliament, said of the missionaries, most of whom hailed from Arabic-speaking countries. Maliyev, who today runs an organization dedicated to promoting Kyrgyz culture, said that after he read the Koran, he came to the conclusion that many tenets of Islam didn’t blend well with the nomadic traditions of the Kyrgyz.

Before the communist era, before the arrival of Islam, many on the Central Asian steppe followed an ancient Turkic set of beliefs: Sometimes described as animism, sometimes as paganism or shamanism, devotees these days call their ethnocentric ideology Tengrism. Claiming as many as 50,000 followers in Kyrgyzstan today, believers are fighting for state recognition. There is also a growing, albeit small, Tengrist movement in neighboring Kazakhstan.

Kyrgyz authorities refuse to identify the Tengrist belief system as a religion. Though officials do not say so themselves, adherents believe that authorities worry, as the influence of Islam grows, recognition of another national religion could stoke tension and divide Kyrgyzstan’s predominantly Muslim population.

Of course Islam did not spread in a vacuum in Central Asia. Islam combined with earlier practices to create a syncretic faith that might trouble a religious conservative from outside the region. Today, the boundaries of faith are still poorly defined in formerly communist Central Asia, where many people still tie ribbons to trees in places they believe are sacred, or burn herbs in their homes to ward off bad spirits. But growing numbers of Kyrgyzstanis – who largely consider themselves Muslims – are trying to purify their faith, especially in the south.

Tengrists, on the other hand, pray to their ancestors, to the spirits of nature, and to Tengri, the eternal blue sky, to cleanse and empower them. Compared with prominent religions like Islam or Christianity, Tengrism only vaguely addresses the burning questions of human existence, such as the relationship between god and man, and the afterlife, says Nazira Kurbanova, a theologian at Arabaev Kyrgyz State University. “Tengrists have Tengri, and they believe that this is enough,” she told EurasiaNet.org.

Zamir Rakiyev, Kyrgyzstan’s deputy mufti, described Tengrism as a philosophical movement. Unlike other religions, it does not have a holy book, he noted. “In religion, there is a prophet interceding between God and believers. And Tengrism does not have such. I asked the Tengrists if they have a holy book. They replied that they could write one. Can that be a religion?” Rakiyev told EurasiaNet.org.

Rakiyev and Kurbanova were both members of an expert panel for the State Committee on Religious Affairs, which last August declared it could not recognize Tengrism. The 11 members agreed unanimously.

In response, a group of prominent public figures, including the president of the Academy of Sciences and the head of the Communist Party, wrote to President Almazbek Atambayev requesting his help for the sake of Kyrgyzstan’s national identity: “The dominant religion of the country is currently Islam, which due to its diversity (74 groups) sometimes leads to a dead end and collides with Kyrgyz customs, traditions, culture [and] language,” the January letter, which was published by AKIpress, said.

The Tengrists are just looking for publicity, says Orozbek Moldaliyev, the director of the State Commission on Religious Affairs. “We explained to them that we rely on the conclusions of theologians. And if they recognize Tengrism as a religion, the State Commission will register them,” he told EurasiaNet.org. The Tengrists “can register as a public association with the Justice Ministry and carry out their activities and do whatever they want to do.”

Anarbek Usupbayev, who runs a foundation in Bishkek to promote Tengrism and “preserve the traditions and culture of the Kyrgyz people,” says representatives of the State Commission told him his group “would split Kyrgyz into Muslims, Tengrists, and enmity may emerge between them.” Moldaliyev denied his office gave any such justification for its decision.

Some of Usupbayev’s beliefs do sound like they could offend. “We Kyrgyz must not wear beards and burkas,” he told EurasiaNet.org. “Tengrism, not Islam, is the ancient religion of our Kyrgyz ancestors.”

“We urge the Kyrgyz to develop their traditions, customs, culture, language, and national games. This is where the basis of our faith is,” Usupbayev said, explaining that the holy tenets of the faith are found in Kyrgyz traditions such as horse wrestling, and kyz-kuumai (“catch the girl”), where a young man and women race on horseback while the man tries to steal a kiss.

Asked to describe the bedrock of his faith, he said, “Each of us knows our genealogy seven generations back, and this is the basis for Tengrism.”