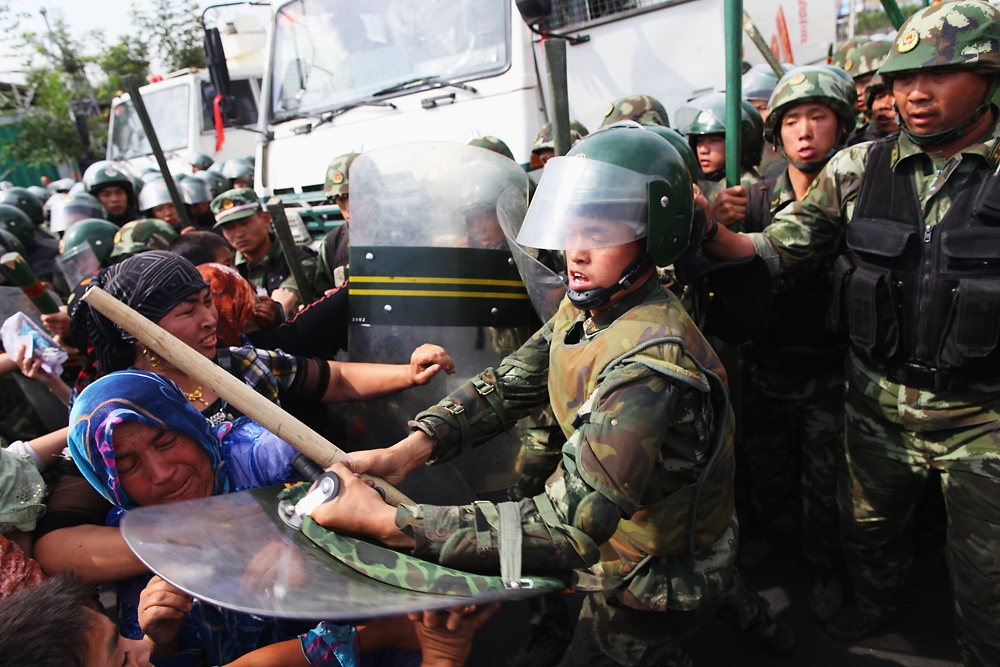 Chinese police clash with ethnic Uighurs in July 2009 in Urumqi, the capital of China’s Xinjiang Uighur autonomous region and the center of the country’s ethnic Uighur population. Ethnic Uighurs living in Kyrgyzstan fear their activism for minority rights may also attract more scrutiny by security services as it has in neighboring China, which is Kyrgyzstan’s largest trading partner and considers ITTIPAK – a Uighur activist organization – to be a separatist group. (Photo: Guang Niu/Getty Images)

Artik Hadjiev is a middle-aged man with a gentle face and smiling eyes. Sitting in a Bishkek hotel lobby wearing a smart suit, he speaks quietly and eloquently about community building and collective aid. It is hard to believe that some could consider Hadjiev a threat to regional security.

But Hadjiev is the president of the Kyrgyz-Uighur Unity Association (ITTIPAK). And in a region where minority rights are a delicate topic, some governments are bound to view him as a potentially dangerous individual.

Across the border, China’s conflict with Uighurs in Xinjiang Province has worsened this year, featuring deadly clashes in July and a life sentence on separatism charges given to Uighur economics professor Ilham Tohti in September. China is Kyrgyzstan’s largest trading partner and Bishkek is eager to please Beijing. Thus, Uighur activism in Kyrgyzstan tends to come under intense scrutiny from both countries’ security agencies.

For over half a century the Uighurs, a Turkic ethnic group straddling borders in Central Asia and western China, have been a source of concern for Beijing. Chinese authorities have branded its Uighurs terrorists, separatists, and Islamic extremists, and embarked on what rights activists call a brutal campaign of repression. The Chinese government considers Kyrgyzstan’s ITTIPAK to be a separatist group. Uighurs maintain they just want Beijing to respect their basic rights.

Comparatively, Kyrgyzstan is seen as a safe haven for Uighurs. During the Sino-Soviet split of the 1960s-1980s, Soviet authorities permitted the Uighurs to enjoy a substantial amount of cultural expression. Today, they comprise about 1 percent of Kyrgyzstan’s 5.5 million people.

Chinese political and economic influence in Kyrgyzstan has risen substantially since the Central Asian state gained independence in 1991. And as bilateral ties have strengthened, Kyrgyz authorities have upped their surveillance and repression of Uighurs, local political analysts say. In recent years, authorities have frequently prohibited Uighur meetings, activists say. Moreover, according to the World Uighur Congress, Bishkek extradited 50 Uighurs to China from 2001-11. Human Rights Watch has expressed concern that Kyrgyz authorities too often target Uighurs with trumped-up terrorism charges.

In 2010, agents from Kyrgyzstan’s State Committee on National Security attempted to stop a human rights film festival from airing an Australian documentary about a prominent Uighur activist. Officials said the film could inflame ethnic tensions. Activists said the authorities were bowing to Chinese pressure.

The Shanghai Cooperation Organization, a regional club of countries with poor human rights records, requires members to align their anti-terrorism and separatism regulations with the Chinese government’s standards, which are vaguely defined, thus giving Beijing leeway to brand any individual or group it finds problematic as a potential terrorist threat.

A week after one high-level SCO meeting, in 2011, four Uighur activists from Kyrgyzstan were prohibited from traveling to the United States to attend a conference; a colleague alleged that China had requested local authorities prevent them from traveling. According to a report by Canada’s Immigration and Refugee Board, the Kyrgyz police escorted the activists off their plane without providing any explanation why they could not travel.

These days, some prominent Uighurs in Kyrgyzstan are cautiously optimistic. Last month, ITTIPAK held its 25th anniversary congress without a problem. Members are quick to say the situation has changed. Anonymously, though, some grumble about a lack of language rights, that they have no school to teach in their language.

The tension affecting Kyrgyz Uighurs may be connected more to local interethnic issues than top-down repression. During political violence that engulfed the capital Bishkek in 2010, there were sporadic reports of Uighurs being targeted by mobs. A Uighur restaurant in Bishkek was torched, the Uighur American Association reported at the time. Radio Liberty reported that some Uighurs in a Bishkek suburb suffered gunshot wounds. One Uighur man described to EurasiaNet.org how parts of the Uighur-dominated Madina Bazaar in Bishkek were burnt to the ground during several hours of ethnic violence that year.

On the sidelines of ITTIPAK’s conference in Bishkek, Ulrich Delius of the Society of Threatened Peoples, a Germany-based organization campaigning for Uighur rights, said he and other Uighurs from the West were invited to lend the event legitimacy and forestall a government crackdown. “It’s more difficult to shut down an event when the world is watching,” said Delius. He added that ITTIPAK leaders felt the presence of foreigners would help “demonstrate to the authorities that they have nothing to hide.”

Under the current conditions, the Kyrgyz minority embraces a moderate, anti-separatist stance, Delius says. ITTIPAK’s leadership is adamant that the organization does not support Uighur separatism in Kyrgyzstan or elsewhere, and has no involvement in events in China. Members are also reluctant to discuss sensitive issues on the record.

According to Bektemir Murzubraimov, chairman of the Kyrgyz Assembly of Nations, a government-backed group, ITTIPAK plays a strong role in conflict prevention by addressing the grievances of Kyrgyzstan’s Uighur population and meeting needs when the government does not. “If people are upset because their children cannot study the Uighur language, they provide a language school. If people are unhappy because of unequal resource distribution and poverty, they provide charity,” Murzubraimov explained.

With this type of assistance, IITIPAK aims to ensure that Uighurs are not dragged into conflicts – such as the 2010 clash between Kyrgyz and Uzbeks in southern Kyrgyzstan that left hundreds dead, and which many believe was sparked by economic grievances – says Murzubraimov.

For now, the Kyrgyz government appears to be putting up with ITTIPAK and its message of Uighur cultural preservation. But those filling ITTIPAK’s ranks remain keenly aware that authorities are keeping a watchful eye on them.

Cristina Maza is a freelance journalist.