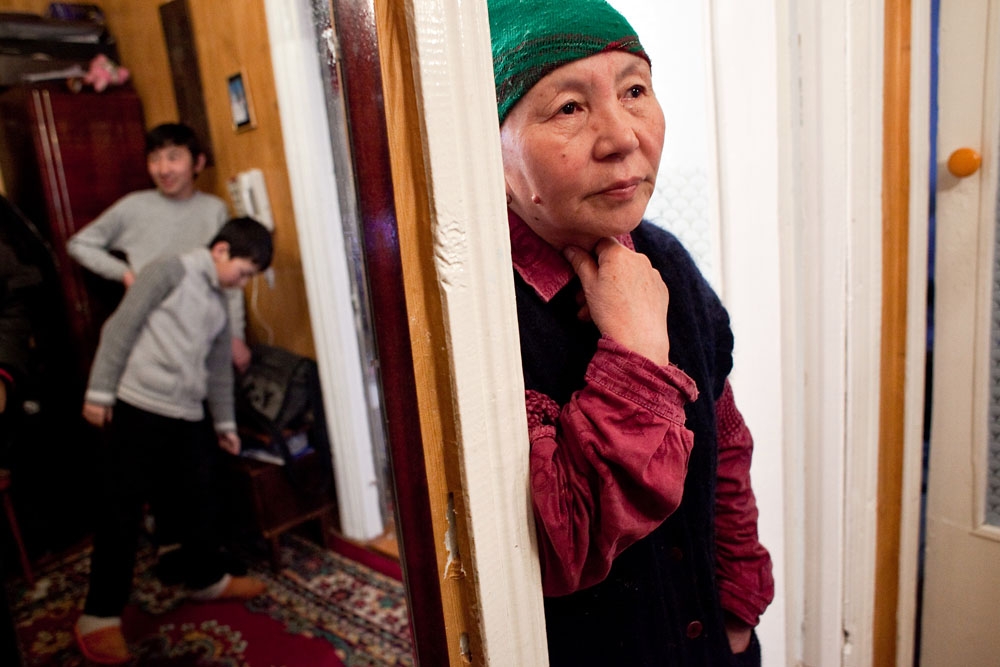 Darika Mambetova lives in a two-room apartment in Kyrgyzstan with her three adolescent grandsons. Her son and daughter-in-law, the boys’ parents, haven’t been back from Russia since they left two years ago in search of work. Another daughter lives in Kazakhstan.

Mambetova, 63, fears she is unable to provide the boys the kind of guidance and discipline that they need.

“What kind of upbringing we can talk about? It is better when kids live with their parents,” she said, squatting to bake bread in a small electric stove on the floor of her home in the provincial city of Naryn. “I think the future might not be so good. When kids are without their parents, there is something they are missing. Even if they do something wrong, I can’t punish my grandchildren.”

Though her son sends remittances, “he can’t send money regularly. They are collecting money to get Russian citizenship,” Mambetova explained.

“This situation is bad,” affirmed Aysalkyn Karasartova, head of employment and migration at the Naryn Oblast administration office. “Of course, old people can’t give a child what he [or she] needs for proper development. They are from a different generation; therefore, they can’t give what the parents could give. I think those kids will not be so prepared and educated culturally and intellectually. In the end, they may be estranged from their parents and feel morally abandoned.”

Experts estimate 800,000 Kyrgyz migrant workers have left their families and jobless villages to search for work in Russia and Kazakhstan. A generation of working-age adults – parents of infants, children to the elderly – is thus absent. A 2009 report by the OSCE and the EU describes the “emergence of villages inhabited only by elderly and children.” [For additional information see EursaiaNet’s archive].

In the aftermath of the April upheaval that caused the collapse of Kurmanbek Bakiyev’s administration in Bishkek, many Kyrgyz now worry about a new bout of economic distress. Forecasts suggest the economy will contract during the second quarter of 2010, a setback induced by political instability. In the months, prior to the early April unrest, the country was showing signs of emerging from a prolonged downturn. [For background see EursaiaNet’s archive.]

In the mountain village of Ak-Kiya in Naryn Province, where winter lasts for more than half the year, Shirin Kerimbekova, 51, raises two of her grandchildren on her meager pension, while her sons work in the Russian Far East. She says her sons send money for coal, but irregularly.

“Sometimes, there is not enough food; sometimes they want candies; and sometimes we don’t have sugar. We live on my pension, which is 1,500 soms [$34 per month]. My youngest son had to get his passport the other day; I paid 500 soms for that,” she explained.

The economic stress is taking a considerable toll on grandparent-caregivers. A 2008 study sponsored by Help Age International, a non-governmental organization (NGO) that works to help older people “lead dignified, secure, active and healthy lives,” found that “the migrants’ parents are the ones who always take the heaviest physical and emotional load of separation and disconnection caused by [labor] migration.”

Grandparents who raise their grandchildren “have to raise them on their pension. It is very difficult, the quality of life is worse,” says Mukanbet Ismakeev, 63, a teacher in Ak-Kiya, who also helps raise five of his grandchildren.

“If the family doesn’t have coal, for example, the kids will have to miss school and get firewood. … There are a lot of shortcomings in having grandparents raise children,” he said.

Eppu Mikkonen-Jeanneret, Help Age’s Bishkek-based regional director for Eastern Europe and Central Asia, believes many kids in the “skipped generation” may end up unprepared to meet the challenges of adulthood. “If the parents stay away for long periods of time and there are limited means of communication, as often is the case, children can feel they have been rejected, which can then negatively affect their sense of security, stability and ability to form relationships in later life,” she told EurasiaNet.org.

The social effects could be permanent, leaving Kyrgyzstan to suffer continued decline in population and living standards.

A drop in the quality of education in Kyrgyzstan is complicating matters. One aid worker, who wished not to be identified because of fears it could bring her organization unwanted government scrutiny, described a bleak situation: Children are “not receiving the kind of education and care required to become a skilled productive labor force. Unless there is investment in the human capital, then it’s easy to see how Kyrgyzstan will carry on producing a low skilled labor force for Russia and Kazakhstan, both of which are experiencing depopulation due to aging and will require substantial flow of migrants,” she said.

Of those who have migrated in recent years, 38 percent send their parents help, Help Age found. That number dips considerably when grandchildren are not present.

For grandparents like Ismakeev and Kerimbekova, life is an endless cycle of worry. “I am a mother. I want my kids to be with me. When they are far away, all kinds of thoughts come to my mind. I wish people would have better life, more money and better times. I worry about my sons very much,” says Kerimbekova. “We hope one day there will be jobs in Kyrgyzstan.”

Yet they both know their grandchildren will have few options, but to migrate away too. “A lot of our people become Russian citizens. They stay in Russia and their kids stay in Russia. They speak in Russian. I think in this way the population of the Kyrgyz nation will decline and the Kyrgyz language might be forgotten,” said Ismakeev, the teacher.