One of the key elements of the EU-brokered deal, a broad amnesty, is facing objections from the party it was designed to help. 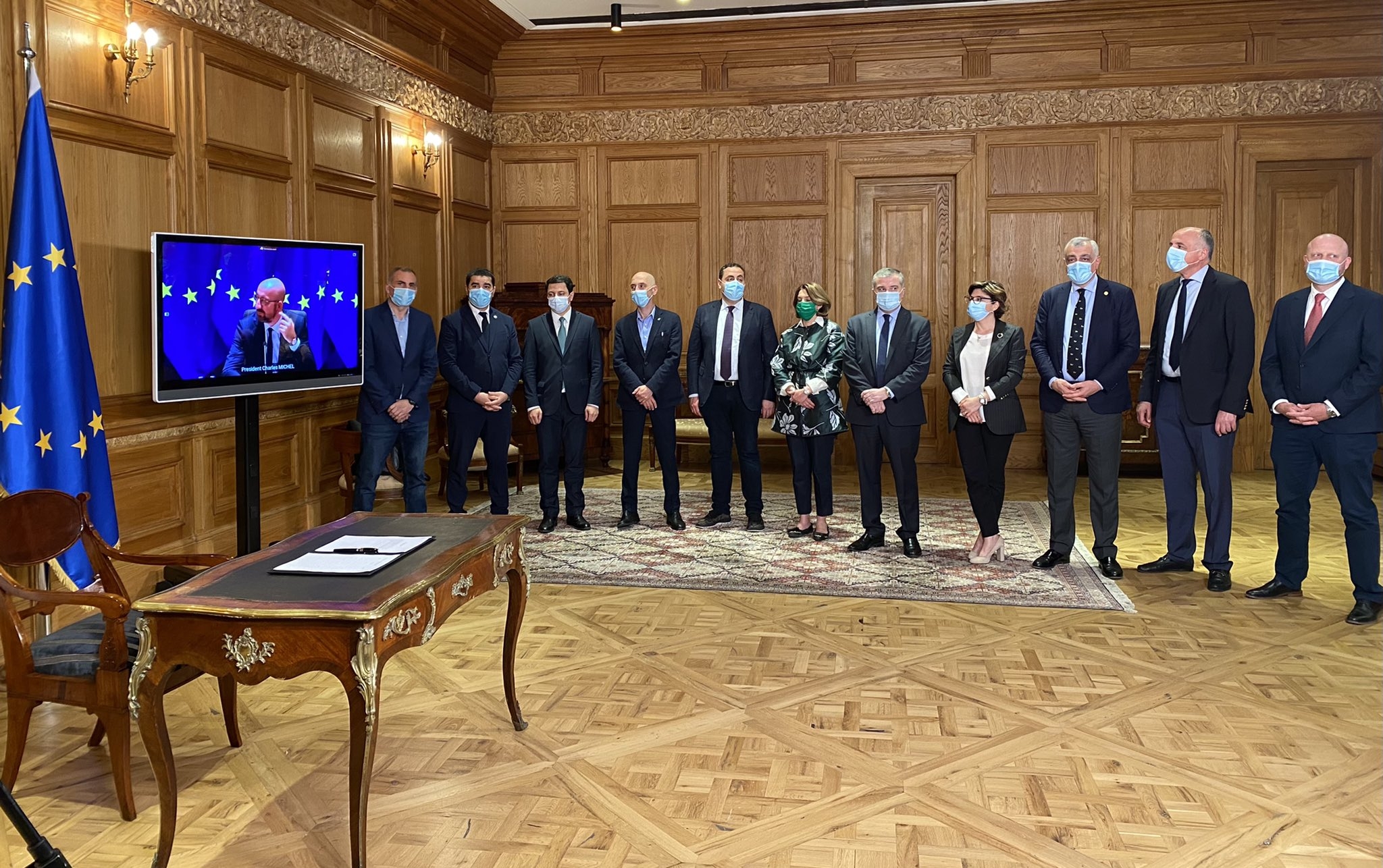 Only days after Georgia’s opposition and government signed a celebrated, European Union-brokered deal to end the country’s months-long political standoff, the agreement is foundering. The two sides are now bogged down in legal wrangling over one of the key elements of the deal: a broad amnesty that would include the release from jail of key opposition figures.

During the crisis, one of the main demands of the opposition was the release of Nika Melia, the chair of Georgia’s largest opposition party, the United National Movement. The government resisted, arguing that he had violated the law by allegedly inciting violence at protests in 2019.

European and American diplomats got the ruling Georgian Dream party to agree to release Melia via a broad amnesty law. The law would have to be introduced by the ruling party and passed by parliament, which is now nearly exclusively made up of the ruling party as the result of an opposition boycott. Some opposition groups and figures have supported the deal and agreed to end their boycott, but the UNM itself has refused to endorse the deal and insists that Melia be released immediately.

The Georgian Dream argues that Melia can leave jail before the amnesty goes into effect if he pays bail that the court has ordered. But Melia refuses, arguing that the case against him is politically motivated. “Good luck waiting for me to pay you the ransom,” Melia said in an April 20 Facebook post from jail.

European diplomats even offered to pick up the tab: the European Union was willing to pay the bail via an unnamed non-profit group to end the crisis. The offer of bail, and the broader mediation effort, have marked an unprecedented involvement by the EU in Georgia’s domestic crisis. But Melia declined the offer, saying nobody should be paying bail in a trumped-up case.

Ruling party officials dismiss Melia’s refusal as an attempt to play the martyr. “If he wants to get out soon, the European Union will pay his bail … If he thinks his dignity is more important than Georgia, then fine, he will stay in for a while until the amnesty bill is passed and he is pardoned for his alleged crime,” said Shalva Papuashvili, a member of parliament from Georgian Dream.

Aleko Elisashvili, leader of the small opposition group Citizens, insists that Melia should pay his bail and get out now. “Melia should simply stand up and leave. I don’t think anyone will ridicule him for it,” Elisashvili told reporters. “It will be ridiculous if he clings to the door of his cell and refuses to leave.”

Another opposition group, Lelo, proposed an alternative way of ensuring Melia’s swift release before the amnesty bill is passed: for European Parliament members step in as guarantors, vouching for Melia if he is released.

The UNM said it would agree to that, but Georgian Dream is against, saying it goes beyond what the parties agreed to under the EU-brokered deal. A quick fix to the situation thus remains unlikely.

The case against Melia goes back to June of 2019, when an appearance by Russian lawmaker Sergei Gavrilov in the Georgian Parliament triggered mass protests. During the clashes, riot police maimed several citizens in what has become known as the “Gavrilov Night.” Melia, who took part in the protests, was charged with inciting violence, accused of trying to lead a crowd to storm the parliament building.

The Georgian Dream-dominated parliament later suspended Melia’s legislative immunity and a court ordered him to wear an electronic monitoring bracelet pending his trial. The move was widely seen as excessive given that the court had little grounds to worry that Melia would try to escape prosecution.

Following last fall’s parliamentary elections, which opposition parties accused Georgian Dream of stealing, Melia publicly removed his bracelet and threw it away. The standoff was exacerbated when the authorities controversially put Melia in pre-trial detention in February. Then-Prime Minister Giorgi Gakharia resigned ahead of the first attempt to arrest him, saying he opposed the move, but then the authorities went ahead under Gakharia’s replacement. The government has since refused to free him, as dropping the charges would make it obvious that courts in Georgia follow the orders of the ruling party.

The EU-proposed amnesty provides a face-saving, longer-term but compromise solution to Melia’s release, as it would allow all sides to stick to their positions on what the case is about. But the amnesty also proposes pardons for all lawsuits and investigations linked to June 2019 protests, and UNM says Georgian Dream will try to use it to secure pardon for riot policeman who inflicted grave bodily injuries to protesters on Gavrilov Night.

Some victims of police violence from the protests, including a young woman who lost her eye after being hit by a rubber bullet, have spoken up against the proposed amnesty bill. “We believe that the amnesty will be passed to benefit the government’s interests and will give them an opportunity to evade responsibility,” a group of victims said in a joint open letter.

Those opposition groups that signed the EU-brokered deal, though, argue that under both the Georgian constitution and international conventions the amnesty cannot be extended to grave crimes, and thus the amnesty bill is the best solution to the Melia situation.