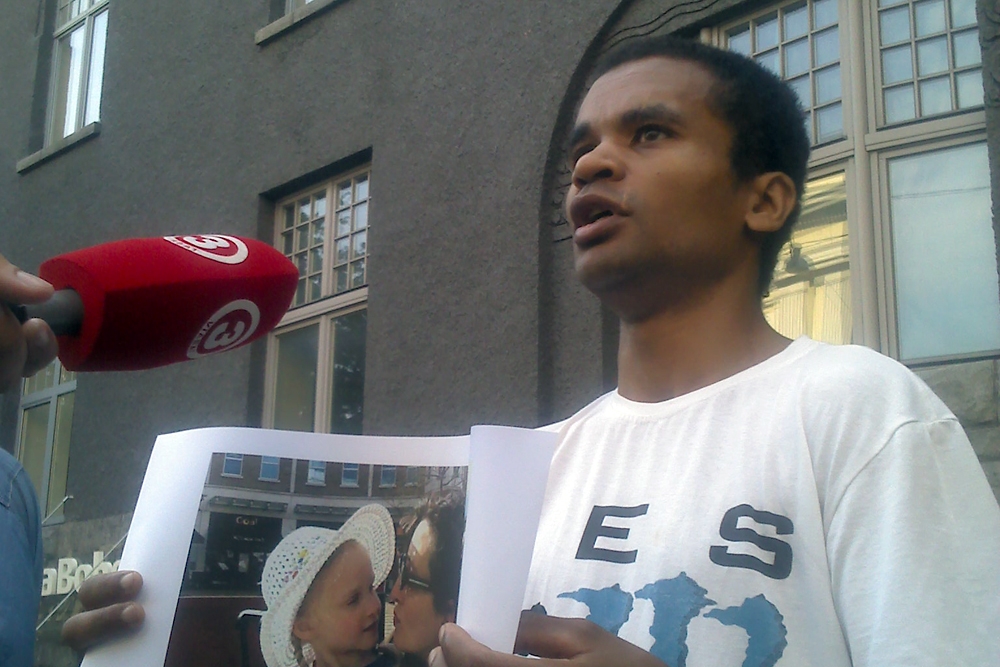 Aijo was arrested on charges of plotting to overthrow the government of Latvia. (Photo: Mike Collier)

It's not often that a senior government minister in a European Union member state makes an overtly racist joke on live TV, still rarer that he keeps his job and indeed escapes any sort of censure after doing so.

But that’s what happened when Latvia’s interior minister, Rihards Kozlovskis, quipped back in May that a trouble-making citizen should be shipped off to a Caribbean island. “If we still had Tobago, maybe we could send him there!” Kozlovskis said. At the time, the interviewer didn’t challenge the statement, and, a few hours later, the minister issued a vague apology and that was the end of that.

Tobago, an island in the Caribbean, was briefly an overseas colony of the Duchy of Kurzeme during the 17th century. Kurzeme is today the westernmost region of Latvia.

The man Kozlovskis was joking about is Beness Aijo, a Latvian citizen and self-styled revolutionary who had just been arrested on charges of plotting to overthrow the state. In an unusual twist for Latvia, where ethnicity is of such paramount importance it is included in passports, Aijo is black.

A fair deal has been written about Aijo in the Latvian, Russian and, most recently, the UK press. Various news outlets have depicted him as a dangerous terrorist, a Russian agent, a Guevara-type revolutionary and a traitor. It says a lot that not even his name is reported consistently: sometimes it is rendered as 'Aijo Beness' sometimes 'Beness Aijo'.

In order to find out more about this enigmatic figure, Eurasianet.org met Beness Aijo – his preferred name - in a Riga park shortly after he reported to police, as he must do twice a week while he remains under investigation for supposedly threating to overthrow the Latvian state while on a recent trip to eastern Ukraine, currently the scene of separatist tumult.

Sitting on stone steps and speaking with a machine-gun delivery, his answers tended to devolve into Leninist rants of anti-bourgeois rhetoric. Small and slight, he looks more like a biology student (he studied medical microbiology at Birkbeck, University of London) than a soldier of fortune.

“My heroes are Marx, Engels, Lenin, Stalin and among modern left politicians, Eduard Limonov [of Russia's banned National Bolshevik Party],” Aijo said. He denied any intention to topple Latvia’s government, insisting instead that “global revolution” could be achieved by peaceful means.

“When I was in Donetsk and Donbass I criticised Latvia about poverty, discrimination, joining the EU, and so on. This is why the Latvian government was angry,” he said.

“Now power in Latvia is concentrated in the hands of the bourgeoisie and far right political parties. They try to make conflicts between the different national groups. We should fight for the democratic liberation of Russian-speaking people in Latvia, to raise salaries, to leave NATO, and to unite Latvians and Russians in communist social justice.”

There is something curiously old-fashioned in the way Aijo speaks so idealistically about the Soviet Union, as if the Berlin Wall had never fallen, the horrors of the Gulag had never been exposed and countries from the Baltic to Central Asia hadn't gained independence. YouTube clips of him speaking to crowds in the Donbas testify to the fact that he is a throwback activist, almost a karaoke version of an old Bolshevik.

Aijo was born in Rezekne, a town in eastern Latvia with a mainly Russian population. His mother is a Russian with whom he is clearly close; his father is a Ugandan scientist who came to Soviet Latvia on an exchange program. “I was the only black person I knew growing up. But Soviet society was based on clear principles of human rights, and there was no racial abuse or abuse towards people of other nationalities,” he recalled. “I was very disappointed when the Soviet Union broke up.”

Aijo's gadfly views are certain to cause widespread offense in Latvia, particularly to those whose own experiences under Soviet rule were less rose-tinted than his. But he has backed up his beliefs with actions, launching his career as an activist, and his arrest record, by setting off smoke bombs during a visit to Latvia of George W Bush in 2005. He also popped up in Palestine in 2013 and then showed up in Ukraine's breakaway regions this year, first in Crimea. There, he joined a local pro-Russian militia unit. “They gave me a uniform and a gun, they showed me how to use it and they put me on duty. I never used the gun,” he said. “They sent me to guard a military base.

“When Crimea voted to join Russia, the military commander told me, ‘We don't actually need you now,’ so I decided to go to Donetsk because I was getting a lot of messages on Facebook from people there,” Aijo said.
After several weeks in eastern Ukraine, during which he posed in uniform, he was eventually arrested and deported. He claimed he was beaten along the way, but doesn't seem to hold any particular grudge about it.

Looking at his watch, Aijo said he must soon leave to attend another demonstration, this time outside the British Embassy in Riga concerning a Latvian girl taken away from her mother, Laila Brice, by UK social services more than eight years ago. One gets the feeling he might only be truly happy when chanting a slogan or waving a placard against bourgeois imperialism – even as he says he wants to himself return to the UK for a job.

An armchair psychologist might suggest that Beness Aijo suffers from Stockholm syndrome, as his claim that he never once encountered racism in the Soviet Union seems barely credible. They might draw attention to the disappearance of his father back to Uganda around the same time the Soviet Union crumbled. But in the absence of any calls to look into the reasons why Beness Aijo holds his strange and jumbled beliefs, he will continue to serve as a reassuringly 'different' bogeyman – the sort that ministers can joke about on TV with no fear of censure.

Mike Collier is a journalist based in Latvia.

The Specter of Red October Still Haunts the Baltics