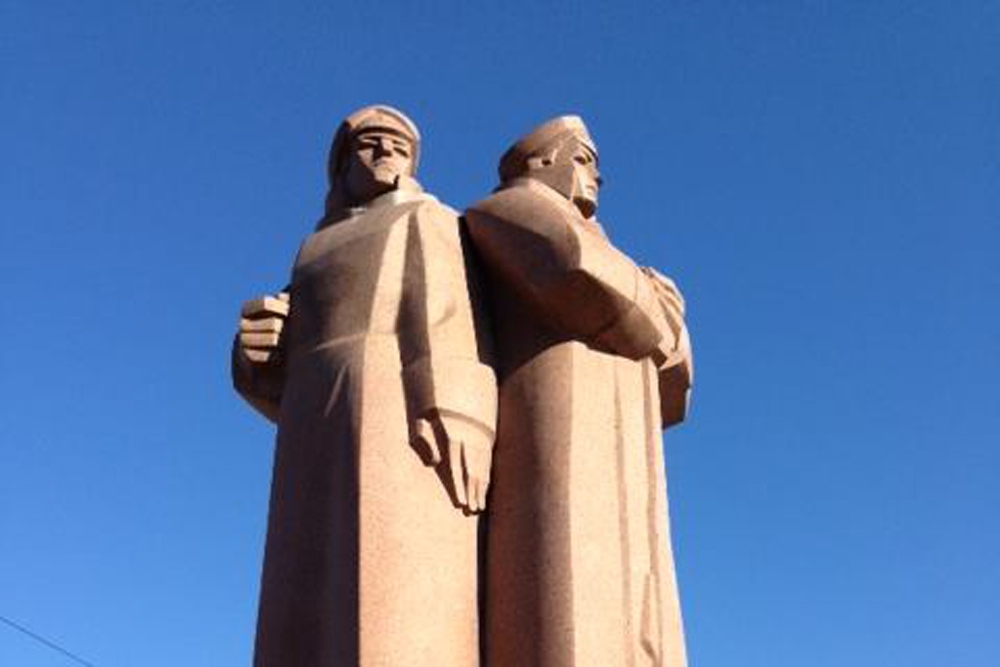 The Soviet-era monument to the Latvian riflemen is situated in Riga’s Old Town. Units of the Latvian riflemen served as shock troops for Vladimir Lenin’s Bolsheviks in the years following their seizure of power in 1917. Are “traditional” values activists in Latvia helping Russian leader Vladimir Putin these days in promoting Kremlin policies that oppose the spread of Western social and economic policies? (Photo: EurasiaNet)

A version of this article originally appeared on Re:Baltica.

Not long after dawn on an early autumn day last year, a group of about 40 people – most of them children accompanied by their fathers – assembled near the central train station in the Latvian capital Riga. They proceeded to board a bus and head for a compound located in a pine forest about 10 kilometers away.
Upon arrival they were greeted by a group of men who distributed laser tag weapons and issued instruction on how to use them. The busload of Riga residents then spent the next few hours playing a guerrilla-war-like game. On occasion, event organizers would shout out to participants to quit fooling around and aim their laser tag weapons at an opponent’s head, instead of at the body.

Participants seemed to enjoy themselves. “A father, a son, a daughter = a brave family” read the caption of a photo posted on Facebook, featuring a family of participants. Another photo showed a smiling father and son decked out in full camo, brandishing massive weapons made to look like real assault rifles.

Organizers billed the outing as just a day of fun and games. But the laser-tag event, and others like it, had another potential benefit: it provided leaders of an organization called Dzimta, or Kin in English, with an opportunity to build up grassroots support for their activities. The group is dedicated to promoting what they see as “traditional values,” while combating what they brand as foreign concepts, in particular tolerance for homosexuality, that have a supposedly corrosive effect on Latvian national identity.

In some respects, the positions promoted by Kin, and similar groups, run counter to Latvia’s civil rights commitments undertaken as part of its membership in the European Union. The values that these groups espouse also adhere closely to social policies championed by Russian leader Vladimir Putin.

Some political analysts in Riga suspect that Russia is somehow supporting the activities of Kin and like-minded groups – either through indirect financial assistance, or via other means. No hard evidence of Russian meddling has come to light. Even so, the Kremlin is clearly interested in sowing division within European Union member states with the aim of making it harder for Brussels to oppose Russia’s geopolitical ambitions in Europe and Eurasia, suggested Andris Kudors, director of the Riga-based Center for East European Policy Studies.

A detailed look at the way Kin operates can shed light on how those promoting traditional values have been making headway in Latvia, especially since 2013 when Russia approved legislation that banned “homosexual” propaganda.

Kin’s founders are Saulus Seikis, a boxing coach, and his wife, Jelena Kornetova, an English-language teacher. The centerpiece of their worldview is a traditional family that rests on the premise that marriage can only involve a man and a woman. In addition to staunch opposition to gay marriage, Kin’s founders bemoan what they portray as the state’s excessive intrusion into family affairs.

According to Kornetova, Kin operates on a shoestring, and makes up with individual initiative and dogged determination what it lacks in funding. The group’s annual financial report showed that it took in just under 2,000 euros in 2014. Kornetova added that the organization comprises 10 volunteers, including individuals with expertise in communications.

The cornerstone of Kin’s activities is public lectures. Videos of such speaking engagements are prevalent on YouTube. Such talks typically focus on what Kornetova casts as stories of “juvenile justice.” Customarily, this phrase is used to mean laws aimed at protecting children’s interests, but the defenders of “traditional” values cast the phrase as an effort to limit parental rights.

In one appearance, recorded during the summer of 2013 at the New Generation Church in Riga, Kornetova warned about the overreach of Latvia’s child protection services, which she claimed intervened into family situations without proper cause to separate minors from their parents. She urged those present never to seek the help of social workers because that would be the “surest” step to the removal of a child from the family.

Kornetova claimed that the activities of child protection services sought to legitimize the “child trade.” As part of her PowerPoint presentation, Kornetova depicted what she claimed were potential “buyers” of children: childless couples, especially those unable to conceive, same-sex couples and pedophiles. “And they want our children, who are beautiful and ecologically clean,” she said.

Such public lectures have helped the organization reach 10,000 potential sympathizers in Latvia, asserted Seikis in an interview conducted with a Lithuanian journalist during the summer of 2015.

Seikis said it was important to teach kids discipline, physical resilience and organizational ability. He described laser tag as “an interactive game” that was essentially the same as a computer game only with added value – kids actually run and exercise.

The group also organizes children’s camps in eastern Latvia, where campers not only draw and sing, but also learn to march in ranks, take part in a parade, and shoot with pneumatic weapons.

The latter activity is led by Eduards Ludzitis, a former policeman, from the youth military camp “Specnaz,” a Russian word used for special-purpose military and Interior Ministry units in the post-Soviet space. In the largest Russian-language newspaper Vesti Segodnya, Ludzitis compared “Specnaz” to the Latvian army’s Youth Guard – but without “excessive patriotism.”

Kin activists have also proven adept at staging PR events. In 2014, the group organized a protest outside the Latvian parliament. The protesters gave each of Latvia’s 100 MPs invitations to a news conference, during which Kin’s leaders outlined each MP’s position on sexual minorities.

As a result of this action, one member of Harmony Party, which draws on support from Latvia’s substantial Russian-speaking community, introduced amendments that ban the “promotion” of sex education in schools. Critics see the legislation as an attempt to criminalize the discussion of homosexuality in Latvian schools.

Inga Spriņģe is an investigative journalist based in Riga. A version of this article originally appeared on Re:Baltica (www.rebaltica.lv/en)