Latvia Torn Between Money and Fear of Russia 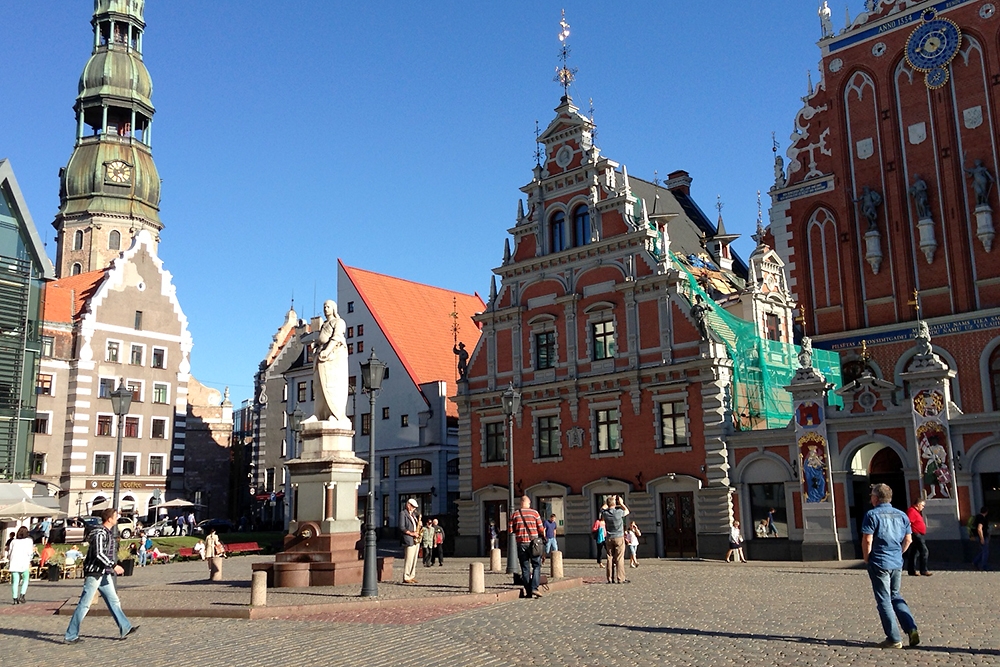 Vitaly Mansky, a prominent Russian documentary director, remembers the moment when he decided he needed a safe haven outside Russia because life in his homeland was becoming untenable.

It was the spring of 2014, and Mansky was watching the news in his hotel room during a film festival in Spain. A dispassionate anchor on a Kremlin-controlled news station reported that Russia’s parliament had authorized President Vladimir Putin to use the army to protect compatriots in other countries, in effect legalizing the annexation of Crimea and providing a rationale for the support of pro-Russian separatists in eastern Ukraine.

“I remember very well the day, hour and second when the decision was made,” said the director, speaking during a recent winter’s morning in the Latvian capital Riga. “After this announcement, ensuing events became obvious. … This was the end. At that moment, I phoned my wife, returned from the festival, we arrived in Riga and after three days we left with a residence permit.”

Having found and purchased a spacious apartment with ornate painted ceilings in the center of Riga in a day, and for a cheap price by Moscow’s standards, Mansky became one of the 3,173 Russian citizens who last year gained the right to reside in Latvia.

The Latvian capital is an hour and a half’s flight from Moscow. The majority of the people speak Russian. But the main attraction for Latvia’s “residency for property” program was, until recently, its relative cheapness compared with similar “golden visa” programs in Europe. For an investment as small as 70,000 euros, foreigners could obtain a five-year Latvian residence permit, enabling free travel throughout most of the European Union.

During the five years of the program’s existence, 13,518 foreigners have obtained residence permits. Unlike similar programs in other European countries, 90 percent of Latvia’s applications have come from citizens of the former Soviet Union, mainly Russia. Over 10,000 Russians have obtained Latvian residency under the program.

For almost a year Re:Baltica, in collaboration with EurasiaNet.org and the Organized Crime and Corruption Reporting Project, collected and cross-matched information from Land, Property and Business Registries in Latvia and analyzed the 315 most expensive real estate deals in Riga and Jūrmala involving foreign investment. The purpose was to obtain a full picture of the people who, during turbulent times in Ukraine and the growing standoff between the West and Russia, have opted for Latvia’s ultra-cheap “golden visa” program. The investigation also strived to determine the origin of the money used to buy properties.

The investigation revealed that over the past year, a majority of buyers of real estate came from Russia’s middle class. The number of applications grew rapidly after the start of the pro-European protests in Ukraine and Russia’s subsequent annexation of Crimea. Twice as many people from Ukraine applied in 2014 as had in the previous year. The wave from Russia picked up after Putin was re-elected president in 2012, and continued at almost the same level last year.

Mansky, who was born in Ukraine, but has spent most of his life in Moscow, is the kind of immigrant who finds it relatively easy to gain acceptance in Latvia – an educated member of the middle class who does not support Putin’s policies.

Officials in Riga have a hard time determining the extent to which dark money is used to purchase property in Latvia, a country with a banking sector that has a reputation for being a gateway to the EU for oligarchs from the former Soviet Union. Money laundering has been an issue in the past. In 2013, Latvian regulators fined an undisclosed bank for laundering money in a case connected to Russian whistleblower Sergei Magnitsky, who died in official custody in 2009.

There are grounds for worries about abuses in the Latvian program. In one prominent case, when Italian police raided the house in Rome of the family of Mukhtar Ablyazov – a political opponent of Kazakhstani President Nursultan Nazarbayev and a fugitive Kazakh oligarch – it was revealed that his wife and six-year-old daughter had been living in Italy with Latvian and UK residency permits. Italian authorities ended up deporting them to Kazakhstan.

According to several sources who spoke on condition of anonymity due to the sensitivity of the matter, prior to Russia’s annexation of Crimea, only a single officer from Latvia’s Security Police was tasked with checking all residency permit applications, which amounted to at least 15 people per day. Funds have now been allocated to add at least four more officers to the review process. But there is currently a substantial backlog.

A large number of Russians who have obtained Latvian residency are connected with medium-sized private businesses, especially in the financial sector. Some are journalists and artists. Satirist Mikhail Zadornov has added to his real estate portfolio an apartment in an Art Nouveau-style building in central Riga. An actress, Tatyana Dogileva, and one of the faces on the popular humor show KVN, Yury Askarov, purchased real estate in Jūrmala.

A small number of permit holders are managers of state-controlled companies or their subsidiaries, particularly those connected with energy giant Gazprom. The family of Alisher Usmanov, named by Forbes as Russia’s richest man, concluded one of the most expensive property deals in Latvia during this period, acquiring a villa in the resort town of Jūrmala. But family members apparently did not apply for residence permits. His wife’s son, who is the legal owner of the property, did not respond to queries from Re:Baltica.

Dmitry Orlov, a political scientist with close ties to the Kremlin and a member of the Supreme Council of Putin’s party, United Russia, denied in a phone conversation that he had received a residence permit, but not the fact that he had bought a property in Latvia, a country regularly criticized by official Moscow. The data in the property register matches Orlov’s name and date of birth. No one answered the apartment’s doorbell in Riga and he ignored subsequent emails.

Several former Russian parliamentarians from Putin’s party, now powerful businessmen, purchased real estate in previous years, and their family members hold residence permits. One is Eduard Yanakov, who apart from a metallurgical business has a stake in Latvia’s Russian-language media. Another is Vladimir Shemyakin, who until recently was a leading official in Gazprom Media Holding, a subsidiary of Gazprombank. Both Shemyakin and Yanakov declined to comment.

Arkady Rotenberg had a residence permit until 2013; he did not apply for its renewal. Arkady’s brother, Boris Rotenberg, acquired a property in a quiet and rich residential area not far from the capital Riga, at Garkalne, via shares in the company that owns the property. He has Finnish citizenship and has not requested a Latvian residence permit.

Individuals who agreed to answer questions from Re:Baltica about their decision to obtain Latvian residency tended to deny their actions were related to the crisis in Ukraine.

“It has been a dream I have had for a long time. The city [Riga] is interesting and I just wanted a little nest there,” explained investor Alexander Rudik who is on the board of directors of a Swedish-owned timber company operating in Eastern Siberia, RusForest.

“Also, there is a good corporate tax system for business in Latvia, and I will consider whether I should transfer a part of my business operations there,” Rudik continued. “I am not thinking about living in Latvia permanently, it is more a summer home thing. I will seek a residence permit though, as it is useful for travelling freely around Europe.”

Meanwhile, Mansky, the film director, suggested that many see a residency permit as a hedge against arbitrariness. “Everyone has their own reasons. Maybe there are some who are fleeing Russia, but Riga is not the safest place either ideologically or geographically,” he said, referring to the latest wave of Russian migration. “In a country [Russia] that is dependent on one person, absolutely anything can happen. And not at some other time, but in five minutes’ time. We are talking with you here right now, but in five minutes’ time, we may find out that exit visas have been introduced, and this will not be anything surprising. This may or may not happen, as there is no dialogue with society. There is no civil society as such.”

With the escalation of the war in Ukraine, Latvians are becoming increasingly sensitive about the ethnic make-up of residence permit applicants. Those concerns are linked to the past. Fifty years of Soviet occupation caused a substantial demographic shift: these days, Russian-speakers account for over one-quarter of Latvia’s population. A large portion of the Russian-speakers do not hold Latvian citizenship and Latvians suspect them, unfairly or not, of being disloyal to the country and sympathizing with Putin’s Russia.

Nationalist-oriented Latvian politicians have been alarmed by the Russian government’s rhetoric about protecting compatriots abroad, and have voiced a desire to alter, if not stop altogether, the residence permit program. “By continuing to issue residence permits to Russian citizens, we are playing Russian roulette in the true sense of the term,” center-right National Alliance MP Edvīns Šnore announced in Latvia’s parliament last year.

In May 2014, the parliament increased the real estate purchase price threshold from 70,000 euros to 250,000 euros, which is equal to the next cheapest residence via property investment in Europe, in Greece.

The new threshold and the dramatic fall in the value of the Russian ruble have meant that the number of purchases by Russian citizens has fallen rapidly in recent months. Applications for 67 permits have been lodged since last September, when the new legislation came into force.

But with the rapid cooling of the Latvian economy, real estate lobbyists are pushing for easing the requirements. An MP from the ruling party, Unity, has submitted a bill that would lower the threshold below the initial level of 70,000 euros.

These days, Latvian authorities do not seem overly concerned about the possible influx of dark money from abroad. Instead, they are concerned about the possibility of newcomers undermining state security. “The law which is currently in force has reduced potential risks. Looking at it from the aspect of national security, I cannot see the need to make any changes,” said Normunds Mežviets, the chief of Latvia’s Security Police.

Inga Spriņģe and Sanita Jemberga are investigative journalists based in Riga. Ilze Jaunalksne in Riga, Olesya Shmagun in Moscow and Elena Loginova in Kyiv contributed to the report. The research project involved the collaboration of Re:Baltica, The Organized Crime and Corruption Reporting Project and EurasiaNet.org