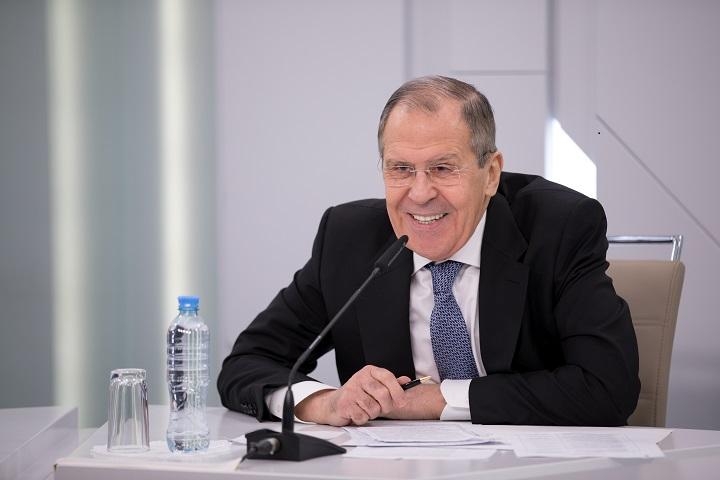 Russian Foreign Minister Sergey Lavrov speaks April 21 at a forum in which he discussed, to some controversy, the Nagorno-Karabakh conflict. (photo: mid.ru)

With some blunt remarks, Russia’s top diplomat has managed to put his counterparts in both Armenia and Azerbaijan on the defensive, with the latter apparently under threat of losing his job.

The week-long (and counting) controversy began when Foreign Minister Sergey Lavrov spoke at a public forum in Moscow on April 21. It was the morning before his counterparts from Armenia and Azerbaijan held a videoconference as part of the two countries’ negotiations to resolve their conflict of nearly three decades.

Lavrov was asked about the progress of peace talks and he took the occasion to suggest that the first steps of a resolution of the conflict would have to be made by Armenia.

The discussions over the years have “envisaged a movement toward a resolution on the basis of a phased approach, with the first step the solution of the most pressing problems, the liberation of several regions around Nagorno-Karabakh and the opening up of transportation, economic, and other ties,” Lavrov said.

That one line contained two diplomatic bombs, both dropped on Armenia: the “liberation of regions” and the “phased approach.”

This “regions” bit was a reference to the territories that Armenian forces control that are outside the Soviet-legacy boundaries of Karabakh. The Armenian side originally envisaged those territories merely as a security belt and bargaining chip but have increasingly come to see them as an integral part of Karabakh, and something they do not intend to give back.

Azerbaijan, meanwhile, sees the territories’ return as the first step of the “phased approach” to which Lavrov referred. The large majority of the over 600,000 Azerbaijanis displaced by the conflict come from those territories, many of whom harbor hopes of returning back. For Armenia, if they were to give back some territories it would only be as part of a package deal – that is, a broader agreement which would also immediately give Armenia something concrete in return for its concession.

Recent discussions, at least as far as the public has been able to see, have not been advanced enough to have resolved the package-deal-vs.-phased-approach debate. Most likely, Lavrov was suggesting how he thought the conflict needed to be resolved rather than offering a dispassionate analysis of the state of negotiations.

But his statement fed into a persistent fear among Armenians that successive governments have been secretly negotiating concessions that would be unacceptable to most Armenians. Those fears have been heightened – and manipulated by the opposition – since the coming to power of Armenia’s new, relatively liberal regime in 2018.

And so Lavrov’s statement caused an immediate furor in Yerevan.

The former ruling Republican Party of Armenia issued a statement saying that during its years in power, “a phased approach was never discussed, moreover we considered it unacceptable, impossible to implement and we categorically refused it.”

Armenian Foreign Minister Zohrab Mnatsakanyan was forced to respond. “There will be no one-sided compromises,” he told reporters. “The top priority for the Armenian sides is security. As for the territory that Lavrov mentioned, it is among other things a security belt and defensive line. In no way could Armenians even imagine endangering the security of the people of Nagorno-Karabakh.”

The foreign ministry’s spokesperson, Anna Naghdalyan, elaborated in an interview with Russian newspaper Kommersant, noting that Lavrov had referred specifically to talks in Moscow in April 2019. The results of that meeting “were summarized in a joint statement by the foreign ministries of Armenia, Russia, and Azerbaijan and the co-chairs of the Minsk Group of the OSCE [the international body mediating the peace talks], in which the contours of the negotiation were given, and it does not contain a reference or even a hint of a phased resolution.”

While the Armenian anger was predictable and understandable, the reaction in Azerbaijan has been more mysterious.

One might have expected Baku to take a victory lap, given that perhaps the single most important country’s foreign minister had expressed a position explicitly favorable to its side. (And not for the first time: Lavrov has publicly weighed in on issues of the conflict several times in the recent past, more often on Azerbaijan’s side, but not only.)

Instead, however, Lavrov’s comments set into motion a smear campaign against Foreign Minister Elmar Mammadyarov for allegedly responding too weakly to Mnatskanyan.

There have been no fewer than three articles in Haqqin, a news website linked to Baku’s security services, attacking the foreign ministry or Mammadyarov personally. Haqqin has a long reputation for publishing hit pieces against figures who are soon to be fired or expelled or otherwise removed from Azerbaijani public life.

All three pieces were interviews with members of parliament who unloaded against the country’s diplomats; one was headlined “Why is the MFA retreating from the Armenians?” another “Toothless Mammadyarov unable to support Ilham Aliyev,” Azerbaijan’s president, and the third “It’s as if Elmar Mammadyarov is covering up Armenia’s policy of occupation.” (Adding to the intrigue: the third story was deleted from the site not long after publication.)

Lavrov’s comments seem to be less of a reason for this smear campaign and more of a pretext. Mammadyarov has long been seen as ineffective and a poor communicator, and has lately been overshadowed by his former spokesman, Hikmet Hajiyev, who was promoted to be Aliyev’s top foreign policy adviser and has since become Baku’s clear foreign policy leader. This may simply be the excuse the administration needs to push Mammadyarov aside.

The chef’s kiss on the whole affair was a statement issued by Russia’s foreign ministry on April 23 in response to a query from Azerbaijani media. In it, Moscow complained that “the topic of the resolution of the Nagorno-Karabakh conflict is quite delicate, and to move it to the sphere of public debate is counterproductive.” No mention was made that it was in fact the MFA’s head, Lavrov, who himself introduced all of this to the public debate.

It then added, as if an afterthought, that “the issue of the resolution should be considered in the process of the negotiations in the framework of the current format.”

This mention of a “current format” was a third bomb dropped on Armenia, which has been trying to change the structure of the negotiations from a bilateral one – Armenia and Azerbaijan – to trilateral, including the de facto leadership of Nagorno-Karabakh, the Armenian-controlled territory that is at the heart of the dispute between the two sides.