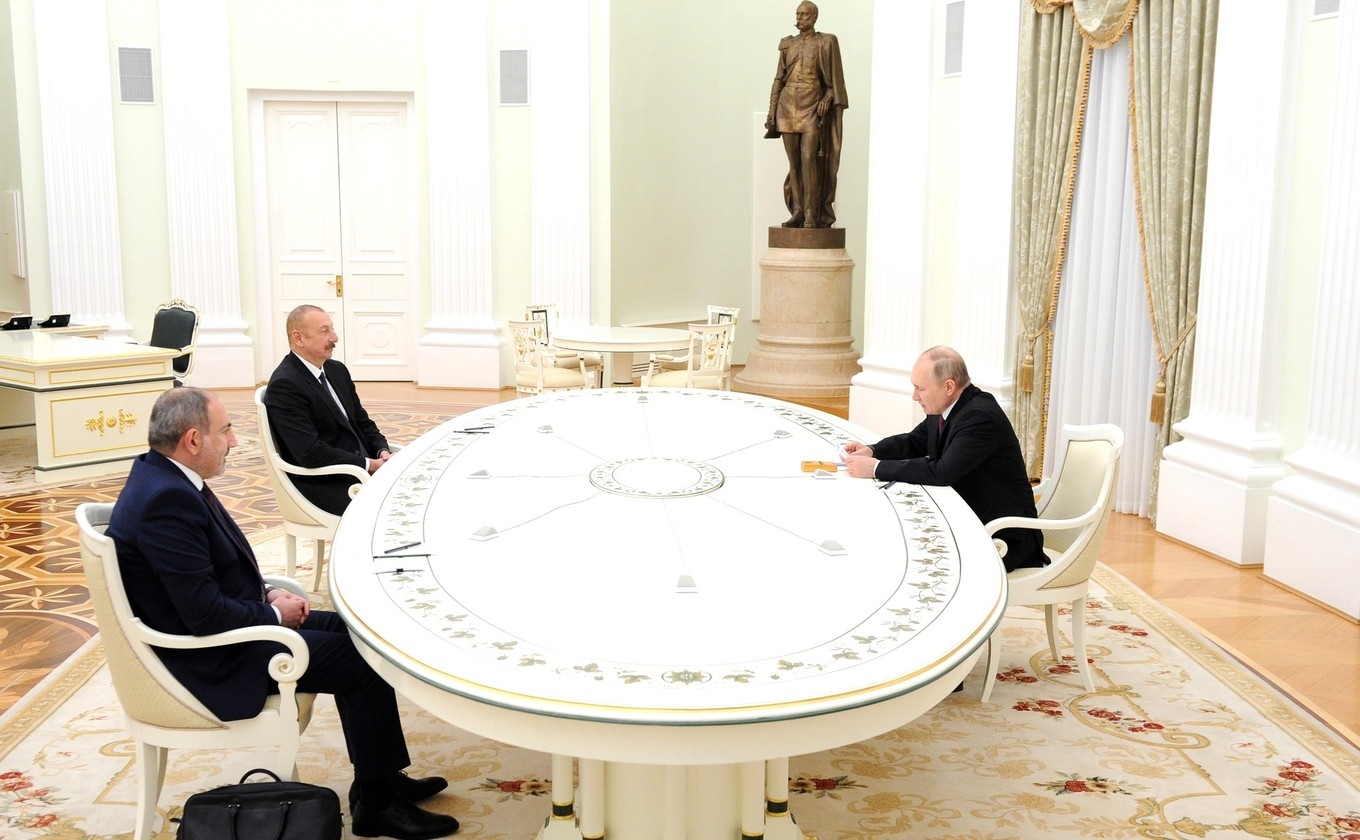 The leaders of Armenia, Azerbaijan, and Russia meet for the first time since last year's war in the Caucasus. (photo: kremlin.ru)

The leaders of Armenia, Azerbaijan, and Russia have met in Moscow in their first summit since last year’s war in the Caucasus, and agreed to create new, joint transportation infrastructure.

Russian President Vladimir Putin hosted Armenian Prime Minister Nikol Pashinyan and Azerbaijani President Ilham Aliyev, and the three men met for about four hours. Following the talks they made a joint press appearance and released a four-point agreement to create a list of projects to begin working jointly on “unblocking” the region’s borders.

What specific projects might be under consideration were not yet clear. The November 10 ceasefire agreement that ended the war between Armenia and Azerbaijan, signed under Russian brokerage, stipulated that a new corridor would be opened through southern Armenia to connect Azerbaijan’s mainland with its exclave of Nakhchivan. Ahead of the meeting, Pashinyan’s spokesperson Mane Gevorgyan said that other projects were under discussion as well, including those aimed at letting Armenia transit through Nakhchivan to Iran and to use the existing railroad through Nakhchivan that, in Soviet times, used to connect Yerevan with southern Armenia.

Under the tripartite agreement signed January 11, the three countries will form a working group led by the deputy prime ministers of each country, and expert groups under that. They will be working on a quick schedule: the working group will meet by January 30 and within a month after that the expert groups will come up with a list of projects. By March 1, they will present the projects to the three countries’ leaderships for approval.

“I’m sure that the implementation of agreement will benefit both the Armenian and Azerbaijani people, the region as a whole, and Russia,” Putin said following the signing of the statement.

The new projects could dramatically reshape the region, as Armenia’s borders with both Azerbaijan and Turkey have been entirely closed since the first war between the two sides in the 1990s. That has meant that Armenia has open borders only to its north, Georgia, and south, Iran. Azerbaijan’s isolation has not been as extreme but it faces inconveniences in connecting Nakhchivan with the rest of the country.

The meeting was the first for the two foes since the war last year. Putin greeted each of his Caucasus counterparts with a handshake and a bro hug, but Aliyev and Pashinyan merely nodded at each other and said “zdravstvuite.”

Following the talks, Putin stood between the two of them as they made statements in turn. Aliyev took an optimistic approach, saying that the conflict was over, the November 10 agreement was “being implemented successfully” and that the transportation agreement would offer a bright future.

Pashinyan took a darker tone, saying that the conflict remained unresolved and taking issue with Aliyev’s (and Putin’s) satisfaction with the implementation of the November 10 deal. “Unfortunately, we did not solve the issue of prisoners of war today, and it is the most sensitive and painful issue. We agreed to continue the work in that direction,” he said. He did offer praise for the new transportation deal: “The economic innovations can lead to more reliable security guarantees, and we are ready to work constructively in that direction.”

Aliyev and Pashinyan entered the meeting from very different domestic circumstances. Aliyev is riding high after the decisive military victory, which saw Azerbaijan regain control of a significant amount of the territory in and around Nagorno-Karabakh that it had lost to Armenians during the first war between the two sides in the 1990s.

Pashinyan, meanwhile, is fighting for his political life, and ahead of the meeting his many opponents sought to take advantage. Many claimed (with no basis) that he would be meeting with Aliyev to arrange new territorial concessions, and he was no doubt forced to consider his domestic weakness as he negotiates with his two counterparts.

On the morning that Pashinyan flew to Moscow, protesters attempted to block the road to the airport to prevent him from being able to leave, though they didn’t succeed.

Vazgen Manukyan, whom a coalition of opposition parties have put forward as a candidate to replace Pashinyan, announced that the prime minister “does not represent Armenia and Nagorno-Karabakh” and that “any decision that runs contrary to the interests of Armenia and Nagorno-Karabakh will be recognized as illegitimate and will be canceled” following Pashinyan’s departure.

Aliyev likely had a much freer hand in the negotiations, but was facing expectations that he would do something to limit what Baku has seen as a sympathy toward Armenians on the part of the Russian peacekeeping contingent that is enforcing the ceasefire agreement. “Sanctions should be stipulated for a peacekeeping mission if it goes beyond its mandate,” government-friendly political analyst Qabil Huseynli told the website JAMNews ahead of the meeting.