There was much to discuss just over a year after the end of the war, including ongoing border tensions, plans to reopen borders and transportation, and the fate of Armenian prisoners. 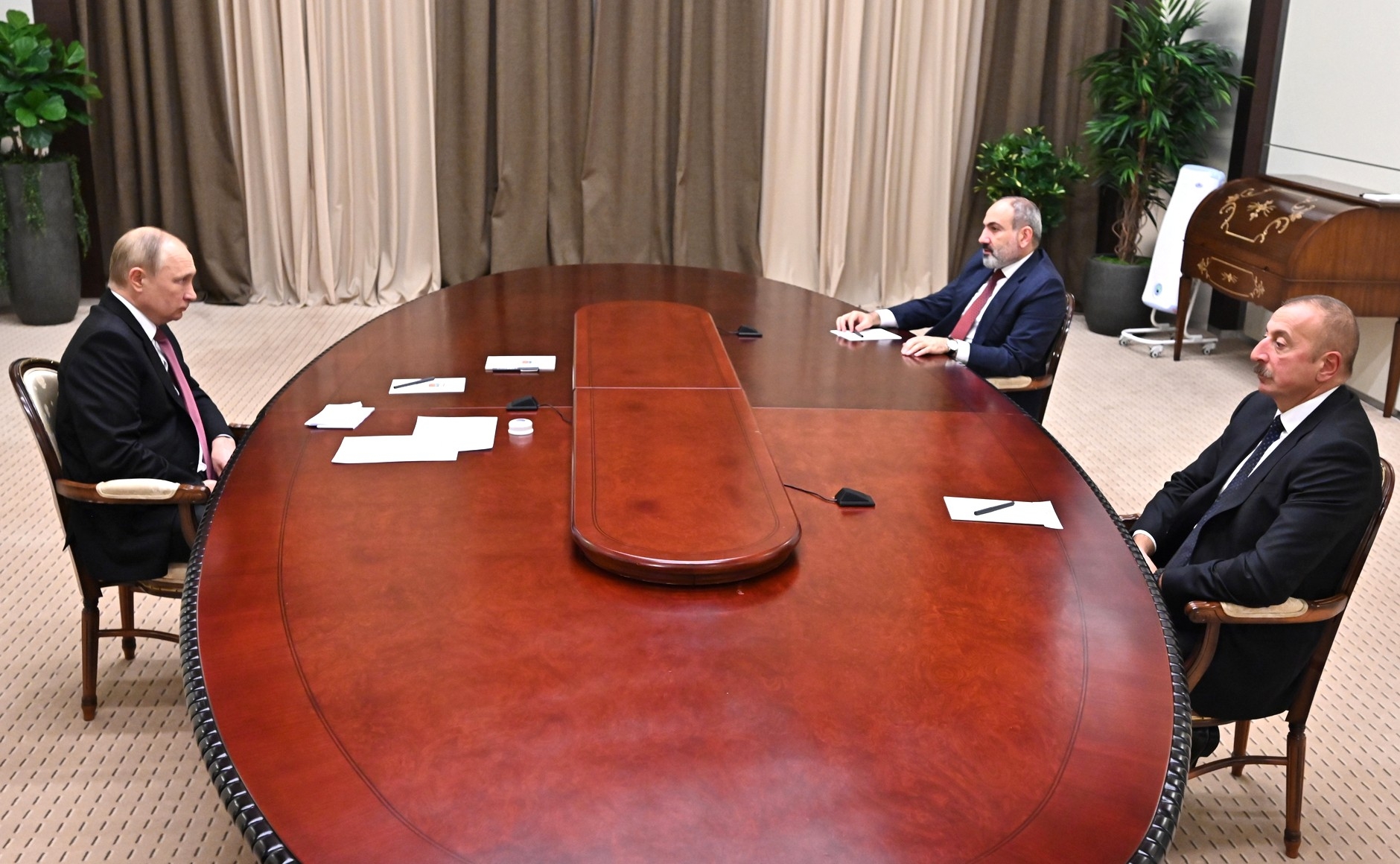 The leaders of Armenia and Azerbaijan have met for the first time in nearly a year, and the second time since they fought a war last year. While they did not sign long-awaited agreements to reduce ongoing tension between the two countries, they did formally promise to form a bilateral commission to delimit and demarcate their mutual border.

Azerbaijan President Ilham Aliyev and Armenian Prime Minister Nikol Pashinyan met, along with Russian President Vladimir Putin, in Sochi on November 26. The three had plenty to discuss, as several issues continue to divide the two countries a little more than a year after the war: ongoing border tension, plans to open up borders and transportation links, and Armenian prisoners of war still being held in Azerbaijan.

Putin met first with Aliyev one-on-one, then Pashinyan joined them, then Putin met Pashinyan without Aliyev. The public part of the trilateral meeting took place, as had the first one, with Putin on one side of the table and the two Caucasus leaders on the other side, barely acknowledging one another.

In spite of sharply rising tension between the two sides, including heavy fighting less than two weeks earlier, Putin chose to accentuate the positive that has been accomplished since he brokered a ceasefire on November 9, 2020. He highlighted the fact that 53,000 [Armenian] refugees have returned to their homes following the fighting; that the 2,000-strong Russian peacekeeping contingent now stationed in Nagorno-Karabakh is working “with high marks from both sides,” and that “large-scale military activities have not taken place.”

Both Pashinyan and Aliyev heaped praise on the Russian peacekeeping mission, despite discontent with the peacekeepers from both sides. Armenians resent their failure to stop Azerbaijan from continuing to lay on pressure, and from Azerbaijan for the fact that they are in effect preventing them from completing takeover of the rest of their territory. (Notably, while Azerbaijani officials including Aliyev regularly describe the Russian presence as “temporary,” Aliyev didn’t use that word to Putin’s face. “We hope that next year that work [of the Russian peacekeepers] will be continued and there will be more good results,” he said in his one-on-one with Putin.

Putin said the meeting would be devoted to discussing the “revival” of the region, “so that people can feel safe and carry out economic activities normally, can develop the economy.”

There was much speculation ahead of the meeting that the three would sign additional agreements, in particular one on formally delimiting and demarcating the borders between Armenia and Azerbaijan, and another on opening up new transportation routes between the two countries, most notably a route through Armenia connecting Azerbaijan’s mainland with its exclave of Nakhchivan.

While they did not do that, they did sign a document that expressed their intention “to work toward the creation of a bilateral commission on the delimitation of the state border between Armenia and Azerbaijan and its subsequent demarcation, with Russian consultation upon request of the sides.”

Putin said the commission would be formed by the end of the year.

Both sides were reportedly ready to sign new agreements on November 9, the one-year anniversary of the ceasefire signing, but Pashinyan pulled out.

Putin said that “very soon” an agreement on transportation would be reached, and he emphasized Russia’s own interest in that happening. “My colleagues have briefed me on how the work is going – it’s difficult, but nevertheless this work is in an advanced stage,” he said.

Following the meeting, Pashinyan also said that the sides were very close to an agreement on transportation, but didn’t offer details.

“It was a very positive meeting, we discussed practically every issue on the agenda. We clarified our positions on many issues. It turns out that on a host of issues we don’t have any disagreements. On the issue of the opening of transportation and economic communications in the region we determined that we have a common understanding of how those communications will work,” he said.

Pashinyan and Aliyev are meeting again soon: in Brussels on December 15, under the aegis of the European Union. That meeting actually had been announced ahead of this one, and many regional analysts interpreted the hastily arranged Moscow meeting – it was announced only four days ahead of time – as Russia’s desire to maintain as much control as possible over the process.

The multiple negotiation platforms represent a sort of low-intensity geopolitical metastruggle over the resolution of the conflict, which Russia has largely dominated since last year’s war but with occasional interventions by the United States and Europe.

The last meeting between the two men also took place with Putin’s mediation: on January 11 they met in Moscow and set up a trilateral commission (made up of the deputy prime ministers of the three states) to work out the details of the transportation plans.

That commission is planning to meet the following week to "summarize and report on the decisions that were agreed today," Putin said following the meeting.

Note: This piece has been updated to include new information about the document signed by the three sides and new comments by the participants.