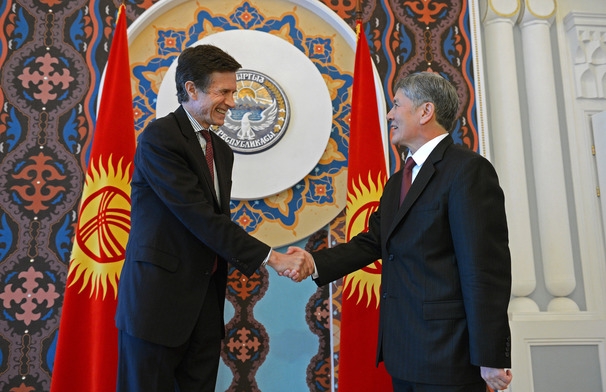 The U.S.'s top diplomat dealing with Central Asia, Robert Blake, visited Kyrgyzstan last week and if we are to believe Press.kg, all over Bishkek, "even in schools and kindergartens, for three days they are saying 'Blake is coming! Blake is coming!'" Journalistic hyperbole aside, this was a highly anticipated visit, as it seems that negotiations over the U.S.'s Manas air base are starting in earnest. Before Blake left, he told Voice of America's Russian service that he would be discussing extending the lease for the base, which is now scheduled to expire in 2014. "Manas has a huge significance for the U.S. from the point of view of logistics," he said.

In Bishkek, Blake met with President Almazbek Atambayev and other officials, and while of course the details of the discussions were not divulged, Blake did make an interesting statement to the press after his meetings. He was asked if the U.S. might use the newly established French transit center in Shymkent, Kazakhstan, and he didn't say no. After it's determined what sort of U.S. troop presence there will be in Afghanistan after 2014, the U.S. will assess what sort of facilities it needs in Central Asia, he said:

Once those important decisions [on troop presence in Afghanistan] are made, then we’ll be in a better position to plan for ourselves what kind of facilities we might need either in Afghanistan or in the wider region. Again, I don’t want to speculate on the future of what those might be.

This was widely regarded, especially in the Russian press, as suggesting that the U.S. might be looking for new transit centers/bases, but it seems more likely an excess of caution on Blake's part in trying not to say anything concrete.

Is Atambayev's stance just a bargaining position? If he's just trying to raise the rent, would the U.S. really walk away from Manas and set up another transit center elsewhere in Central Asia at this late juncture? As it was the last time these sorts of negotiations took place, Russia is the wild card. Moscow has not been shy in trying to push the U.S. out of Kyrgyzstan: it has offered to help Kyrgyzstan turn the base into a civilian cargo transport hub (which is Atambayev's wish for Manas) and announced a massive military aid program, apparently aimed at showing Bishkek that it is better off with Moscow than with Washington. A piece last week in the Russian newspaper Nezavisimaya Gezeta suggested that if the U.S. left, Russia would have to make up the loss of $60 million in rent (as well as other aid that is presumably tied to the base's presence). Ergo, all this is sounding a lot like 2009, when Russia gave Kyrgyzstan a huge aid package, Kyrgyzstan said it would kick the U.S. out of the base, and after the U.S. offered more money Bishkek relented. The difference this time is that the stakes are lower: after 2014 the U.S. will be transiting fewer troops in and out of Afghanistan than they will have for the five years previous. So will that mean the U.S. could walk away this time?